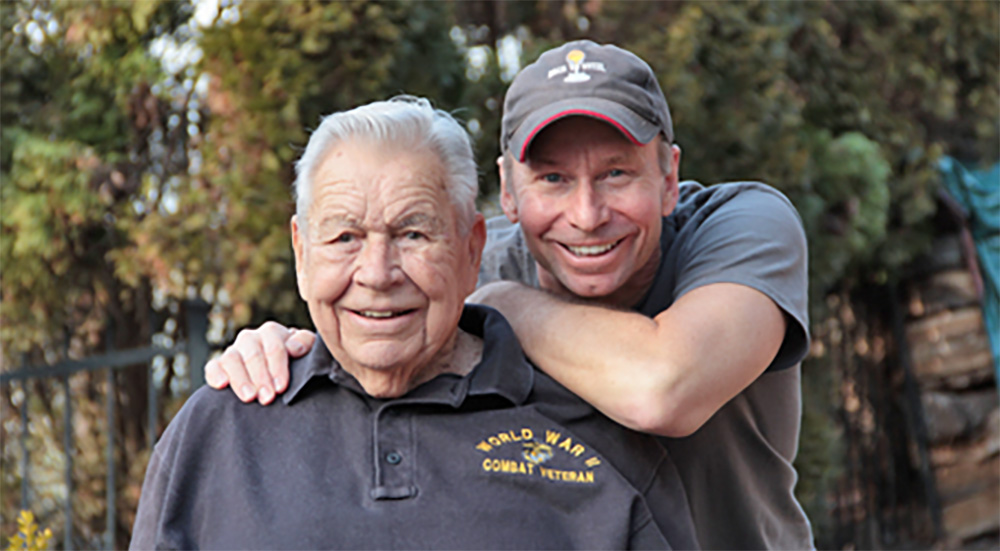 At 101 years old, Kohler is also a participant in the Program of Comprehensive Assistance for Family Caregivers, one of several VA programs dedicated to supporting Veterans by providing resources and services to their caregivers.

Kohler’s story is one of remarkable triumph. A native of St. Louis, Missouri, he entered the Marine Corps shortly after the attack on Pearl Harbor. Kohler’s brother, who needed permission to leave high school early, followed him into service. Together, the two completed basic training and later served on Iwo Jima.

His brother lost his life in the same battle that left Kohler nearly fatally wounded.

The brothers’ legacy led Kohler’s son Keith to become an American military history buff. After becoming his father’s caregiver in 2013, he became the frontrunner in preserving his father’s story while providing him with life-sustaining caregiver support.

“Having the privilege of living with and caring for my father, I became more and more immersed in his military history, learning the smallest details of his heroism in WWII’s largest battles,” said Keith.

“He was nearly mortally wounded and left-for-dead but miraculously rescued during the invasion of Iwo Jima. I am determined to provide him the dignity and respect he deserves by connecting my dad to many overdue benefits with VA,” said Keith. “VA has stepped in to support my dad… and me… with various programs to ensure my father receives the quality care and attention he earned long ago on the battlefields of WWII.”

Calling Caregiver support line was the greatest thing I did.

For Keith, CSP’s resources became a critical line of support, both within his role as a caregiver and for finding balance in his own life.

“The greatest thing I did was call the VA Caregiver Support Line as I was at my wits end emotionally, spiritually and financially,” said Keith. “Thanks to various VA programs, I can have other caregivers tend to my dad, too.”

Here is a short documentary about his father’s and his brother’s courage and valor in WWII:

Kohler recently celebrated his 101st birthday with his local CSP team in St. Louis, who proudly supports Kohler and his caregiver Keith. The two end each night by reciting the same four words: “I’m proud of you.”

The Program of Comprehensive Assistance for Family Caregivers provides resources, education, support, a financial stipend, health insurance (if eligible) and beneficiary travel (if eligible) to caregivers of eligible Veterans who have incurred or aggravated a serious injury in the line of duty on or before May 7, 1975, or on or after Sept. 11, 2001.

On October 1, 2022, PCAFC will become available to eligible Veterans of all service eras and their caregivers. All caregivers of Veterans enrolled in Veterans Affairs healthcare can receive support through the Program of General Caregiver Support Services (PGCSS). For more information about PGCSS and PCAFC, visit the Caregiver Support Program’s website or contact your local CSP team.