Vietnam Veteran Discovers VA Care When he Needs it Most 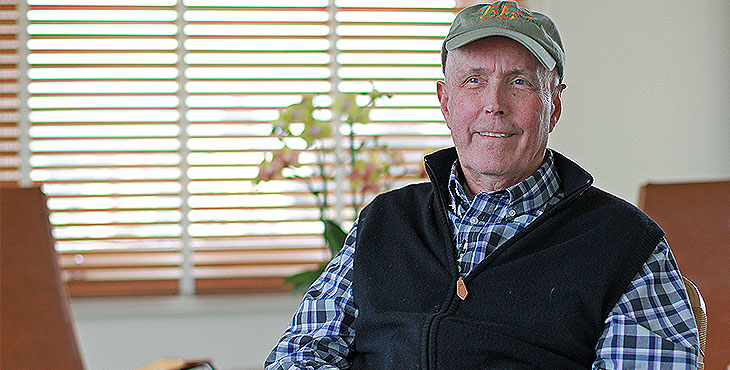 Dr. Thomas Russell smiles every time the subject of his naval service comes up. He sits up a bit straighter in his chair as he recalls his time on the USS Ticonderoga during the Vietnam War, and how he felt about the men he cared for as the aircraft carrier’s flight surgeon.

“I was assigned various squadrons of pilots, and my job was really to make sure that [they] were safe,” he says. “It was very important for the flight surgeon to really integrate themselves and to really associate with the pilots; so if there was a problem, they would feel free to come to [me].”

He lets out a small chuckle when he realizes how much he used to fly in his younger days on the South China Sea.

“I probably wouldn’t have the nerve to do it today, but I did a lot of flying on and off that carrier,” he says. “I loved the Navy.”

Almost 50 years later, Russell sits at the dinner table of his sister’s apartment in San Francisco. He’s trying to cut bread with a set of oversized silverware, but his left hand won’t cooperate.

A tumor, which led to physicians taking out a part of Russell’s brain, left him “hazy” and unable to perform daily tasks. A few weeks ago, while he was out for dinner with friends, he realized that cutting food had become too problematic for him. Somebody else had to cut up his steak that night, and it didn’t sit well with the former surgeon and U.S. Navy Veteran. Now, he’s practicing with bread to regain mobility and function.

“You take things like this for granted when you’re young and healthy,” the 74-year-old says, slowly moving the fork and knife back and forth until he saws a piece in two. “I used to cut people open for a living. Now, cutting bread is hard.”

While he admits that it would be easier to stay in bed and watch TV all day, he continues to fight and move forward with his life. Later in the day, his wife will drive him to the San Francisco VA Medical Center where he’ll do more physical therapy.

“I used to go to VA for chemotherapy and for infusions,” he says as he looks up from his self-appointed mission, “but today it’s mostly about rehabilitating myself … trying to get more function in my left hand and left arm and trying to become more coordinated in my activities.”

Four years ago, Russell was suffering from pain in his lower pelvis. It had become unbearable, and when he couldn’t tough it out anymore, he sought medical attention. When Russell, the former head of the American College of Surgeons, found out it was multiple myeloma, he set out to get the best care possible. That meant reaching out to his colleague and friend Dr. Robert Owen at the San Francisco VAMC.

They were residents together at the Fort Miley Veterans Administration Hospital after graduating from medical school in the ’60s, and both served during the Vietnam War under the doctor draft. While Russell went on to private practice after his service, Owen stayed on at VA where he is now the environmental health physician at the San Francisco VAMC.

“Every VA medical center has an environmental health physician who’s in charge of dealing with the registry programs,” Owen said. “When [Thomas] had a diagnosis in late 2010 of multiple myeloma, which has been associated with Agent Orange exposure, he spoke to me and I told him that, by virtue of that, he had an entitlement to come to the VA as a Vietnam Veteran.”

He took the Agent Orange examination and was added to the registry. The cancer of his plasma cells was now linked to his service on the Ticonderoga, and Russell could get all of his care at VA.

“The VA no longer tries to discern specifically how and where one was exposed,” Owen said. “If anyone served at any time in one of the Agent Orange areas, then it’s presumptive that they were exposed. Any of those conditions that have been associated with Agent Orange exposure can be treated without co-payment.”

But why would a career physician who has worked at premier medical facilities in the United States want to get his care at a VA hospital? For Russell, the answer is simple: because he’s a Veteran and the care is on par with the best hospitals that the country has to offer. In fact, he sees VA as leading health care in many respects.

“[VA] care fits with my philosophy of medicine,” Russell says with a smile. “It’s state-of-the-art care, and I say that as a professional, because I’ve been involved [in] taking care of patients in the private sector. I have tremendous regard for the care that you get at VA.”

So, like 9 million other Veterans across the country, he began care with the Veterans Health Administration. He started with chemotherapy and infusion treatments to fight the multiple myeloma, and when he suffered an episode of left-sided weakness that revealed a brain tumor, he continued to get care at the medical center. Now, after brain surgery, a therapist works with him for an hour a week and monitors his progress.

Thomas Russell grimaces with every exercise and movement, but he doesn’t stop.

“Can you do two more?” his physical therapist asks as she holds his left arm up in the air.

“Yeah,” he says as he grits his teeth.

She guides his frail arm down across his chest and then back up again. “Good job,” she says with a smile. He nods.

When it’s time to leave, he thanks all the employees in the room and walks out slowly with the help of his wife and the walker. He’s tired and a little winded, but he’s still self-aware and introspective. He talks about how his transition from doctor to patient has been a painful one, but also an eye-opening experience.

“It’s not easy to be a patient, and I think that, in some respects, I kind of wish I had been a patient before I became the physician,” he says. “I would have been more sensitive to the needs and the responsibilities of being a physician.”

That afternoon, sitting in a chair that overlooks part of San Francisco, he starts to talk about his fellow Veterans who might not think to get their care at VA. Even when he is at his weakest, the doctor and Veteran can’t help but think of others’ care.

“It’s not charity, you know,” he says. “This is because you served your time, and you did something for the country … you’re entitled to it.”

He says he knows VA isn’t perfect, but then what health care system is? He wonders out loud what it might have been like if he stayed on with VA as a physician, and admits openly that the way the system works now is far better than when he was a resident.

It bothers him a bit that VA “gets such a bad rap in the news,” even though it has helped him so much, but he understands that the good stories don’t always make the front page. He just hopes it doesn’t keep other Veterans from looking to VA for care.

“You know, I would say anybody that’s been in the military and has been discharged should definitely look to the VA as a benefit, because the care is superb, in my opinion,” he concludes. “You’ll find VA to a be a very nurturing and very attentive healthcare provider, as good as I think you’ll find anywhere. I wouldn’t go anywhere else for my care.”