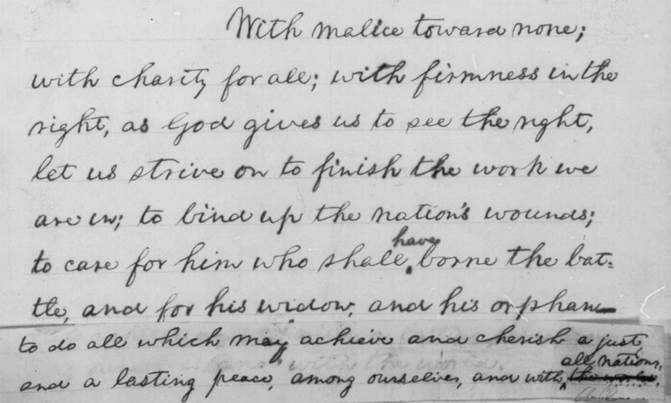 One hundred and fifty years ago, on April 14, 1865, just a few days after Confederate General Robert E. Lee surrendered to General Ulysses S. Grant at Appomattox, President Abraham Lincoln was in the midst of another grueling day. Since the surrender, much needed to be done to finish the war and bring the nation together again. That morning he met with his cabinet and General Grant to discuss what to do about Confederate President Jefferson Davis and other Southern leaders.

Lincoln later joined his wife for lunch and they rode out to the Navy Yard to see three monitor ships that were damaged in the Fort Fisher engagement. He returned that afternoon to more meetings, had dinner with Illinois Governor Oglesby, and met afterwards with several others on congressional matters before leaving for Ford’s Theatre a little after 8 p.m. He and Mrs. Lincoln, accompanied by Clara Harris and Major Henry R. Rathbone, entered Ford’s Theatre to see the performance Our American Cousin around 8:30 p.m. At about 10:13 p.m. actor John Wilkes Booth shot President Lincoln and fled.

By morning, President Lincoln was dead.

Among the things Abraham Lincoln is most remembered for is the Emancipation Proclamation and freeing enslaved people during the war. His legacy, however, permeates many facets of American life and includes authorizing important new Veterans’ benefits that remain with us today. Disability and survivors’ pensions and other benefits were extended to those Veterans who served in volunteer forces, not just regular forces, for the first time. African-Americans were authorized for enlistment with U.S. forces and consequently became eligible for federal veterans benefits for the first time in history. The first national cemeteries were created and their legacy carries on today through the National Cemetery Administration. The first government-provided prosthetics were authorized. The first federal medical and long-term care facility was established specifically for disabled men who served in the volunteer forces—the National Home for Disabled Volunteer Soldiers was authorized. The first Veterans preference in hiring law was enacted.

These new benefits were unprecedented and authorized only for Veterans of the U.S. forces at the time. Although they were not enacted as part of one unified bill, collectively they were the first “G.I. Bill,” of sorts, for those who fought in the Civil War.

Today’s Veterans Health Administration traces its roots back to within day of Lincoln’s assassination. The first meeting of incorporators for the new National Home, which was approved by President Lincoln on March 3, 1865, was scheduled for April 18, 1865. Lincoln’s death was a shock to the nation, whether friend or foe. Many of the members of the founding board for the National Home were friends, so the meeting was postponed and action on creating the institution was delayed.

In September 1887, the Grand Army of the Republic and the citizens of St. Louis, Missouri, donated a beautiful stained glass window depicting Lincoln holding a document inscribed with President Andrew Jackson’s words, “The Union must and shall be preserved” to the National Home for Disabled Volunteer Soldiers. It was placed at the Western Branch of the National Home, located in Leavenworth, Kansas, where it remains today.

In addition to Lincoln greatly expanding federal Veterans benefits as never before, a few words spoken by Lincoln during his second inaugural address on March 4, 1865, uttered just five weeks before his death, were adopted by VA as its motto nearly 100 years later in 1959. That spring, VA Administrator Sumner Whittier had two bronze plaques inscribed with the words “to care for him who shall have borne the battle and for his widow and his orphan,” taken from the last paragraph of Lincoln’s speech, mounted to the front of the Veterans Administration building in Washington, D.C. During the time, women were not permitted to enlist in the military, although numerous women disguised themselves as men and did serve. Women soldiers were unimaginable in 1865 when Lincoln spoke those words. Today, women serve in wide-ranging capacities in all military branches and comprise nearly 15 percent of America’s enlisted military forces. As a result, Lincoln’s quote is now often paraphrased, to reflect the realities of modern society and the expanding roles of women and VA strives to care for all of those who “have born the battle.”