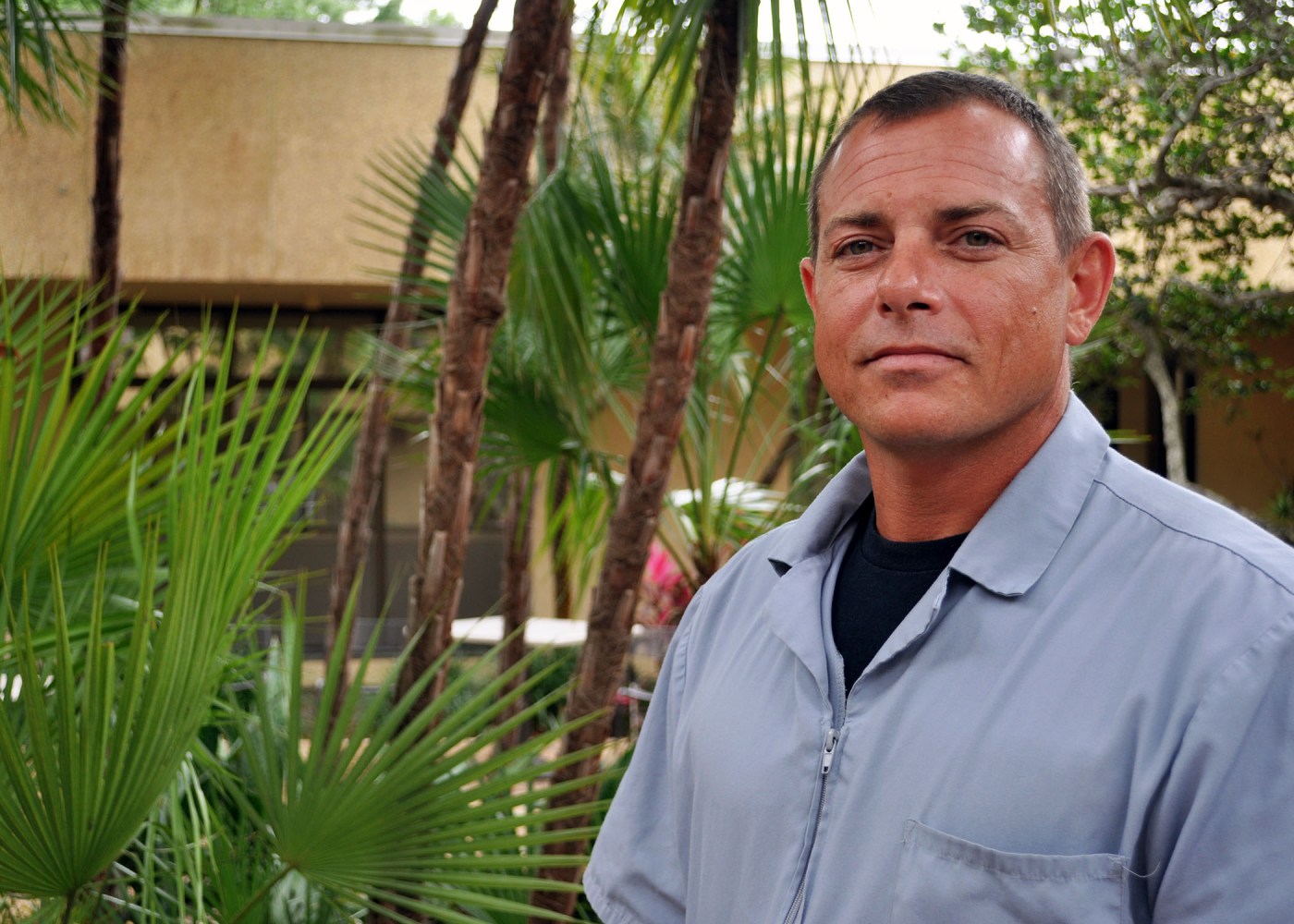 U.S. Air Force Veteran John Sieber, one of about 380 Veterans who attended the Bay Pines VA Healthcare System’s annual Stand Down for Homeless Veterans event, is pictured outside the domiciliary at the C.W. Bill Young VA Medical Center in April. Sieber, a current resident in the healthcare system’s Residential Rehabilitation Treatment Program, benefited from attending the Stand Down Court – a featured activity conducted as part of the event that provided Veterans an opportunity address outstanding legal issues with the 6th Judicial Circuit Court.

In the early morning hours, hundreds of Veterans trickled into a large courtyard located on the west side of C.W. Bill Young VA Medical Center campus. One by one, each Veteran was greeted with a smile and a handshake by volunteers manning registration tables for the Bay Pines VA Healthcare System’s Stand Down for Homeless Veterans – an event held each year to assist homeless Veterans and those at risk by connecting them with VA and community resources.

John Sieber, a formerly homeless 43 year-old Air Force Veteran and recent graduate of the Bay Pines VA’s Substance Abuse Treatment Residential Program, was one of about 380 Veterans served by VA and community partners that April day. Being fully engaged in the Bay Pines VA’s Residential Rehabilitation Treatment Program, Seiber did not attend the event for VA services, food, a haircut or a hot shower. He was there to take advantage of one of the day’s featured activities – the Stand Down Court.

Conducted through a partnership between the Bay Pines VA, 6th Judicial Circuit Court, Pinellas County Clerk of Courts, the county public defender’s office, the assistant state attorney and others, the Stand Down Court was just that – a small, makeshift court established at the event to allow Veterans to address outstanding legal issues.  The court was first offered in 2014 and served 60 Veterans. This year the court was able to assist 70 veterans with fines and costs, and rescinded 18 warrants.

For many homeless Veterans, their living arrangements and unemployment status are supported by outstanding legal issues and fines that they are unable to pay in a system they find overwhelming. For many, the Stand Down Court has been their only hope for legal guidance and reprieve in order to search for employment without fear of failing a background check, and to obtain documents, such as a driver’s license.

Sieber stood in line waiting to address a misdemeanor warrant from 2010, he was noticeably nervous and ground his teeth as he approached a legal assistant to begin a background check and to check the status of the active warrant.

He, like many homeless Veterans, was “scared to ask for help or apply for a job” fearing that his misdemeanor warrant would be identified and he would be arrested. This fear kept him from entering substance abuse treatment for nearly five years and encouraged his geographic relocation to North Dakota, Montana, and then Tennessee, which separated him from his family.

Sieber was silent as he was escorted to a small room located in one of the medical center’s administrative buildings. He was then quickly directed to the court’s holding area known as the “on deck circle” where he met with the bailiff, and then to the makeshift chamber of the Honorable Judge Henry Andringa of the 6th Judicial Circuit Court.

Andringa questioned him about the history of his warrant and his current interaction with the Bay Pines VA.  Naturally, Sieber became tense as he truthfully explained his past relationship with drugs, and how this led to his legal history. His voice seemingly became proud and confident as he then shared his success with residential treatment through VA and his progress to find permanent housing and employment. Then, for Sieber, the impossible happened.

“He (Andringa) totally dismissed my warrant and fines,” Sieber said.  “I can get a driver’s license. I can fill out a job application without fear.  I can get gainful employment, and most importantly eventually see my kids regularly.”

According to Patrick Diggs, Veterans Justice Outreach Coordinator, Bay Pines VA, this case is an example of what Homeless Stand Down Court aspires to accomplish.

“Homeless Veterans and those at risk is a very vulnerable population,” said Diggs. “Many times, these men and woman have physical or mental health issues that form the foundation of their legal problems.”

“By working together with local courts, we can connect Veterans with resources to help them combat the problems at the root of their legal troubles, such as behavioral health, substance abuse, or other reintegration issues,” he said.

Diggs said the court will continue to be a mainstay at the Bay Pines VA’s annual Stand Down for Homeless Veterans event to support the legal needs of Veterans residing in Pinellas County.

This blog was written by Lindsey Sides. Lindsey Sides, LCSW, is a social worker at the Bay Pines Healthcare VA Healthcare System Domiciliary Residential Rehabilitation Treatment Program where she provides intensive case management to homeless Veterans. Ms. Sides served in the United States Marine Corps from 2005-2008 as a combat correspondent, and worked on the National Veterans Summer Sports Clinic public affairs team with the San Diego Veterans Health Administration upon her discharge. In 2011, she graduated from the University of Southern California earning her Masters in Social Work. Ms. Sides worked as an outpatient substance abuse counselor at Lasting Recovery in San Diego before relocating to Bay Pines, FL.