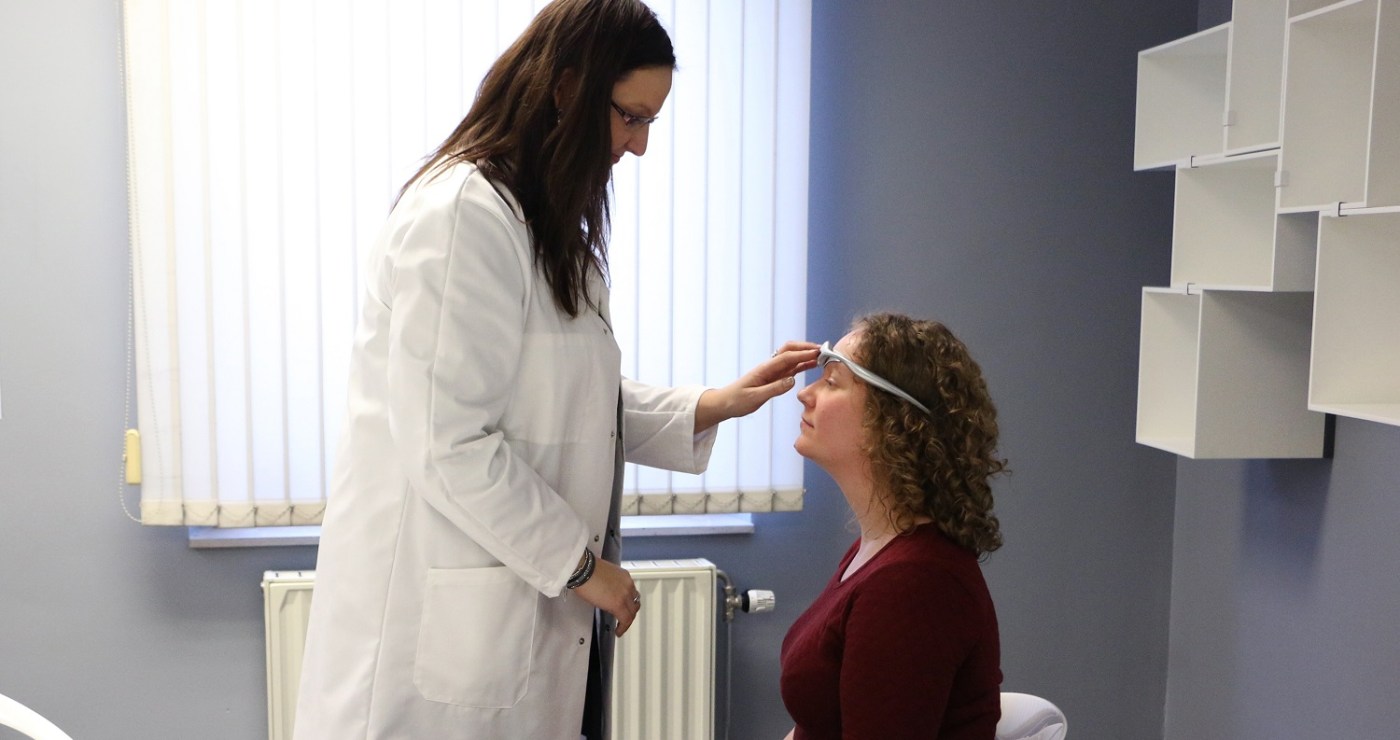 We’ve all experienced a really bad headache at some point in our lives.  But what if you were having a real head-splitter three or four times a week?

The good folks at the Salisbury VA in North Carolina might have discovered a cure for all that pain.

Oh What a Relief It Is

“One of my patients told me about this new device that was approved by the FDA in 2014,” said Dr. Alton Bryant, a neurologist at Salisbury.  “I’ve been prescribing it for about six months now.  I think it’s a solid treatment, certainly as good as our standard migraine medicines.”

So what the heck is it, anyway, and how does it work?

“It’s a futuristic-looking device that you place on your head, like a metallic headband,”   Bryant explained. “It sends electrical impulses back into your brainstem, where they interrupt your pain circuits.  You need to wear it every day for at least 20 minutes.  You can wear it more than that, if you want, but 20 minutes is the minimum. “

He added:  “Using electrical impulses to control pain is called neuromodulation and it’s a big focus in medicine right now.”

The mysterious device goes by the name of Cefaly –pronounced Sef-a-lee— and looks like it was beamed down from the Starship Enterprise.

“I call it my ‘Geordi device,’ because that’s what it looks like,” said Marine Corps Veteran Rodney Harrington. (Lt. Commander Geordi La Forge, blind since birth, was the chief engineering officer on the USS Enterprise. He wore a special visor that enabled him to ‘see.’)

“I was kind of skeptical, but I gave it a try,” Harrington said.  “I went from having two to four migraines a week to having maybe two per month.  It really works.  I usually wear it in the afternoon or evening.  It’s very calming.  It’s kind of a good way to end the day.”

“I’ve had migraines for 20 years, and this is the first thing that’s really made a difference for me.”

Harrington, 44, said his Geordi device is a welcome alternative to the various pills he was taking daily to control his pain.

“The meds I was taking would make me feel like a zombie,” he said. “I call them knock-out pills.  But this thing just relaxes me.  And it’s small and lightweight, so whenever I go out of town I just throw it in my bag and take it with me.

“I haven’t taken my meds in quite some time now,” he added, “so this has definitely been a benefit.  I’ve had migraine problems for 20 years and this is the first thing that’s really made a difference for me.”

“It’s a preventative,” observed Dr. Alton Bryant.  “And like any migraine preventative it will work extremely well for some people, moderately well for others, and not well at all for some.  I can say it’s been beneficial for most of my patients.  Well over half my patients have a moderate to very good response.”

Only half?  So why doesn’t it work for everyone?

Bryant said migraines are the single biggest reason people visit a neurologist.  “More people see a neurologist for migraines than dementia, stroke, or Parkinson’s,” he said. “We’re fortunate to have Cefaly as an optional treatment, because here at VA we’re trying to avoid prescribing meds whenever possible.

“You always have to worry about your patients not taking their meds correctly,” the neurologist continued, “so we’re always open to trying alternatives like Cefaly. Because even when your patients take their meds correctly, there’s always side effects or interactions with other meds they’re taking.  Side effects can add up.  But when you use electrical impulses to prevent pain, you don’t have to worry about any of that.”

Army Veteran Brenda McClennaham gets acquainted with neuromodulation with a little help from Dr. Alton Bryant, a neurologist at the Salisbury VA in North Carolina.

“I was taking a lot of over-the-counter pain killers,” said another of Bryant’s patients, 53-year-old Randy Stegall.  “And some of the prescription meds I was taking made me feel funny.  I won’t say this new device is a cure-all, but it’s given me a lot of relief.  You have to get used to the sensation, though.  It kind of puts you in a very relaxed state.  It’s almost like meditating.  You might not want to drive a car or operate heavy machinery right after using it.”

Stegall, an Army Veteran, said the Cefaly device has only one notable drawback.

“When you first see it, you have to refrain from making a comical remark about it,” he laughed. “It’s definitely different-looking.  When I put it on, I just tell people I’m going to take a few minutes to shock my brain and I’ll be right back.”

Different looking though it might be, but Cefaly appears to have had a distinct impact on the quality of Stegall’s life.

“It’s reduced the amount of meds I’m taking,” he said. “When you’ve had a headache for 14 days, you’re willing to try anything to get relief, and this thing works.  If you’re having issues with headaches, it’s worth a try.  It’s a comfort, having it here, knowing I can use it whenever I need it.”

Six on the Richter Scale

“Initially, in the doctor’s office, it felt kind of funny,” said 49-year-old Army Veteran Mark Brooks. “I didn’t think I would like it.  But I wanted to give it a fair shot.   So I took it home and kept using it. My migraines are real severe, but when I started using it consistently I stopped getting the severe ones as much.

Brooks said his pain never really goes away, which is why he’s on three different medications in addition to his daily Cefaly treatment.  He said he hopes the science of neuromodulation continues to advance so that perhaps one day he can be pain free.

“When I first started getting migraines, back in the 90s, I felt there was no way I could live with it,” he said. “The pain was so severe.  I felt like maybe I had a tumor or something and that I was going to die.  But now I feel like there’s more hope for me.”