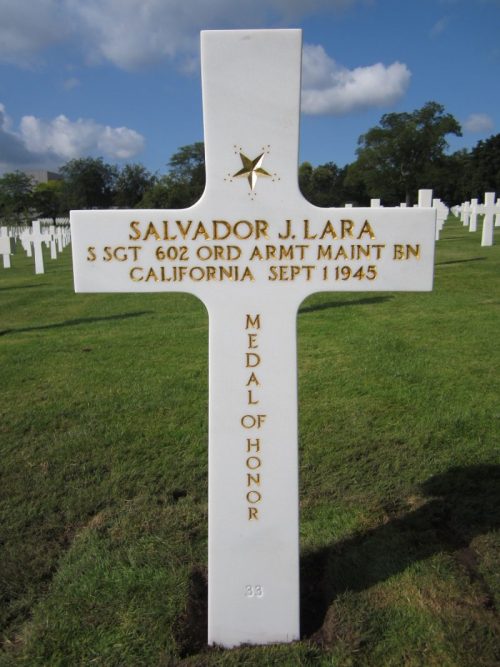 NCA cemeteries enshrine the legacy of all Americans, but for National Hispanic Heritage Month, we have another guest writer.

Please allow me to introduce Greta Hamilton, assistant director at Riverside National Cemetery. Greta has a unique perspective on Veterans Legacy. She shares that with us, while giving us some important history about Hispanic-American veterans. Many Hispanic-American veterans have only recently been fully recognized for their valor. Greta will tell us about the process the brought recognition to so many veterans. And, she will share what it means to the community at Riverside National Cemetery.

National Cemetery Administration (NCA) cemetery directors have one of the best jobs in VA. We get to experience and witness significant events from a front row seat, on a daily basis. Some of the events receive a large amount of media attention and others go barely noticed by the public, but are no less important. A few months ago I attended my first Killed in Action (KIA) burial. Riverside has the dubious distinction of interring the most service members killed in action within NCA. I prayed this would be our last.

I read the casualty report and remember being moved by the deeds of this young Army staff sergeant. He put his troops’ lives before his own and made the ultimate sacrifice. As I stood with the family at the grave site, I was privy to anecdotes about an amazing son, brother, uncle, nephew and leader. He lived as he had died, putting others before himself. I was honored to have been given such insight into the life of this solider. He became more than the name on burial records. I considered myself lucky to witness this poignant event that had become far too often a part of the Riverside National Cemetery historical narrative.

I love History, especially military history. I remember taking a History class some years ago, and the professor challenging us to take a different approach to historical events. He advised us to “look at who is missing from the historical narrative: ask yourself why they are missing; you will be amazed at where it leads and what it reveals.” On March 18, 2014, I was reminded of this advice when President Barack Obama awarded 24 military members our nation’s highest military honor: The Medal of Honor. These 24 service members were the perfect example of how my professor was teaching us how to view the world and conduct historical research. The event aptly illustrated how leaving a group out of the historical narrative changes the dynamic and presents a skewed picture of events.

During WWII, the Korean War and Vietnam War, a group of deserving servicemen were overlooked for the Medal of Honor. With the support of special interest groups, Congress passed the National Defense Authorization Act of 2002. This legislation directed a review of Jewish-American and Hispanic-American veterans’ war records from these three war periods to find soldiers whose acts of valor warranted the Medal of Honor, but may have been passed over because of their race or ethnicity.

Only a private first class at the time of his heroic deeds, Lara was recognized for his valiant actions in Aprilia, Italy in May 1944. During the fight on May 27, “he aggressively led his rifle squad in taking out multiple enemy strongholds and inflicting a large number of casualties on the enemy. The next morning as his company resumed the attack; Staff Sgt. Lara sustained a severe leg wound, but did not stop to receive first aid. He continued until the fight was won.”

Unfortunately, there would be no Hollywood ending for Lara; he died on September 1, 1945, shortly after World War II ended, while serving with the 602nd Ordinance Armament Maintenance Battalion in Europe. He was buried at the Lorraine American Cemetery and Memorial in Saint-Avold, France, a U.S. cemetery managed by the American Battle Monuments Commission.

I marvel at why minority soldiers of this period fought so hard and died for America. The Casa Blanca that he most likely knew was, like the South of the time, divided along racial lines. He fought for a country that did not afford him the rights of a full citizenship, but still, he fought with no regard for his safety. What motivated him to fight so valiantly? It is hard to judge a person’s motivation. I believe the heart of the matter lies in a quote form Cesar Chavez, the Mexican-American Activist and Navy Veteran: “We cannot seek achievement for ourselves and forget about progress and prosperity for our community. Our ambitions must be broad enough to include the aspirations and needs of others, for their sakes and for our own.”

Please join me in honoring the legacy of Staff Sgt. Lara and all Hispanic-Americans who have served this nation.

Greta Hamilton is the assistant cemetery director for the Riverside National Cemetery.