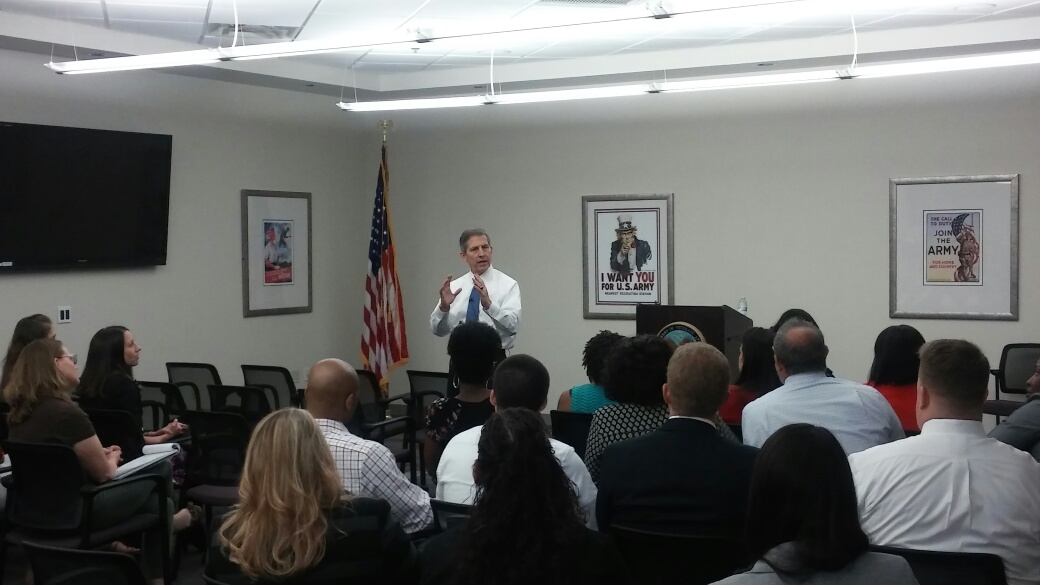 Following a day-long visit Thursday to the Carl T. Hayden Phoenix VA Health Care System, his second in two months, Gibson said “The sustained and continued improvement of the Phoenix VA Health Care System is a department priority. We have the opportunity to take advantage of VA’s scale and scope as the nation’s largest integrated health care system to help Rima and her team in Phoenix. There are best practices and expertise from across the nation that we are bringing to bear in order to deliver more consistent, high-quality care to Veterans. I have great confidence in Rima and her team in Phoenix and have committed to come back every month this year to work directly with them.”

While in Phoenix, Deputy Secretary Gibson met with employees at the Phoenix Regional Office, including those in the National Call Center.

“In my first full week here in Phoenix, I have been meeting with employees and leaders at the facility and I am pleased to hear so many good ideas on how we can improve,” said director of the Phoenix VA Health Care Center Rima Nelson. “Yesterday we had very frank conversations with the entire leadership team about what we need to do to move forward and I’m appreciative of the support we’re receiving. Some of the best and brightest from across VA are coming to Phoenix and that can only mean good things for the Veterans we serve.”

Resources being provided to the Phoenix VA Health Care System include:

We continue our efforts to change the culture at the Phoenix VA Health Care System.

We are bringing best practices and training from across VA’s integrated health system to Phoenix. Taking advantage of VA’s scope and scale, we can bring needed expertise and talent to Phoenix to provide better training which lead to more consistent and more timely care for Veterans.

We are increasing the capacity of the Phoenix VA Health Care System to provide more access to care for Phoenix-area Veterans.

This news release was submitted by the Phoenix VA Health Care System.