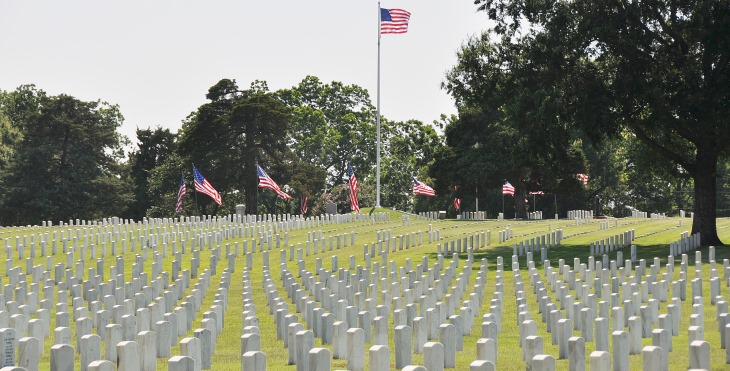 Every year, the Veterans of Foreign Wars hosts a national essay contest for high school students which “encourages young minds to examine America’s history, along with their own experiences in modern American society.” This year’s Patriot’s Pen essay contest asked students to write about “the America I believe in.”

For eighth grader Kinley Wilson, the sounds of rifle volleys from VA’s Fort Gibson National Cemetery inspired an essay on the service and sacrifice of America’s Veterans. Wilson’s family lives near Fort Gibson. “When I hear the rifle volleys echoing from the National Cemetery, I think of the heroes who served for duty, honor and country,” he wrote.

Wilson received the 5th place overall award in the essay contest after winning the state contest in Oklahoma this past January.

Below is Wilson’s full essay, republished with permission.

Two hundred forty years ago our country declared its independence. Our forefathers built this nation on the principles that all men are created equal and that each citizen should enjoy the unalienable rights of life, liberty, and the pursuit of happiness. From the Battle of Lexington to Operation Iraqi Freedom, men and women have been willing to sacrifice their lives to protect and defend these rights. These men and women are true American heroes. The America I believe in honors these heroes and respects the rights and privileges we enjoy.

Nearly every day gunfire rings out near my house. Typically, these sounds would cause people to be afraid, but not in my neighborhood. You see, I live a short distance from a National Cemetery. The three rifle volleys are part of the burial ceremony honoring veterans at the cemetery. The three empty bullets from the volley represent what motivates the true American soldier: duty, honor, and country. When I hear the gunfire or see the rows and rows of white headstones, it is a reminder of the sacrifices so many have made for this country. I am thankful and proud that my America remembers and appreciates its fallen patriots.

The America I believe in not only honors it veterans, but also cherishes the privileges and rights our military defends. As Americans we enjoy many amazing freedoms. We have the freedom to speak our minds, to practice the religion we choose, and to vote for our leaders. These rights should be respected and never taken for granted. To demonstrate our appreciation for these freedoms, citizens of the America I believe in honor the American flag, respectfully stand when the National Anthem is played, and proudly recite the Pledge of Allegiance.

I am thankful for the soldiers who are willing to sacrifice their lives to protect America. These brave men and women deserve the praise and recognition they receive. When I hear the rifle volleys echoing from the National Cemetery, I think of the heroes who served for duty, honor, and country. Many paid the ultimate price to protect the freedoms all Americans enjoy. In turn, respectful citizens show genuine gratitude for those freedoms when they truly honor America. That is the America I believe in.