Paralyzed Navy Veteran regains use of arm with implanted system 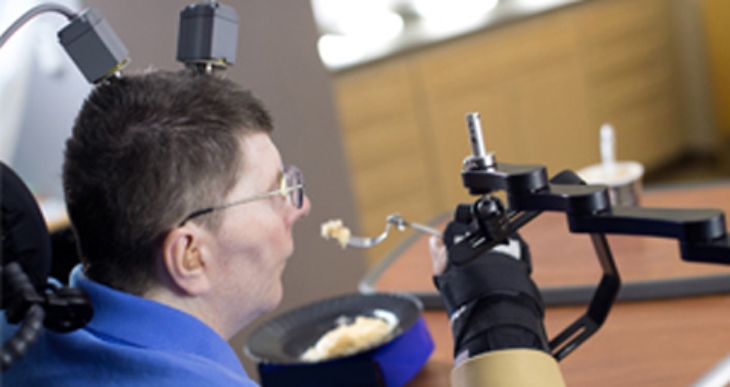 When a person has a spinal cord injury, their spinal cord no longer transmits messages from their brain to their muscles for movement. The messages are still drafted and they hit the “send” button, but the spinal cord injury prevents the messages from reaching the intended target.  This was the case for U.S. Navy Veteran, Bill Kochevar after his bicycle accident in 2006.  He was left completely paralyzed with only the ability to partially shrug his right shoulder.

Now, thanks to Kochevar’s participation in BrainGate2, he can use his right arm to make meaningful movements like scratching his nose, drinking coffee and even feeding himself mashed potatoes. BrainGate2 is a pilot clinical trial being conducted by a consortium of academic, clinical and VA institutions using a brain-computer interface (BCI) and functional electrical stimulation (FES) system to reconnect his brain to paralyzed muscles.

Released March 28, 2017, in The Lancet, this research study is believed to be the first instance in the world of a person with severe and chronic paralysis directly using their own brain activity to move their own arm and hand to perform functional movements.

“For somebody who’s been injured eight years and couldn’t move, being able to move just that little bit is awesome to me,” said Kochevar. “It’s better than I thought it would be.”  Eight years of muscle atrophy required exercising the muscles to increase strength, range of motion and endurance to get the full effect of the combined systems.

Kochevar travels just a short distance down the hall from the Cleveland VA’s Long-Term Spinal Cord Injury Unit to participate in the study. He and the researchers benefit from the close proximity between his VA care facility and the FES Center’s VA research lab.

Other studies have shown persons with paralysis moving wheelchairs, cursors on a computer screen and robotic arms. Some studies have even had persons with significantly less paralysis regain hand grasp assistance, but none have involved such a severely paralyzed person regaining the ability to use his own arm.  The study results suggest that one day, this technology could make its way to becoming the standard of clinical care for persons with chronic and complete paralysis.  The technology could also be applied to other neurological injuries in the future.

BrainGate2 is the combination of the recording and translating capabilities of the brain computer interface (records the pattern of electrical activity and uses mathematical algorithms to decipher the activity into movement commands) and the functional electrical stimulation (FES) system that turns the movement commands into electrical signals that then stimulate the right group of muscles to produce the intended movement.