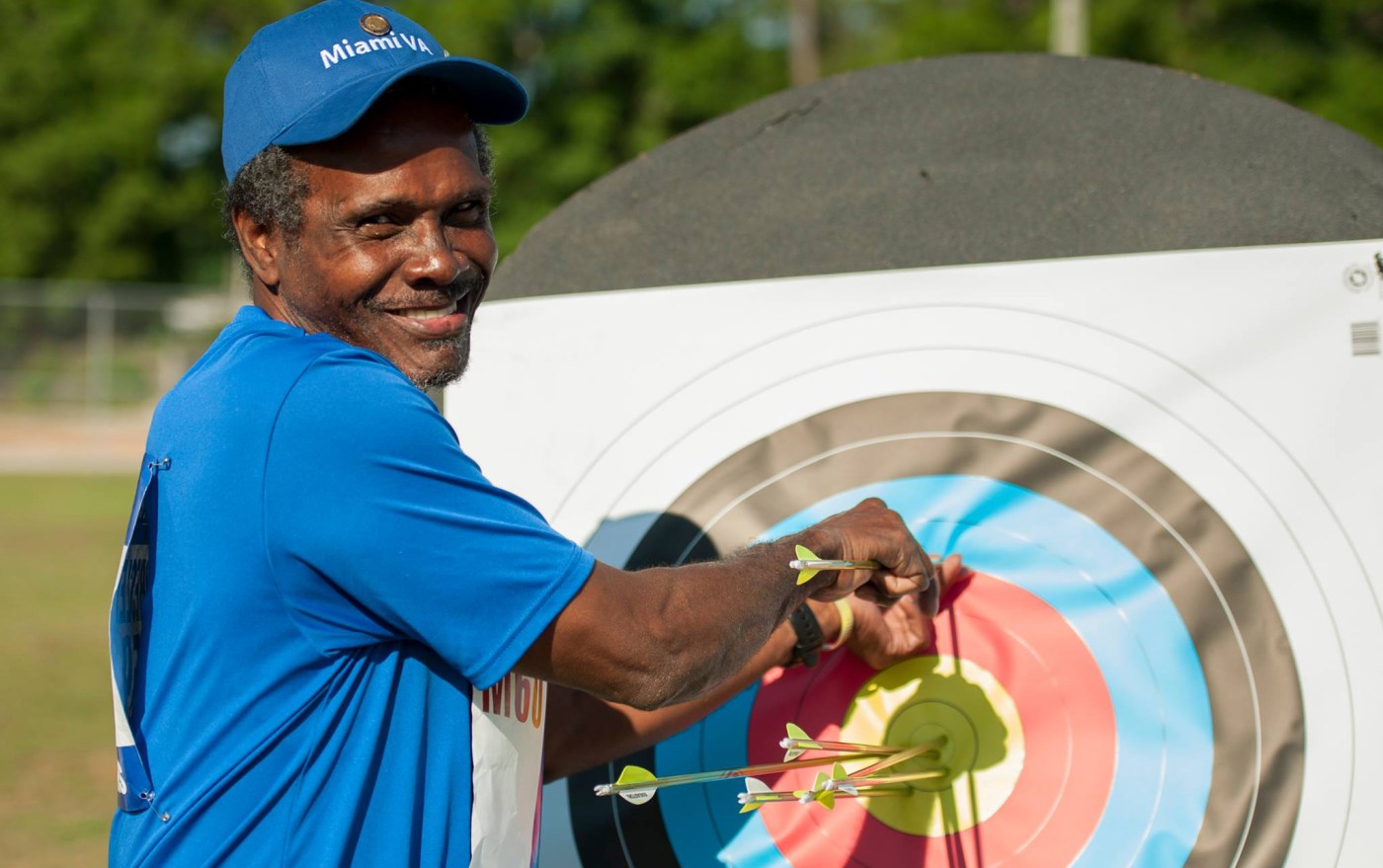 Reginald Presley takes another red and yellow, aluminum arrow, puts it in his bow, pulls back and releases.

Five times in a row, he does it – again and again. Each arrow slices through the air before piercing the colored target more than 30 yards away.

Presley hadn’t picked up a bow, he said, “since at least 1970-something,” but he nailed five out of six bullseyes during the archery exhibition at this year’s National Veterans Golden Age Games in Biloxi, Mississippi. The sixth came close, striking only inches outside the mark.

Presley is a recovering addict, and has been clean from drugs and alcohol for 13 years. He’s endured two hip replacements and says his life is on track thanks to the Miami VA Healthcare System and the Golden Age Games.

He’s come a long way from the Florida outdoors, where he played in the woods with his five brothers and four sisters.

“We used to spend all day out there,” he said. “We’d play cowboys and Indians and other games. I’d make a bow out of a guava tree. They have really strong branches you could bend into a bow, and then we’d take stems from a palmetto branch for an arrow. They were pretty straight and pretty strong.

“I was just always good at it, and hit most things I shot at, even with the rude equipment we used. As we got older, mom bought us stuff as she could.”

Presley, 61, joined the Army in 1975 where he spent three years as a radio teletype operator. He said he drank and used drugs while in the service and continued after his discharge, going from job to job.

“I’m a hard worker and did good work, but I wouldn’t keep a job,” he said. “The longest I was in a job was three and a half years.”

“I knew I had to do what I needed to do. It all starts and ends with me. I guess I was tired of being considered a nobody, or people looking at me like that. I knew I was better than that.”

VA helped get Presley clean, but he had a physical setback in 2013. Arthritis and years of drinking destroyed his hips and he needed two replacement surgeries.

“After the first one I was depressed, and it got even worse after the second one six months later,” he said. “I was thinking I was not going to be able to do what I used to do. That’s where the rec therapists come in and they are wonderful. They inspired me, and were shocked how fast I recovered. Second day, I was up with my walker.

“They were the ones who told me about the sports programs and the Games,” Presley said.

Zuleika Smith, a recreation therapist at the Miami VA, said that’s part of the strategy to help Presley and others get better.

“He’s a little shy, but we knew with him competing and with his sports, that was going to help his overall self-esteem and he can accomplish great things,” Smith said. “We focus on the positive aspect and not looking back at any negativity. We ask, ‘How can we move forward from this day on?’”

Smith said Presley, only in his second year at the Golden Age Games, got really excited when he found out about the archery exhibition. Officials like to audition new games for a couple years to gauge interest and see if it will become a permanent event.

Army Veteran Reginald Presley is all smiles during the archery event at the 2017 National Veterans Golden Age Games in Biloxi, Mississippi. Presley credits the Miami VA Healthcare System and the Games with helping his recovery from drug and alcohol abuse.

But as the Games drew closer, Presley had second thoughts.

“We strongly believe in not saying, ‘Shoulda, woulda, coulda,” she said.

The payoff was watching him shoot.

“He got that first bullseye and I was so excited!” she said. “I was like, ‘Yes! That’s what we came out here to do! That’s what it’s all about!’”

His brother, Xavier, nine months younger, was along for the Games in Detroit last year, and joined Reginald in Biloxi for the first couple of days.

“I had my birthday hanging out with him this week, and couldn’t have asked for a better birthday,” Xavier said. “I have looked up to him my whole life. So when he got clean and sober, we went to meetings together. He’s been there for all of us, so I want to be there for him.”

Xavier said he wasn’t surprised at how well he did, either.

“He’s one of the smartest most humble people I know, but I’ve been telling everybody back in Miami and nobody is surprised. He used to go out with his homemade bow and arrows and shoot rabbits and birds, and that’s what we would eat. You should see him with a slingshot. He can get a bird out of the air while it’s flying.

“That coach he got, I told her, ‘I’m so happy for what you’ve done for him. He doesn’t get upset or depressed. He doesn’t get in that shell where he gets stuck in his room not talking to anybody.”

And just like Smith said, Reginald isn’t looking at the past.

“Everybody has been complimenting me and it just blows me away,” Presley said. “That has touched me so much. I’m hoping they make archery a permanent game because I’m already looking forward to next year, and pricing some bows and arrows so I can keep at it.”

He’s been working at the Miami VA in the Compensated Work Therapy program and has put in two applications for full-time jobs.

“I’m proud of my accomplishments,” he said. “That’s what this program has done for me. It’s given me the drive and the hope.”