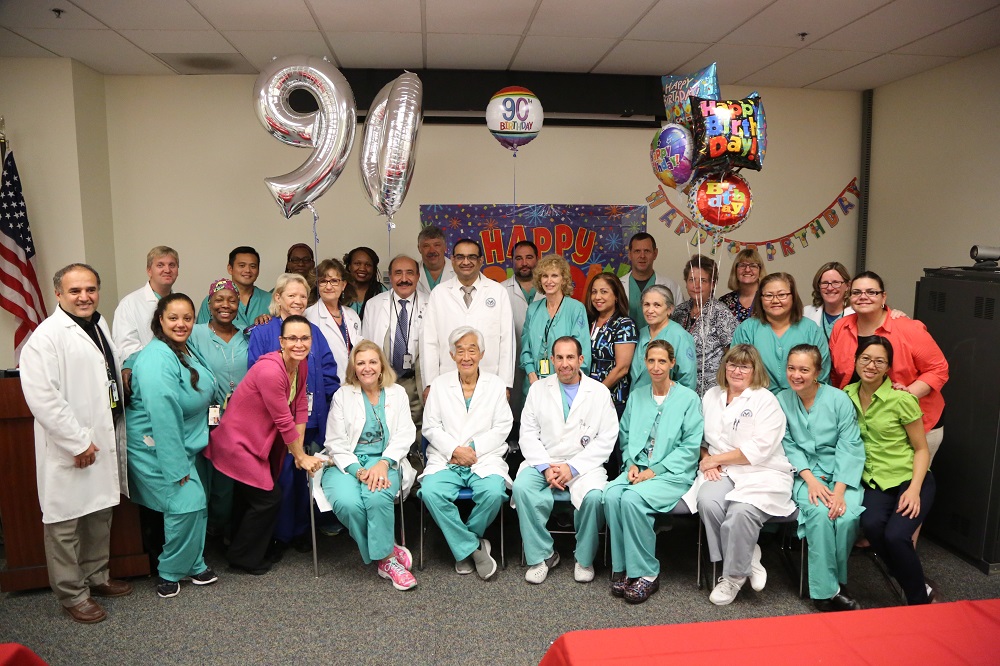 The overhead lights reflect a metallic shine off the top of Dr. Kuang S. Kim’s silver mane as he briskly walks down the hall to the Surgery/Anesthesia clinic. “Is this where you want me to stand?” he asks the photographer with a smile. It’s nearing the end of another busy work day for the physician who consults for the West Palm Beach VA Medical Center’s anesthesia clinic.

Unless you knew him personally, you would never know by his appearance or watching him move about that he had been practicing medicine for nearly seven decades. At 90, this Korean War Veteran and anesthesiologist is the most senior practicing physician in the medical center, if not the entire field of anesthesia.

Medical center staff members celebrated his 90th birthday in the photo above.

Dr. Kim began working at the West Palm Beach VA in 2004 after being retired for nearly three years. He applied at the suggestion of a former colleague he ran into during a visit to the medical center. “To tell you the truth, retiring got kind of boring so I came back to work,” he explained.

“Initially I only planned to stay with VA for maybe one or two years but 13 years later I’m still here. I truly enjoy working with Veterans and the staff here. If I had known more about the VA health care system before I would have come here sooner.”

Born in 1927 in Seoul, Korea, Dr. Kim began his career at the Seoul National University’s medical school. Just a few months shy of his graduation, the Korean War broke out. As a leader of an anti-communist group at his medical school, Dr. Kim felt compelled to join the fight against North Korea. He joined the South Korean army on June 26, 1951 and went on to serve in both Korean and American M.A.S.H units.

A few years after completing his medical degree, Dr. Kim immigrated to the United States. After completing his internship at Good Samaritan hospital in Phoenix, Arizona and his residency at Boston City Hospital, he eventually took a position at St. Michael Hospital in Milwaukee, Wisconsin where he remained for the next four decades.

During his time at St. Michael, he built its anesthesiology department from the ground up and served in various leadership roles. Although he has fond memories of his time in the private sector, he feels his work at VA has been some the most meaningful.

“In the private sector, you have to cut down your time with patients as much as possible to make money for your hospital,” he said. “Here at VA, patients come first and you have more time to get to know the person you are treating. That’s one of the many things I really came to appreciate about working here and why I’ve stayed on staff.”

Although he no longer performs procedures in the operating room, he still conducts patient history and physical examinations prior to procedures and supervises certified registered nurse anesthetists. He also serves as a mentor who over the years has left a lasting impression on his colleagues and hospital leadership.

“He is truly a role model for everyone in the whole medical center on how to treat and approach patients,” said Dr. Ernest Shwaryi, Chief of Surgery Service. “He exhibits the utmost kindness toward colleagues and Veterans. He is one of the most impressive physicians I have ever met.”

Dr. Howard Maisel, Chief of Anesthesia refers to Dr. Kim as his idol – a dedicated, caring and most responsible person he’s ever met. “He is altruistic in the truest sense of the word and always goes the extra 100 miles for his patients,” said Dr. Maisel. “I’ve had the honor of working with him for the past 11 years he is just an absolutely amazing person. I don’t know of anyone who would ever say a bad word about him.”

In a time where most working adults are dreaming of or counting down to retirement, the length of time Dr. Kim practiced as an anesthesiologist is truly fascinating. Although he celebrated his 90th birthday this year, it doesn’t appear he’ll be retiring any time soon.

About the author: Kenita D. Gordon, is a Public Affairs Officer at the West Palm Beach VA Medical Center