Grit and determination allows a Veteran to walk again 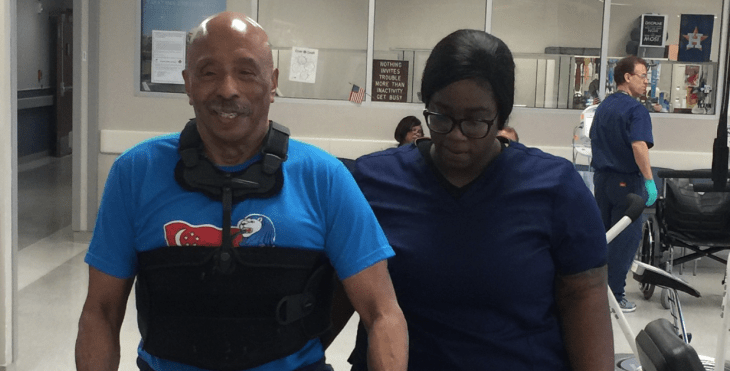 For many years, Air Force Veteran Jose Sotolongo’s, dedication to regular exercise and commitment to good health served him well.   He reached the age of 76 without ever having been in a hospital and enjoyed a life filled with biking, power walking, swimming and even an occasional exercise class.

However, Sotolongo’s life changed dramatically last November when he unexpectedly collapsed on the floor of his kitchen and was unable to walk.  His diagnosis?  Prostate cancer that had spread to his spine and was affecting the nerves to his legs.

“When I got to the Houston VA in November of 2016, I was bedridden and couldn’t move my legs at all,”  Sotolongo said.  “My doctors prescribed chemotherapy and radiation to shrink my cancer, but it was very doubtful that I would ever walk again.”

Despite his grim prognosis, Sotolongo was determined not to give up and his VA doctors were behind him all the way.  They prescribed him physical therapy in addition to his cancer treatments in the hopes that he would gain at least a little of his mobility back.

“As soon as I met Mr. Sotolongo, I could see that he was hyper-motivated and not willing to accept this version of himself,” said Dr. Kirstin Gateno, geriatric physician.  “His determination to walk again was incredible.”

Priding himself on his independence, Sotolongo found his situation very frustrating.  “The VA doctors and nurses had to give me a little tough love to get me going sometimes, but I knew I just couldn’t give up.  Dr. Gateno challenged me to get better and had faith in me.  I couldn’t let her down,” he said.

After months of therapy with Houston VA kinesiotherapist  Laura Lawhon, Sotolongo found himself on his feet in the therapy room, learning to walk again.  He spent countless hours walking around the nursing unit with his walker and recently began drivers’ training.

“Laura is an angel who helped me walk again,” he said.  “I can never thank her and the staff at the VA enough for all they have done for me.  They were all rooting for me and truly inspired me to get better.”

Ironically, Gateno credits Sotolongo with inspiring her and many other Houston VA staff members.  “Mr. Sotolongo’s determination and spirit is amazing.  It has been a true honor to watch him progress well beyond where he thought he could.”

After almost a year as an inpatient, Sotolongo hopes to be discharged by the end of October.  His first order of business after discharge is to walk in to the local YMCA for his regular 5:00 a.m. workout and visit with all his friends. He’s looking forward to taking another spin class in the future.

This article was submitted to VAntage Point by the Michael E. DeBakey VA Medical Center.