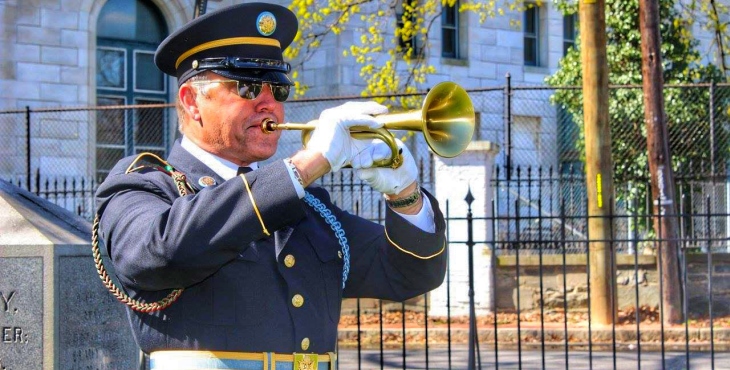 Taps, played on the humble bugle, has been a lasting tribute to America’s fallen service members and Veterans since the Civil War. Trained buglers who can play the somber melody, which was designated as the “National Song of Remembrance” by Congress in 2012, are in short supply requiring America’s final salute to often be played electronically.

Eugene Russell, an Army Veteran and VA photographer, has been sounding Taps for the past 38 years. He put those skills to use recently at Quantico National Cemetery. Russell took time off from work to sound Taps for five funeral services in one day.

“While a live bugler is always preferred, in many cases, members of funeral details do not have musical training,” said Russell, who first played as a high school senior in the marching band at Rio Linda High School in Northern California. “It is the greatest honor that I can give to the men and women of the U.S. Armed Services.”

One of the earliest accounts of Taps being played at a military burial was in Virginia soon after the bugle call’s composition during the Civil War. Union Capt. John Tidball, head of an artillery battery, ordered it played for the burial of a cannoneer, who was killed in action. Not wanting to reveal the battery’s position in the woods to the enemy nearby, Tidball substituted Taps for the traditional three rifle volleys fired over the grave. By 1891, Army infantry regulations required Taps to be played at military funeral ceremonies.

“Every person can recognize the tune within the first three notes,” Russell said. “When you hear the music, it brings you back to the very first time you heard it.”

Russell said that working in the nation’s capital for the VA, helps him keep things in perspective. As a fellow Veteran, he serves other Veterans and their families.

“I am still making a difference,” he said. “I work with other Vets daily here at VA.”

“I carry a coin from the 5th Infantry Division that was given to me by my real-life hero Army Col. Herbert Lloyd, my former battalion commander. The coin is a positive trigger, reminding me of my duty—to serve others. Similar to the oath I took while in uniform, there’s something amazing about standing in a crowd of guys raising your right hand, taking an oath to protect and serve.”

“Each family is different but I believe Taps gives a sense of rest and closure,” Sanders said.

Quantico National Cemetery is located on land that was part of the U.S. Marine Corps training base adjacent to Quantico in Prince William County, Virginia. The land has been used by the military for over 200 years. It was first used around 1775 by the Commonwealth of Virginia for Navy operations, and later, as a blockade point for the Confederate army during the Civil War. In 1977, the Marine Corps donated 725 acres of this land to the VA’s National Cemetery Administration, to establish a facility at Quantico. Since its formal dedication in 1983, the cemetery has hosted more than 1,400 interments for Veterans and their families.