Military, Veterans and advocates selected as special guests at tonight’s State of the Union address 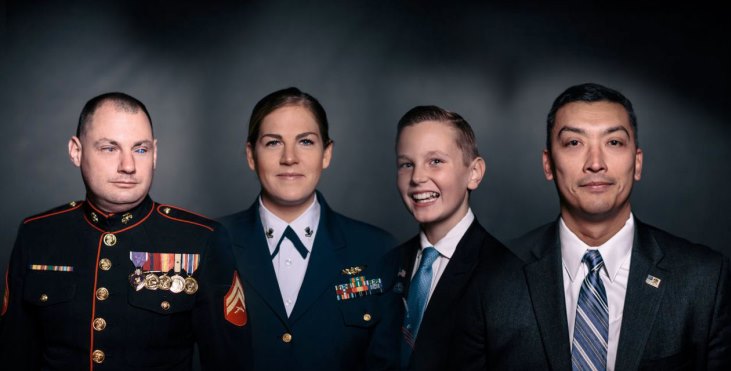 At President Donald Trump’s first State of the Union address tonight in Washington, D.C., service members, Veterans and a young Veteran advocate have been invited to sit in the gallery as guests during the address.

The tradition started back in 1982 when President Ronald Reagan invited Lenny Skutnik to sit with Mrs. Reagan during his speech. Skutnik had gained national attention nearly two weeks earlier when he dove into the icy waters of the Potomac River in the aftermath of the Florida Flight 90 crash to save Priscilla Tirado who had lost her grip on a helicopter life line and slipped back into the water.

Reagan recognized Skutnik’s heroism during the speech, which led to a standing ovation. Since then, every president has invited special guests to sit in the gallery during the remarks

According to the White House, among those joining First Lady Melania Trump in the gallery tonight are:

Retired Cpl. Matthew Bradford: Bradford joined the United States Marine Corps straight out of high school and deployed to Iraq in 2006. In 2007, he stepped on an improvised explosive device (IED). Shrapnel shot into both of his eyes, blinding him and the explosion also took both of his legs. After multiple surgeries and therapy, Matthew reenlisted in the Marine Corps—the first blind, double amputee to do so.

Petty Officer 2nd Class Ashlee Leppert: Leppert has dedicated her life to her country, serving as an aviation electronics technician in the United States Coast Guard. Last year, she rescued dozens of Americans imperiled during the devastating hurricane season. Nothing has left more of a mark on Leppert than her efforts to lift a woman to safety in a helicopter basket. The woman was clutching a few bags of what Ashlee thought were clothes. As she drew the woman near, however, Leppert saw four sets of children’s eyes looking at her as their guardian angel.

Staff Sgt. Justin Peck: Peck has served in the United States Army for eight years. In November 2017, he was part of a team, along with Chief Petty Officer Kenton Stacy, that was conducting a multi-day mission with partner forces in Raqqa, Syria, to clear IEDs from territory previously controlled by ISIS. After the team had located and disarmed seven IEDs, Stacy was clearing the second floor of a hospital building when he was struck by an IED blast and severely wounded. Without hesitation, Peck, who was holding a position outside the building, rushed to Stacy’s location on the IED-ridden second floor. Peck’s actions—including applying a tourniquet, placing an endotracheal tube, and performing artificial respirations and CPR—were directly responsible for saving Stacy’s life.

Celestino “CJ” Martinez: Martinez is a supervisory special agent for the United States Immigration and Customs Enforcement’s Homeland Security Investigations unit. He has spent much of his 15-year tenure working to dismantle transnational criminal organizations, including MS-13. His investigations have led to more than 100 arrests of MS-13 gang members who have been prosecuted for crimes, including homicide, assault, and narcotics and weapons trafficking. Martinez is a proud Veteran, having honorably served our Nation in the United States Air Force and Air National Guard for more than 22 years.

Preston Sharp: Sharp was visiting his Veteran grandfather’s grave in 2015, when he noticed that other local Veterans’ graves were not being honored with American flags or flowers. Today, the 12-year-old has organized the placement of more than 40,000 American flags and red carnations on soldiers’ graves, including VA’s national cemeteries, as part of his goal to honor Veterans in all 50 states.