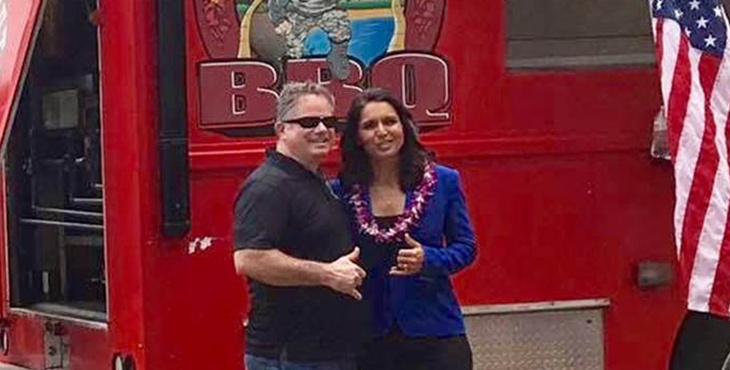 Securing a job is an essential step to exiting homelessness, but for many homeless Veterans employment is not just hard to find. It can be hard to keep.

Veteran Frank Diaz and his Tin Hut BBQ food trucks and catering service are addressing this issue head-on in Diaz’s own backyard on the island of Oahu in Hawaii.

“I like to hire those people who need an opportunity in life to transition,” Diaz said. “Sometimes they come straight from the military; others are homeless Veterans who I try to offer stability to.”

Over the past five years, Diaz has hired 24 Veterans and their spouses to work his food trucks. Four of those Veterans were exiting homelessness. But his dedication to Veterans and their families goes far beyond saying “you’re hired.”  For the Veterans that Diaz has brought on to his team who have experienced homelessness, he has offered shelter, transportation, mentorship and a foundation from which to grow.

Diaz wasn’t always a food truck entrepreneur. His career started in the U.S. Army and eventually brought him to the U.S. Department of Defense as an anti-terrorism specialist. In 2011, Diaz decided he wanted to use his passion for barbecue and his love for Hawaii in his work to serve service members, Veterans and their families, so he launched Tin Hut BBQ. When Diaz retired from government work in 2014, Tin Hut BBQ became his main mission.

Since establishing his business, Diaz has cemented himself in the military community on Oahu. He uses his own military and government experience to inform his catering service on military protocol, event flow and military etiquette. This attention to detail has positioned Tin Hut BBQ as a trusted and popular catering source among both civilians and local military groups.

Tin Hut BBQ has supported school events, church fundraisers, and military events, including retirements. Diaz has also donated food from his business to stand downs in Honolulu and has hosted deployed Service members for Christmas dinner.

The way Diaz runs his business is the very embodiment of the attitude that drives our nation’s military: No man or woman is left behind. When Diaz hires a homeless Veteran, he sees that individual as a Veteran, first and foremost. To Diaz, that means this employee will know the importance of teamwork, understand what it means to be accountable, embody a resilient spirit and work well under pressure. And that makes hiring easy.

But Diaz realizes that the job he offers homeless Veterans will likely be part of their transition. So he goes along on the ride with them, even if that means eventually helping find those Veterans new jobs that are better suited to their situation and goals.

For one formerly homeless Veteran, Diaz went above and beyond.

“I was feeding him, and I was giving him a lot of food, he had a place to stay [at Tin Hut], and I bought him clothes, but he still felt that he had to go dumpster diving for food,” said Diaz. For many Veterans exiting homelessness, a job doesn’t immediately offer a sense of security, so they continue with their usual routines.

“But we got there, with patience,” Diaz said of the Veteran’s transition away from homelessness. “The good thing about this Veteran is that he had skills as an electric engineer from his time in the military, and we were able to get him back into that field. So it was just a transition time. And I was happy to be part of that transition time. That’s one of my favorite success stories.”

In the future, Diaz plans to hire and provide additional support for more Veterans who are homeless and exiting homelessness. He also hopes to take Tin Hut BBQ to other military bases someday.

“I’m a disabled Veteran,” Diaz said, “and because I serve Veterans, it will continue to be an opportunity to hire.”

If your business or organization has employment vacancies to fill, find out how to interview job-ready Veterans who exited homelessness and are ready to add value on day one by visiting www.va.gov/homeless/stakeholders.asp.

Jackie Nguyen is a disabled Army captain, served in the US Army from 1986 to 1992 and was deployed in Kuwait in 1991. She was homeless from 1994 to 2004.  However, in 2007, Jackie earned a master’s degree in psychology. Today, she spends her time giving back and sharing her experience, strength and hope with Veterans experiencing homelessness as a community employment coordinator at the Spark M. Matsunaga VA Medical Center in Honolulu, Hawaii.