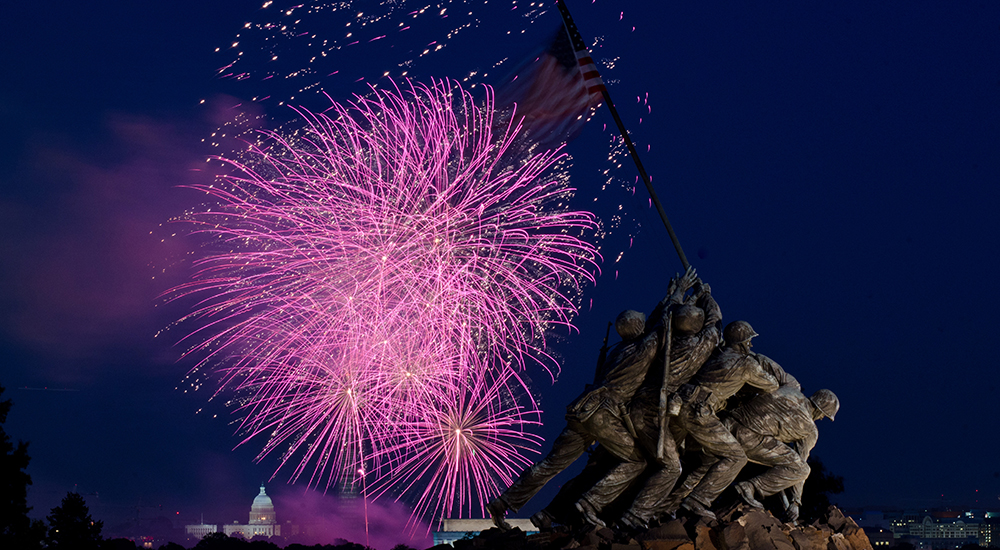 We usually just call it The Fourth but of course it’s officially Independence Day. Congress officially recognized the holiday on June 28, 1870.

Independence has a very special meaning for the thousands of Veterans we serve at VA. The independence we enjoy in America has been safeguarded for 242 years by the millions of men and women in uniform since Valley Forge.

At VA medical centers across America, Veterans salute and are saluted with special occasions to mark the day. Just a few examples:

NASCAR driver Kyle Larson (above) visited Hines VA Hospital in Chicago to meet Veterans and help distribute food at the Hines Food Pantry. Larson is the ambassador for Stars & Stripes Weekend which celebrates and honors all who serve and those who have served. Veterans at Hines also received 50 tickets to the NASCAR Xfinity Series 300 Race at Chicagoland Speedway.

Thunder on the Mountain

For decades, Thunder on the Mountain has been hailed as one of the largest and most extravagant Independence Day traditions in the state of Alabama—and this year will be no exception.  On July 4 Thunder on the Mountain 2018 will once again illuminate the skies above Birmingham’s beloved iron man, Vulcan and will be televised live from the top of the Birmingham VA Medical Center parking garage.

Over 200 Veterans, staff and family members will view the fireworks which will be choreographed to a musical soundtrack patriotic favorites and popular music.

The Bay Pines Community Living Center will have the Alder Gate Strings Band perform as they have for many years. One other unique guest will be a miniature horse.

Thanks, Melanie Thomas and Jenny Campbell.

Artist Yolanda Mozdzen painted a series of five paintings for Veterans celebrating the 4th of July.  Her plan is to donate one painting to a facility relating to Veterans in each of the five boroughs of New York City.  She chose the one called “Home” to bring to VA’s Manhattan Campus.  “I thought ‘Home’ felt right for the hospital because while patients are in the hospital, it is home.  And many Veterans feel  more comfortable and happier in a place where they are with other Veterans than somewhere where people don’t know about them,” she said.

Her 4th of July paintings are dedicated to US Veterans everywhere, from every era.

VA Western NY Healthcare System had a marvelous Flag Day Celebration in partnership with Batavia Middle School. They recently held a large Veterans Stand Down at Key Bank Center to provide resources to all Veterans. Over 100 VA and community providers, employers and resources were on hand to help Veterans.

Veterans and family members attended a special concert by the U.S. Air Force Rock Band at the Jesse Brown VA Medical Center on June 30. There was also an ice cream social, great music and great treats, sponsored by the Voluntary Service Team

The day after Congress voted to declare independence, John Adams wrote to his wife, Abigail:  “It ought to be solemnized with Pomp and Parade, with Games, Sports, Guns, Bells, Bonfires and Illuminations from one End of this Continent to the other from this Time forward forever more.”