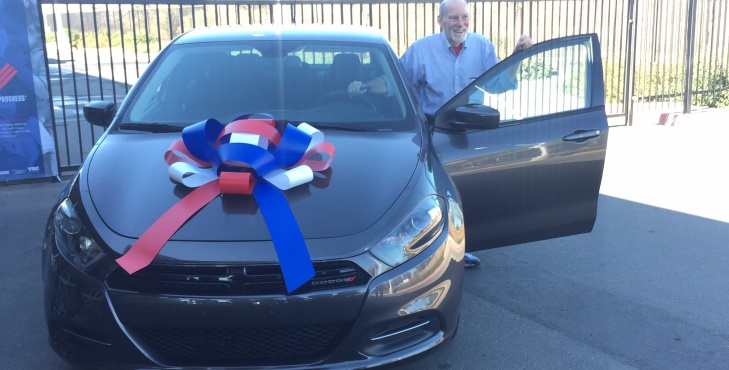 Over the past five years, Progressive’s Keys to Progress® program has donated more than 500 cars to Veterans in need — and those cars have changed lives.

“It was a day I’ll never forget,” said Army Veteran Toby McNutt who received her car on Nov. 9.

During the year before the donation, Toby was teetering on the edge of homelessness, with a car that she couldn’t rely on.

She was living with her dad, working a part-time job, and starting business classes at Washburn University in Topeka, Kansas, when her dad decided to move to Indiana. Toby wanted to stay in Topeka, but she knew she wouldn’t be able to afford housing on her own, so she reached out to VA. Her VA caseworker helped her find an apartment through a supportive housing program run by the departments of Veterans Affairs and Housing and Urban Development — called HUD-VASH.

This solved one problem, but Toby had another: Her car was still unreliable. She said it would break down whenever it was most inconvenient.

“I’d leave work to go to lunch and my car would stop, about two or three times. My old car stopped on me at school,” Toby said. Her VA caseworker got word and told her about Progressive’s Keys to Progress program. Toby didn’t hesitate to apply.

Now, Toby drives her 2016 Chevy Malibu to work and school without fear of it leaving her stranded.

On the other side of the country, on that same November day, Navy Veteran Michael Santos (pictured at top of page) received his Keys to Progress donation in Fresno, California.

For years, Michael had been living with seasonal affective disorder, which caused him to fall behind on rent in the winter. He would always catch up on his payments during the sunnier months, and his landlords were OK with that — until he encountered one that wasn’t. After one winter of missing rent with a new landlord, Michael was evicted. He was homeless.

It wasn’t until about a year later that he found Veterans Plaza, a transitional service, and began his journey out of homelessness. Soon after, Michael was put in touch with a VA caseworker and enrolled in HUD-VASH, which helped him find housing.

With a place to call his own, Michael decided he wanted to pay it forward, so he began volunteering at a number of Veteran-centric organizations. The commitment was rewarding but proved difficult — in part because he didn’t have a car.

“In order to do everything, I was spending 15 hours a week on the bus,” said Michael.

Michael’s VA caseworker heard of this and told him about Progressive’s Keys to Progress program. He quickly applied. It was fortunate timing because two weeks after receiving the car, Michael severely injured his back.

“I wouldn’t have been able to do anything with public transportation,” Michael said. “If I didn’t have this car, I wouldn’t have access to the services I need. It really enables me to live a fuller life.”

Once Michael makes a full recovery from his injury, he plans to set up a group at his local Vet Center, where Veterans can watch movies together and open up afterward about how the films made them feel.

These stories wouldn’t be the same without the hard work of Progressive employees who support the Keys to Progress program, like Veteran Alex Rucshner, senior trainer for claims. Alex works with VA caseworkers and VA partner organizations to identify Veterans who are eligible for Keys to Progress services.

“Lack of transportation holds people down and takes away their freedom — it doesn’t give them a chance to be stable, to hold down a job, to get to their doctors’ appointments, to do everything they need to do,” said Alex. “And we like giving freedom back to the people who fought for ours.”

Toby and Michael received two of the 115 cars that were donated in 2017.

Veterans interested in receiving a 2018 donation must receive the appropriate forms from a non-profit or a VA staff person, as well as meet certain criteria. From there, they can submit the application to the Keys to Progress program themselves or through a family member or lawyer.

Those who receive donations will get a refurbished car, a full tank of gas, car insurance payments made for six months, and other assistance based on where they live. With more than 60 Keys to Progress event locations nationwide, Progressive looks forward to gifting at least 100 more Veterans with vehicles this year to help them move forward in their lives.

Holly Hirsel, a social worker, employed with VA’s national Homeless Program Office where she works with the community engagement team to develop and maintain partnerships with public and private entities to advance the availability of resources to prevent and end homelessness among Veterans. She holds a master’s degree in social work from Case Western Reserve Mandel School of Applied Social Sciences and an undergraduate degree from Cleveland State University majoring in both psychology and social work.