Home / Memorial Affairs, Top Stories / What It’s Like to Live in a National Cemetery: A Look at Cemetery Lodges

What It’s Like to Live in a National Cemetery: A Look at Cemetery Lodges 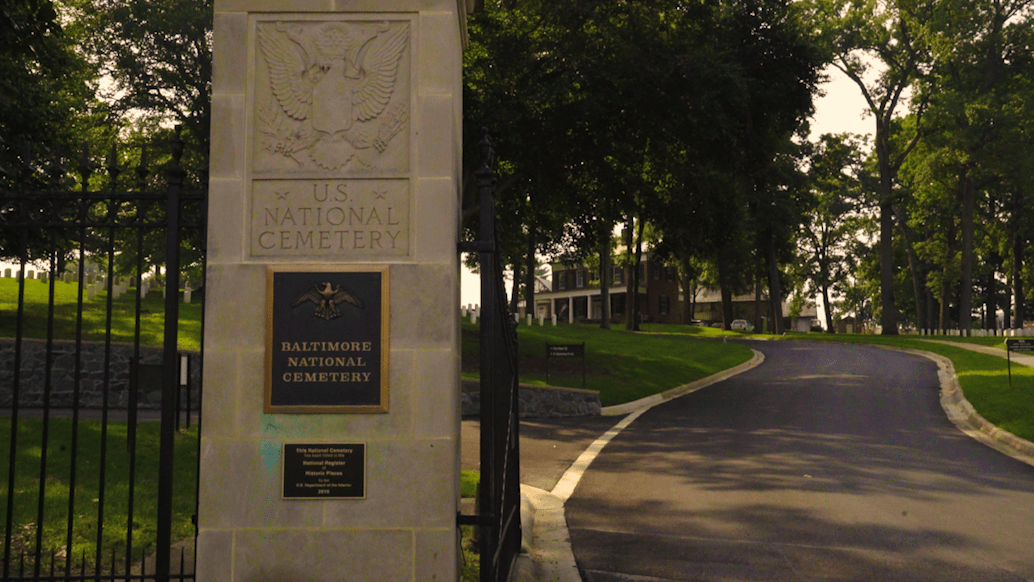 59 of our national cemeteries have lodges on property. In most cases, they are used as administration buildings or by Veteran Service Organizations. In five cases, like Baltimore National Cemetery, the lodge is used as a full time residence for cemetery directors.

A view of Fort Rosecrans National Cemetery from the back porch of the cemetery’s lodge.

One of the best views

Graham Wright has one of the best views in the entire National Cemetery Administration (NCA). When he walks out his front door, he see the history. But it’s the back-door view that is truly breathtaking.

“In front of me are the rolling hills with all of the headstones,” said Wright. “I can see San Diego Harbor to my left and the Pacific Ocean off in the distance. I could look at the ocean all day long.”

Wright, a retired U.S. Navy Veteran and a 2014 graduate of NCA’s year-long Cemetery Director course, is the Assistant Director for Fort Rosecrans and Miramar National Cemeteries in San Diego, California. He, and his family, live in the historic lodge located on Fort Rosecrans.

Wright remembers the national cemetery from when he was stationed in San Diego. “Now I have the best commute in the area,” he says.  “At first, I got mixed reactions from friends and family when I told them we were going to live on the cemetery grounds,” remembered Wright. “People look at you a little strange, then when they visit, they want to live here.”

Lodges date back to the end of the Civil War

Lodges on cemetery grounds date back to immediately after the end of the Civil War when national cemeteries were being built around the country to provide a final resting place of dignity, honor, and respect for the fallen. The initial period of temporary frame lodge construction went from 1867 to 1869 and overlapped with the construction of the first permanent masonry lodges. A one-and-one-half-story, L-plan house with mansard roof in the Second Empire style—was refined over a two-year period before civil engineer Thomas P. Chiffelle drew a definitive version of it in 1871. The first of this style is at Richmond National Cemetery in Virginia. In the 1870s, the army built L-plan lodges with mansard roofs in dozens of national cemeteries. The design was altered in 1885-1895 before being abandoned completely.

From the 1920s through 1940s, lodge construction used typical suburban house forms as well as revival-style and neoclassical designs intended to match the lodges to their local settings. New lodge construction ceased around 1960.  The lodge at Fort Rosecrans National Cemetery was built in 1936 and is significant as the prototype for the Southwestern Ranch style of lodge design.

In another example, the desire to match designs to localities prompted the alteration of the revised L-plan lodge built at San Francisco in 1885 into a Spanish Mission Revival building in 1929.  The survival of the San Francisco lodge is especially significant because it represents the first departure from the L-plan design as the Quartermaster’s office sought to integrate the living quarters of the cemetery superintendents into the trends shaping residential architecture in the twentieth century.

They get pulled by the history

Kathy McCall knows this feeling of living in an historic lodge of a VA national cemetery all too well.  For the past 11 years, she has been the main lodge resident at the San Francisco National Cemetery, also known as the Presidio.  A graduate of the first Cemetery Director class in 2005, she jumped at the chance to live on the cemetery grounds.

“My views are magnificent,” said McCall, who is also the Director of nearby Golden Gate National Cemetery.  “Rows and rows of historic headstones and then off in the distance the spires of the Golden Gate Bridge, the bay, and Alcatraz.”

While appreciating the beautiful panoramas and landscapes, these Cemetery Directors are driven in their mission to serve Veterans, their families, and the public.  Living on the cemetery grounds makes that easier to do.

“We have many visitors,” said McCall.  “They appreciate the beautiful setting and get pulled by the history.”

This story was produced through the cooperative efforts of multiple VA employees. NCA would like to thank Timothy Lawson for the video production and interviews at Baltimore National Cemetery, Jim Theres for his interviews and story of the Fort Rosecrans and San Francisco National Cemeteries, Director Kathy McCall and Assistant Directors Konrad Tolai and Graham Wright for sharing their unique experiences residing in the historic cemetery lodges.