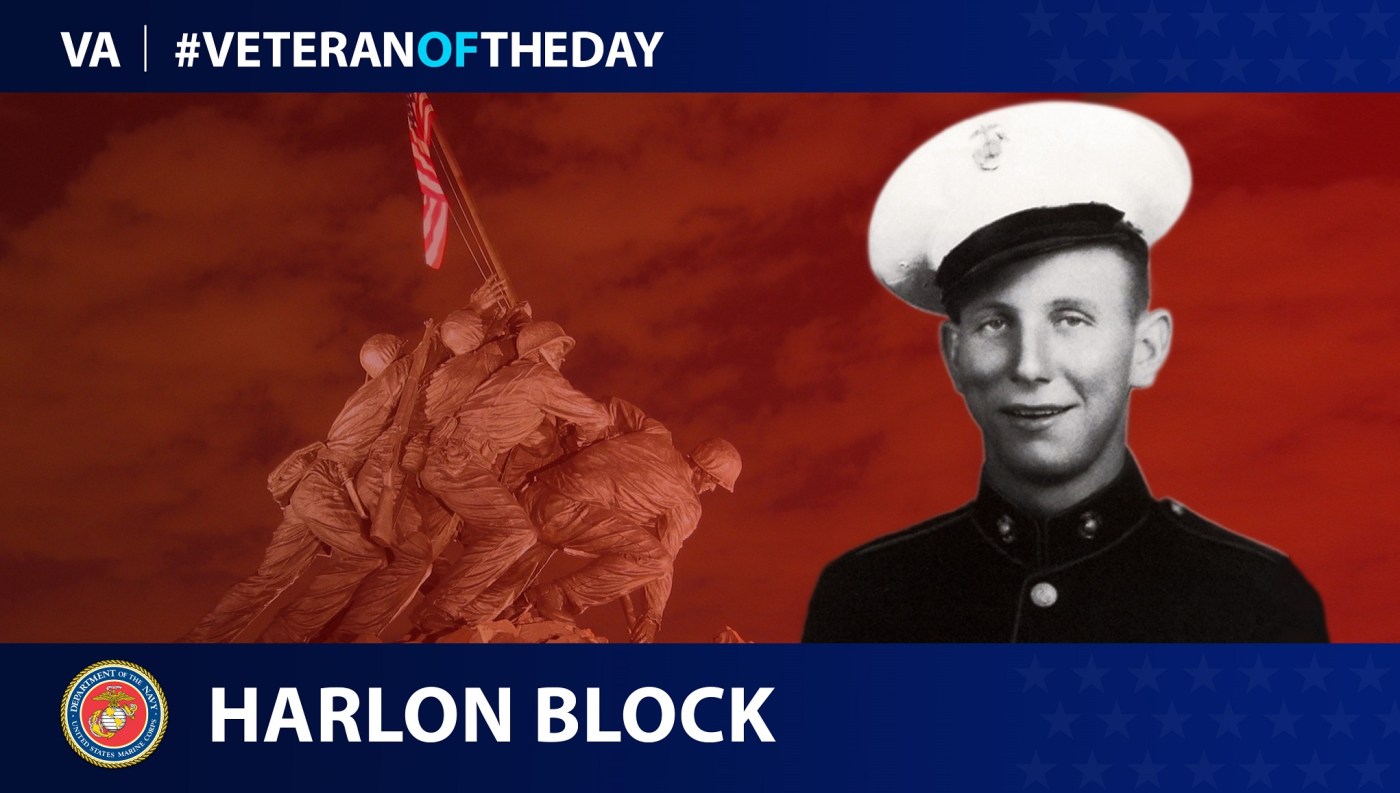 Veteran of the Day graphic created by Alexandria Craig for the U.S. Department of Veterans Affairs.

Harlon H. Block was born on Nov. 6, 1924 in Yorktown, Texas, to Ada Belle Block and Edward Frederick Block, a World War I Veteran and a dairy farmer. Harlon grew up on a 40-acre farm in the Rio Grande Valley with his parents and five other siblings.

Although Harlon was a religious child, he did not escape the teenage rebellion years. He was especially unruly toward one of his principals. After refusing to reveal the name of a school vandal, Harlon was expelled from the private Adventist school he attended. His father then enrolled him into Weslaco High School where he became a star player on the championship football team.

Harlon worked on the farm and in the oil field after graduation. However, he eventually followed in his father’s footsteps. The eighteen-year-old enlisted in the Marines in 1943.

After boot camp in San Diego, he completed Parachute Training School and was quickly promoted to private first class. Three weeks after his nineteenth birthday, Harlon became a rifleman with the 3rd Marine Division in Bougainville and then Guadalcanal islands during the height of World War II.

While visiting his hometown during a 30-day furlough, Harlon made a prophetic message to his friends: “I don’t think I’ll be coming back.”

Harlon’s next duty station was Camp Pendleton, California, with the Company E., 2d Battalion, 28th Marines of the 5th Marine Division. Later that year, he was promoted the rank of corporal. On Feb. 19, 1945, Harlon and his platoon were a part of the invasion of Iwo Jima.

The Battle of Iwo Jima would be his last.

Harlon and his squad stormed onto shore along with thousands of other Marines, Navy Corpsmen and Seabees. After the fourth day of combat, they defeated the Japanese stronghold at Mt. Suribachi. It was there that Harlon and five other Marines were immortalized in the famous Associated Press photo by Joe Rosenthal on Feb. 23, 1945.

A smaller flag was raised earlier that day by Sergeant Henry Hansen, Platoon Sergeant Eugene Thomas, Corpsman John Bradley, Private Philip Ward, Private James Michels and Corporal Chuck Lindberg; however, the heroic image of Harlon and his five comrades raising the larger American flag at Mt. Suribachi is perhaps the most iconic photograph from the war.

Harlon took command of the squad and continued to fight to the northern and western end of the island after his squad leader, Sergeant Blank, was killed in action on March 1. Harlon, too, was killed later that day by mortar fire near the Nishi Bridge.

For his service, Harlon was awarded the following decorations and medals: Purple Heart (posthumously), Presidential Unit Citation with one star (for Iwo Jima), Asiatic-Pacific Campaign Medal with two stars (for the Consolidation of the Northern Solomons and Iwo Jima), American Campaign medal, and the World War II Victory Medal.

Today, Harlon is interred in the Rio Grande Valley adjacent to the Iwo Jima Monument located in Harlingen, Texas.

We honor his service and sacrifice.