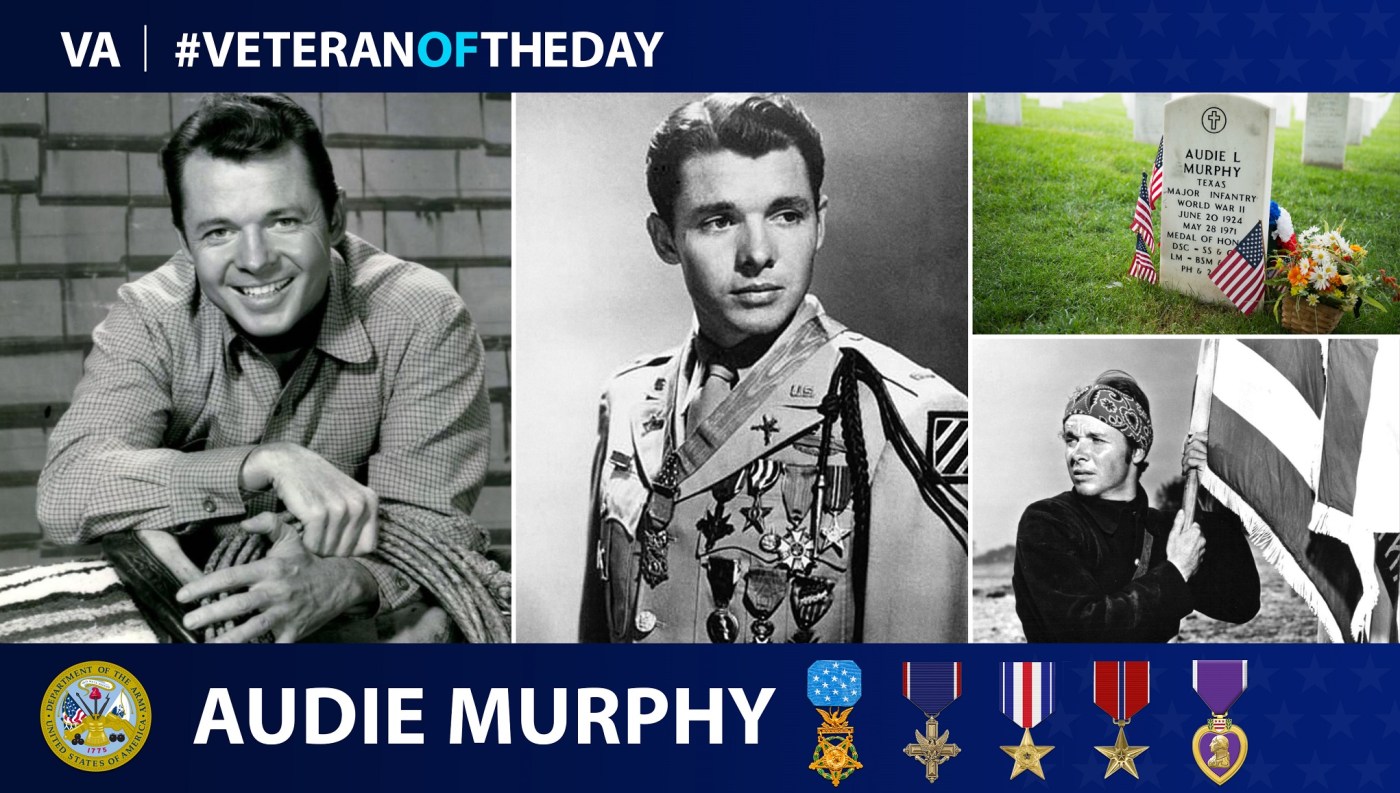 Today’s #VeteranOfTheDay is Army Veteran Audie Murphy. Audie served during World War II. By the end of the war, Audie had become one of the most decorated soldiers in the United States Army, earning every military combat award for valor.

Following the attack on Pearl Harbor, 16-year-old Audie Murphy attempted to enlist with the United States Marine Corps. After being turned down from the Marines for being too short, Audie successfully managed to enlist with the United States Army. He then received basic training at Camp Wolters, Texas and advanced infantry training at Fort Meade, Maryland.

Audie began his combat tour in the Mediterranean theater with B Company, 1st Battalion, 15th Infantry Regiment, 3rd Infantry Division under Major General Lucian Truscott. There, he participated in the assault on Arzew, Algeria, the Allied assaults on Sicily, and the invasions of mainland Italy.

After the Allied victory over Italy, Audie and the 15th Infantry Regiment joined the Allied push through France. On Jan. 26, 1945, near the village of Holtzwihr in eastern France, Audie’s forward positions came under fierce attack by German forces. Against the onslaught of six Panzer tanks and 250 infantrymen, Audie ordered his men to fall back to better their defenses. Alone, he mounted an abandoned burning tank destroyer and, with a single machine gun, contested the enemy’s advance. Wounded in the leg during the heavy fire, Audie remained there for nearly an hour, repelling the attack of German soldiers on three sides and single-handedly killing 50 of them. His courageous performance stalled the German advance and allowed him to lead his men in the counterattack which ultimately drove the enemy from Holtzwihr. For this he was awarded the Medal of Honor.

Following the war, Audie had a 21-year acting career, including his performance in the 1955 autobiographical film, To Hell and Back. Throughout his life, Audie struggled with what is now known as post-traumatic stress disorder, caused by his experiences in Europe. Audie died in 1971 in a plane crash near Catawba, Virginia. He is laid to rest at Arlington National Cemetery.