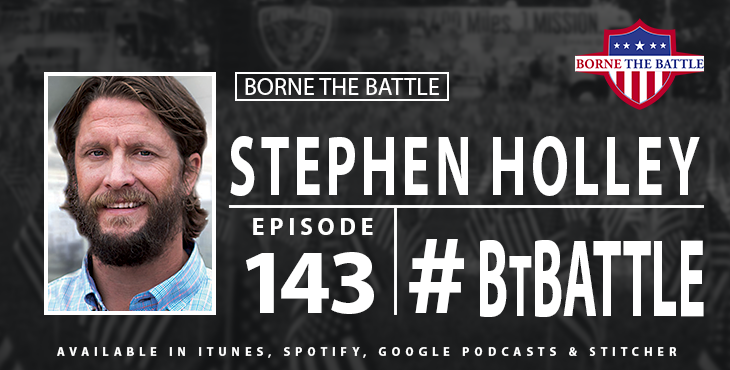 For the next month, the VA’s National Cemetery Administration is partnering with Carry The Load. This week’s guest, Stephen Holley, is the CEO and co-founder of the nonprofit. He’s also a former quarterback at the Naval Academy and a former Navy SEAL.

After graduation, Stephen served as a SEAL officer for five years. During those five years, he deployed four times. His deployments covered COIN operations in both Operation Enduring Freedom and Southeast Asia.

After his service he, and fellow Navy Seal Clint Bruce, founded Carry The Load. The nonprofit started as a means to reinforce the meaning behind Memorial Day. Today, their mission is “to provide active, meaningful ways to honor and celebrate the sacrifices made by our nation’s heroes— military, veterans, first responders and their families.”

They do this is with three programs:

In honor of Memorial Day, from April 25 through May 22, Carry The Load’s three separate relays will travel over 11,000 miles. Each relay will hand out a flag every five miles and will meet each other in Dallas, TX for a Memorial Day march. In support of this mission, 26 VA National Cemeteries in 17 states will serve as rally points. When Carry The Load arrives at each national cemetery rally point, there will be a “Tribute to the Fallen” plaque unveiling and dedication ceremony honoring Veterans and gold star family members.

Additionally, Stephen also talks about his service, his transition, and what Memorial Day means to him.

Additional Links to This Episode:

You can read the entire transcript of this episode here.