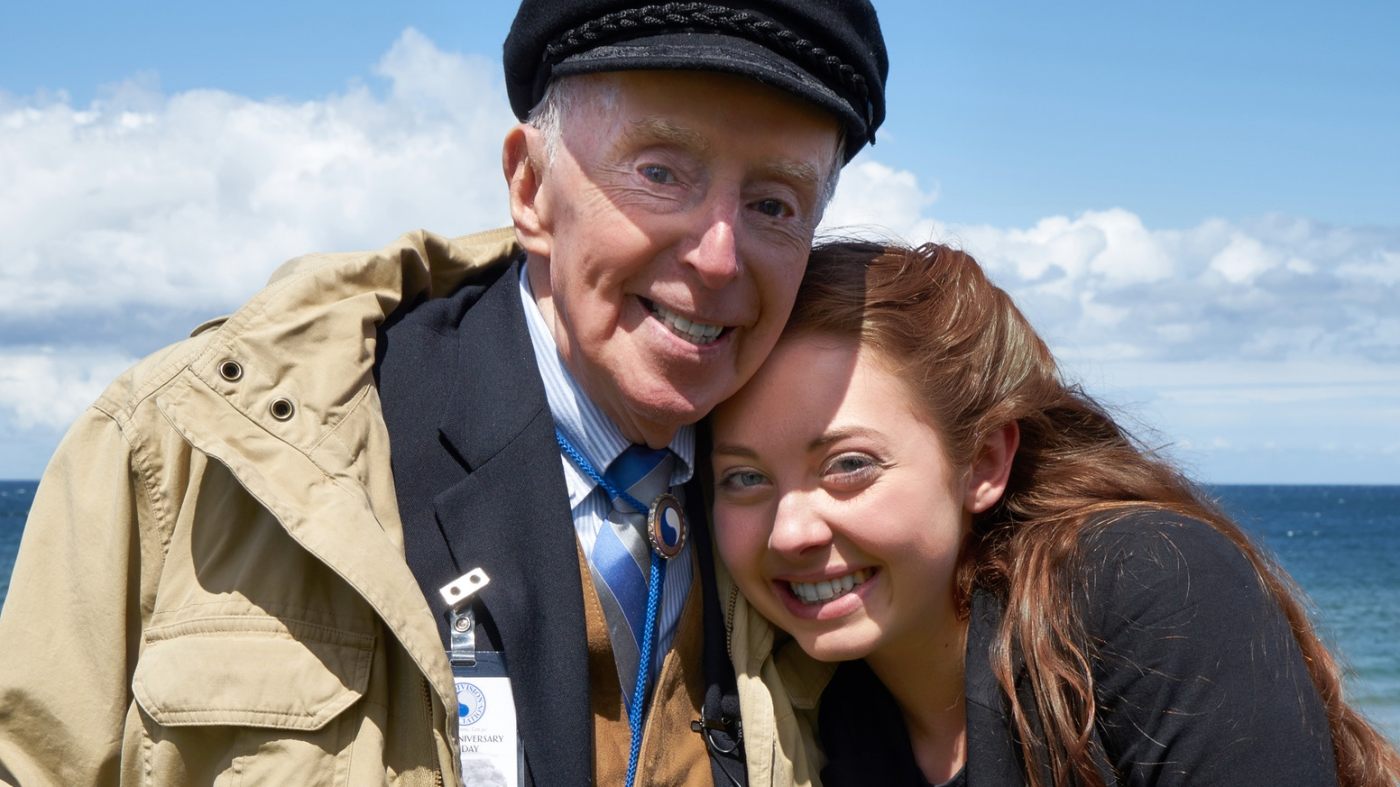 Arden Earll is a Pennsylvania native who landed on Omaha Beach in the first minutes of the D-Day invasion as a member of Company H, 116th Infantry, 29th Division. He holds two Purple Hearts for war wounds.

Sunken Roads: Three Generations After D-Day is a feature-length documentary following a group of D-Day Veterans on a pilgrimage to retrace their route from WWII. Sunken Roads paints an intimate portrait of these soldiers during their final journey to Normandy; all but two of them have passed away since the making of the film.

Charlotte Juergens is an independent documentary filmmaker and archival researcher and is the Director of the film Sunken Roads: Three Generations After D-Day.

Charlotte writes: I shot Sunken Roads when I was twenty years old. When the Veterans were that age, they’d trained for the D-Day invasion in Cornwall, crossed the channel to Omaha Beach, and fought to liberate French towns from German occupation. Although they were still haunted by memories of horrific carnage, these soldiers felt compelled to return to Normandy, to “make the circle”, as one of them put it. I was honored to accompany them.

A serendipitous series of events led me to make this film. I’d become increasingly intrigued by the story of my great grandfather, Sgt. Parker (Pat) Davie Hanna Jr., a Stars and Stripes correspondent who attached himself to the 29th Infantry Division for D-Day. In 2014, I discovered that a group of D-Day Veterans from the 29th was planning a pilgrimage to Normandy for the 70th Anniversary. One veteran named Don McCarthy needed a chaperone from England to France. If I accompanied him, I could join the whole group of 29ers on a tour through the towns they liberated.

D-Day Survivor Suzanne Gandon and US Veteran Don McCarthy are featured in the documentary. His landing craft capsized on D-Day, and later on he was wounded on Omaha Beach.

Don and I spent four days in Cornwall, where the 29ers trained for the Normandy invasion. My most precious memories of Cornwall are of sitting with Don in the car, listening to him talk for hours about his memories of D-Day and feelings about returning to these locations. We logged many hours on the road in Normandy, and I used this time to interview Veterans. I grew particularly close with Veterans Arden Earll and Hal Baumgarten, who became major characters in the film. A month after I’d arrived with Don, I packed up my gear and said goodbye to Normandy. I was exhilarated; I had stories to tell.

Five years have passed since our pilgrimage in 2014, and during that time, I’ve dedicated myself to finishing the documentary. We funded the film through Kickstarter and assembled an incredible team to bring us across the finish line. The completed film stands as an exploration of memory, intergenerational relationships, and the human desire to commemorate. It is also a record of the voices of a fading generation. I believe the upcoming 75th anniversary of D-Day is the perfect moment to share Sunken Roads with the world, and I’m so grateful for the enthusiasm and support of the Veteran community. We’ll have sneak-peek screenings this summer at the National WWII Museum, the National Museum of the U.S. Air Force, the National Veterans’ Memorial and Museum, and the Pearl Harbor Aviation Museum.

I’d love for you to join us. Please visit our website www.sunkenroads.com to reserve tickets.