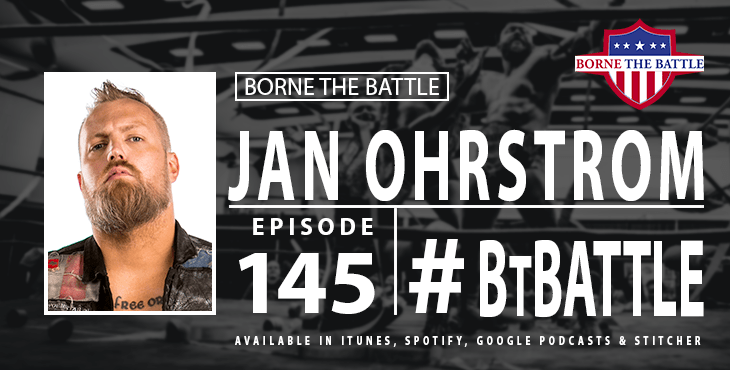 Between this episode and the last Veteran of the Day I wrote, you can probably tell I have an interest in professional wrestling. During the “Monday Night Wars” and the “Attitude Era,” I used to watch every week, twice a week. I don’t watch anymore, but wrestling got me into podcast listening because I still follow the “dirt sheets.” The backstage stories keep me in tune with the current state of the wrestling business. The independent scene is currently in a resurgence with a lot of talent currently testing free agent waters – moving from promotion to promotion – in charge of their own creative license.

Not only is Army Veteran Jan Ohrstrom a wrestler, he’s a producer of the documentary “Valhalla Club.” The feature documents how three wrestlers, including Jan, formed a wrestling stable based on collectively fighting their PTSD through wrestling. The doc details each wrestler’s combat experience, how they adjusted to coming home and how they each found wrestling. If you have an Amazon Prime subscription, you can watch is for free.

Recently, Jan and his stablemates were featured on the first episode Comedy Central’s new show, “Klepper.”

Currently, one of his stablemates is feuding with the former Green Mighty Morphin Power Ranger, Jason David Frank. They expect their match to happen sometime in July.

It’s official Mr. Studtacular Brysin Scott and JASON DAVID FRANK – Official Fan Page will sign the Contract on Friday, April 19, 2019 at Kings & Queens Ballroom in New Braunfels, Texas. Inbox for more details about Post Event Meet and Greet with JDF. Get your Presale tickets at EventBright Follow the Link to get your tickets today! https://www.eventbrite.com/e/lwa-gonna-break-your-broken-rules-tickets-57809798664?aff=eand

A post shared by Laredo Wrestling Alliance (@laredowrestlingalliance) on Mar 28, 2019 at 9:13pm PDT

Additionally, Jan is a VA employee. We talked about his role in the Office of Business Process Integration.

Overall, I was excited to have Jan on the Borne the Battle for four reasons: