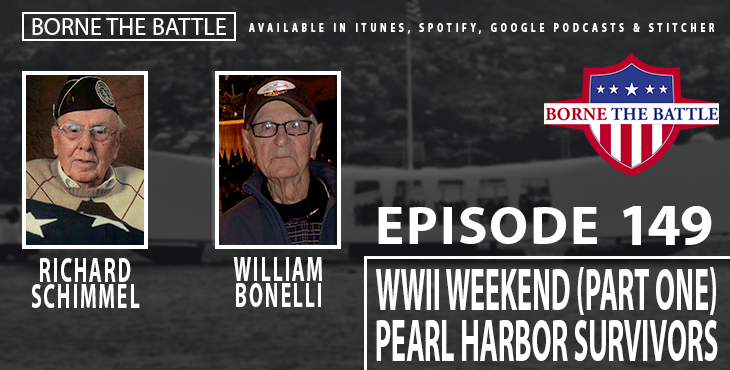 Last weekend, Reading, Pennsylvania, turned back the clock. For three days (June 7-9), the Mid-Atlantic Air Museum held it’s annual WWII Weekend. WWII reenactors and a full air show to their regional airfield. The reenactors represented every theatre, every enemy, period music and even an FDR impersonator.

“December 7th, 1941, a date which will live in infamy.” —FDR “We will #fight them on the land, in the #sea, and in the #air” — W. Churchill #WWIIDays #GreatestGeneration #Military #History #War #Army #Navy #USN #USAF #Marines #USMC #DDay #Veterans

A post shared by Department of Veterans Affairs (@deptvetaffairs) on Jun 8, 2019 at 8:25am PDT

More importantly, WWII days included an impressive VIP guest list. Over twenty WWII Veterans attend every year to recount their experiences. On this episode of “Borne the Battle,” we focus on two survivors of Pearl Harbor.

Richard (Dick) Schimmel was one of the first soldiers to ever work with radar. He enlisted in 1940 and was shipped out to Hawaii to join the newly formed Signal Aircraft Warning unit as a plotter and switchboard operator. “It was so new, nobody knew what it was,” Schimmel joked. He wasn’t on duty but was stationed on Pearl Harbor during the attack. When he realized the island was under attack, he ran to his post.

William Bonelli was an enlisted B-17 and B-29 mechanic at Hickam Field when the attacks occurred. In 1944, he got his opportunity to fly the “Flying Fortress,” including 30 missions over Italy (21 as squadron leader) and later received the Distinguished Flying Cross for his actions.

Enjoy this episode, and listen to both of these unique accounts of the attack on Pearl Harbor. Starting on June, 26th we will return to the WWII Weekend for part two.