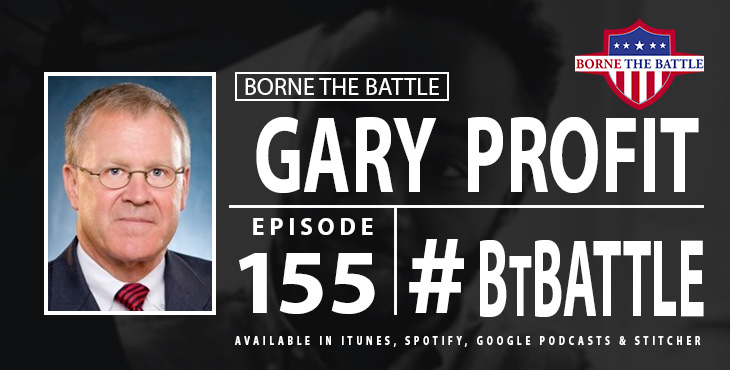 Back in episode 43, Gary gave his original testimony on Borne the Battle.

This week’s Borne The Battle episode provides an update from the Senior Director of Military Programs at Walmart on the hiring initiatives through the company and the Walmart Foundation donating $1 million to Hire Heroes USA.

Army Veteran Gary Profit was commissioned as a second lieutenant in 1974 after graduating from Eastern Michigan University. He served as an artillery officer in the Army Reserves before switching to active duty. In his career, Profit served at U.S. Special Operations Command South (then in the Republic of Panama), and as a Congressional fellow. He retired as a brigadier general in 2006.

Profit worked as a defense contractor before hearing of the Walmart opportunity through a retiree network contact. He met with Walmart officials and became the first person to serve in his role—a role that has now spanned a decade. He plans on retiring by the end of this year.

Walmart has a rich history with the military. Its founder, Sam Walton, served in the Army from 1942-1945. Profit said this personal history is what drives Walmart’s strategy toward hiring Veterans.

“The cornerstone of it is obviously the very organic work that we can do to hire Veterans and military spouses, the value we place on them, and the importance of them joining our teams and making us better,” he said.

Initially, Walmart wanted to hire 100,000 Veterans through its Veterans Welcome Home Commitment, but later doubled the commitment to 250,000 by the end of 2020. To date, Walmart has hired more than 226,000 Veterans since Memorial Day 2013.

Walmart is also trying to help with the disproportionate unemployment of military spouses, giving hiring preference to spouses who seek employment at Walmart or Sam’s Club through the Military Spouse Career Connection, which started Nov. 12, 2018.

Additional Links to this week’s Episode: