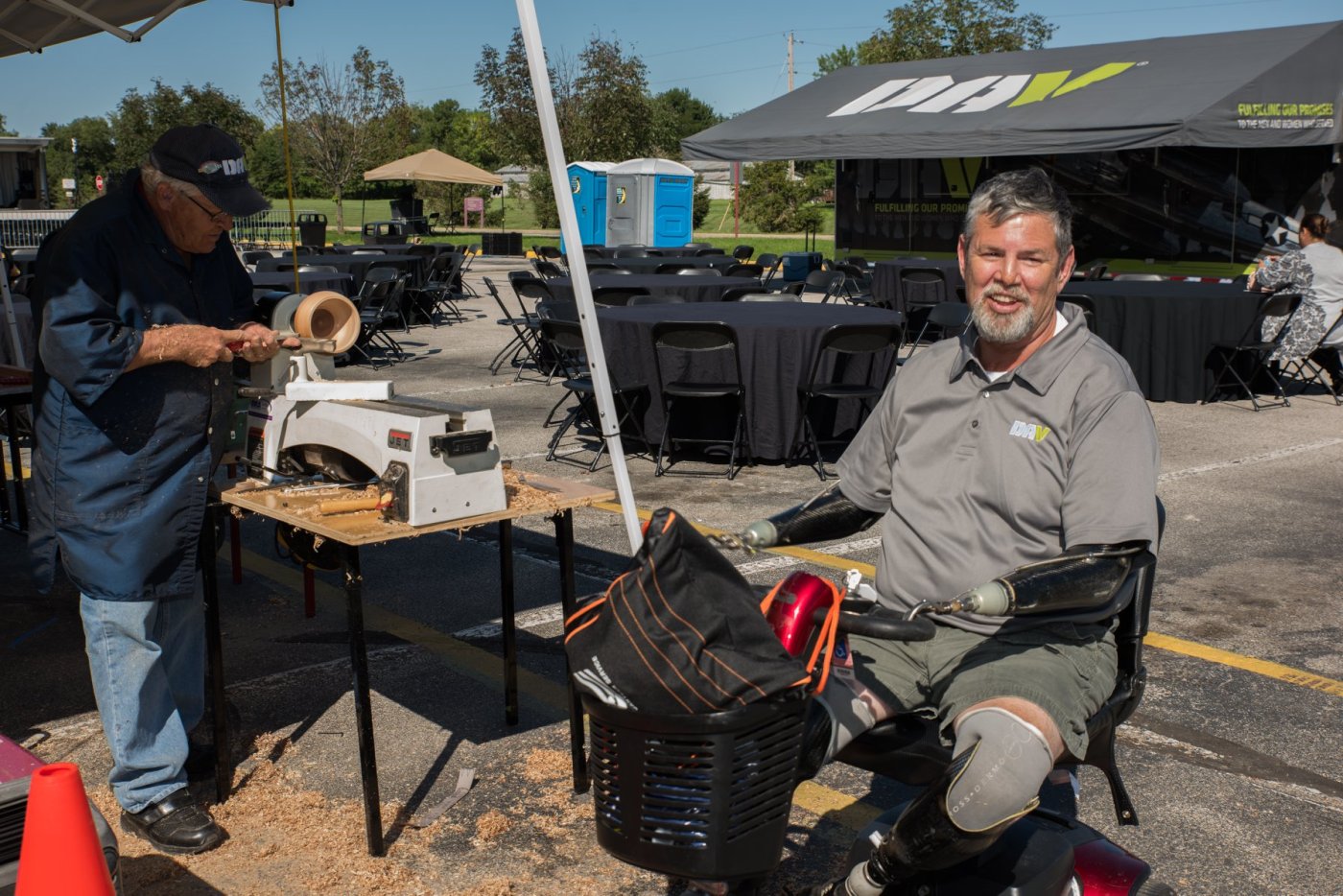 A golf pro at the National Veterans TEE Tournament, cosponsored by VA and DAV.

Something horrible was going to happen.

Dave Riley was on a camping trip with his wife and kids to Dauphin Island in 1997 but couldn’t shake that feeling. Within a day, he was fighting for his life in a medically-induced coma while a bacterium attacked his limbs and organs.

Doctors amputated both arms below the elbows and both legs below the knees.

“Doctors said I damaged my spleen, and that’s like the oil filter for the body. I went into septic shock, and that cut off blood to my extremities. After that came gangrene.”

Riley, who served four years in the Army as a radar repairman before transferring to the Coast Guard to become an aviation rescue swimmer, was medically retired. But 30 days after rehab, he went back to school, got a bachelor’s and master’s in computer science and a new career field. Military friends helped build him ramps until he could build a completely wheelchair-accessible home.

Riley will be at this year’s National Veterans Disabled TEE Tournament, Sept. 8 to 13 in Iowa City, along with 300 blind, amputee and paralyzed Veterans. The Iowa City Veterans Affairs Health Care System and  Disabled American Veterans will host the event.

“They take you to the top of that mountain and push you off, you’re gonna get that adrenaline back. That’s what brought me around.”

— Dave Riley, who lost all four limbs and used VA’s Winter Sports Clinic and TEE Tournament to help himself and inspire others to do the same

The TEE Tournament is a place Riley never thought he’d be after waking from that coma.

He was lucky, he said, to have his wife and children stick by him.

By all accounts, he adjusted well to life’s new normal.

“But depression is a real creepy thing,” he said. “It creeps up on you.”

By 2008, his friends in the local Disabled American Veterans group in Mobile, Alabama, knew he was struggling and got him signed up for the National Disabled Veterans Winter Sports Clinic, where paralyzed, amputee and other Veterans are taught to ski in Colorado.

“And that really turned me around,” he said. “I realized that was the problem; I was an adrenaline addict as a swimmer, I used to race motorcycles and all this crazy stuff. When I lost limbs, it stopped. I didn’t realize I missed that until they brought me to the Winter Sports. It didn’t cure my depression, but it sure helped me out.

“They take you to the top of that mountain and push you off, you’re gonna get that adrenaline back. That’s what brought me around.”

“They gave me drivers and irons that fit right into my arm. They go right in the wrist. I pull the hook out and the clubs click in.”

— Dave Riley, describing his special-made clubs at the TEE Tournament

DAV named Riley its Veteran of the Year in 2010 and he became the organization’s national chairman from 2016 to 2017. He participated in adaptive sports ever since that first time on the mountain and will make his third trip to the TEE Tournament.

And yes, the man with no limbs will play golf.

“I may have hit a golf ball here and there before, but never really played golf,” he said. “The first year I went to the tournament, they made clubs for me. They put me on a computer and analyzed my swing. They gave me drivers and irons that fit right into my arm. They go right in the wrist. I pull the hook out and the clubs click in.”

Riley credits Dr. Lucille Beck, VA’s deputy undersecretary for health for policy and services, with getting hm and others engaged through adaptive sports.

“She is working miracles,” he said.

Now Riley is just like any other golfer with his share of bad shots and stories abut that one perfect swing.

“Yeah, that ‘Ping!’ sound it makes when you hit the ball just right. You get it a couple times and you just know. It makes you feel good through your whole body.

“That’s the one thing about this tournament,” he said. “They really have some of the best golfers giving techniques and lessons. It’s really something to go up there and see newer Vets, who are now experiencing the same things I first experienced three years ago, and it’s something to watch them go out there and hit that ball.”

The key to healing

The four-day clinic brings Veterans from around the U.S. onto the golf course. Although it is centered around golfing, it includes exposure to other recreational activities such as kayaking, pontoon fishing, horseback riding, horseshoes, disc golf, adaptive biking and other health educational opportunities.

Beck downplayed her role in the process and gives credit to the Veterans for discovering their limitless possibilities.

“It’s the most gratifying part of our jobs in VA. It’s why we do what we do,” she said. “Watching Dave and these other Veterans come out wearing prosthetics we made or helped them get, watching them stand for the first time because of a special cart, or hit the golf ball even though they can’t see, then watching them get back into life, that means the world to us.

“Adaptive sports and recreation therapy are key to healing, physically and mentally,” she added. “We’re also grateful to Disabled American Veterans and other organizations who partner with us, because it takes the entire community and all the volunteers to make a difference. We couldn’t do it without them.”