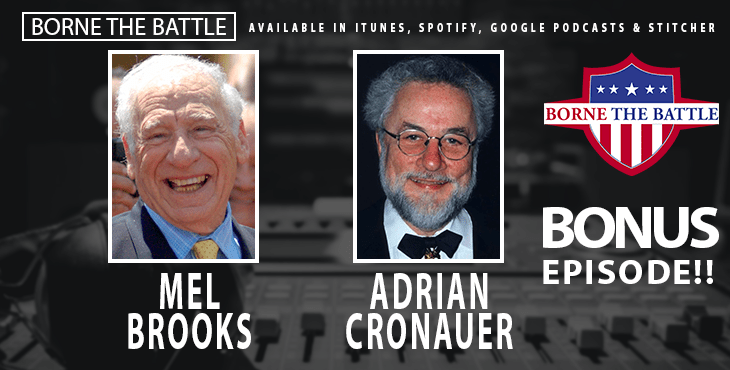 For months, I’ve been promising a special bonus podcast episode for when “Borne the Battle“ received its 100th rating and/or review on iTunes.

We did it! But, before we get to Mel Brooks and the late Adrian Cronauer, I wanted to share my own BtB story, and explain where we’re going in the future.

In 2016, I was working at NASCAR Productions. It was a great experience, but I wanted to do more with my free time after work instead of just playing XBOX. I organized a podcast with some friends, called “The SmokePit,” a Veteran-themed show that centered around military and Veteran news.

The planning was there, but it fizzled out without even recording one episode.

Instead of starting the “The SmokePit,” I decided to go back to school. I used the GI Bill at Arizona State University. I hadn’t given up the idea of podcasting, but focused on completing my bachelor’s degree by 2018. When I came back around to a starting a podcast – a future guest of mine came up with a perfect name for his podcast – “The SmokePit.”

Fast forward to March 2019. That’s when I was offered the “Borne the Battle” podcast reins from Tim Lawson. He asked me what the “Tanner Iskra” Borne the Battle would look like. I don’t remember what I said in the interview, just that I walked away thinking, “Time to get your (expletive) together, Tanner.”

So, I quickly made five goals:

In these short five months since I took over BtB, I’ve learned A LOT about podcasting. One thing I learned is that your placement on iTunes correlates with a lot of other factors – ratings and reviews among them.

So, I held onto one of my most compelling pieces of content until we reached 100 reviews on iTunes. I didn’t want to bury it when the algorithms wouldn’t prioritize our reach. You, our listeners, got us over the hump, and now more Veterans each week are tuning into YOUR show.

In five months, our listenership has increased 500%. You’ve allowed more Veterans, VA employees and civilians to hear these amazing stories and to take advantage of all the benefit breakdowns in our archives.

Additionally, the production of the podcast has grown. We have always had a tremendous team of transcribers, but I used to be a the only one producing the content. We now have a dedicated team of interns from around the country. Some are Veterans, but many are students that have never connected with Veterans before – and they are learning about our community through these stories.

Finally, you may have seen the logo, but once we have finalized all the necessary directives – I can confidently say that we will soon be bringing a VA Podcast Network to your ears. All this is due to your continued support, so please keep those recommendations and reviews coming in!