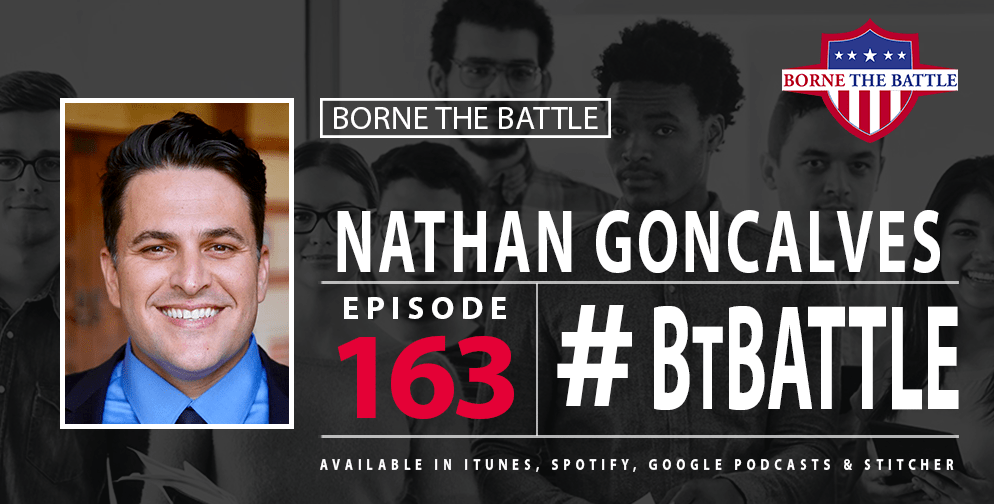 On this week’s episode, Borne the Battle features guest Nathan Goncalves, who shares his story of struggle and perseverance.

While Goncalves didn’t have the intrinsic calling to join the military, he enlisted at 23, seeking reform and discipline. It was in the Army that Goncalves sharpened his focus and developed lifelong friendships and mentors.

However, Goncalves’ transition back to civilian life was not easy. In fact, it turned out to be some of his lowest valleys–involving addiction, PTSD, and anger management.

But things started to change when Goncalves heard he was going to be a father. In this episode, he discusses how an intense work ethic allowed him to achieve a bachelor’s degree at UCLA in less than three years.

Goncalves applied to UCLA’s Law school to study corporate law. He was accepted, but a bitter divorce hampered those plans. Through his own experiences, Goncalves realized there was no advocacy for situations like his own. So he sacrificed a potentially lucrative corporate law career and switched to family law to offer services to homeless and low-income Veterans.

Goncalves is now hosted by Harriet BuHai Center for Family Law and sponsored in house by Equal Justice Works. He continues to fight for family integration for homeless and low-income Veterans as they transition back into the civilian communities.

Listen to the full episode HERE

Hayoung Oh is a podcast intern with the VA’s Digital Media Engagement Team. He is currently an undergraduate at UC Berkeley studying Public Health.