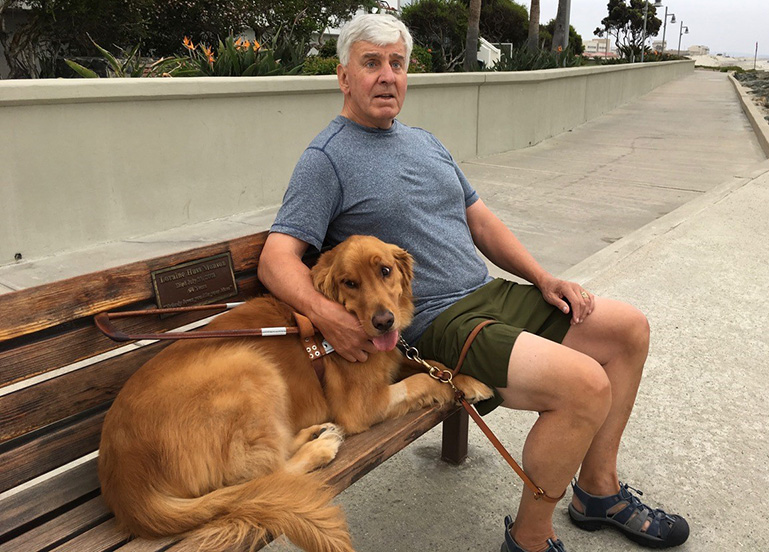 David Szumowski had been in Vietnam only 40 days when his tank platoon was attacked during a recovery mission near the Michelin rubber plantation northwest of Saigon. His tank took a direct hit from a rocket-propelled grenade, and the fragmentation wounds left Szumowski totally blind.

After recovering at Walter Reed Medical Center and the Edward Hines Jr. VA Medical Center, Szumowski was accepted to the University of Denver law school. He worked for a time as a benefits counselor for VA in San Diego, Calif., and later helped start the Vietnam Veterans Leadership Program there. He went on to be a prosecutor in the San Diego District Attorney’s office and then a San Diego County Superior Court judge—a position he held for 18 years until he retired in 2016.

Szumowski was still recovering from his wounds when he was introduced to NLS, the National Library Service for the Blind and Print Disabled. NLS serves people like Szumowski who are blind or have low vision, as well as serving people with physical disabilities–people who have had a stroke, for example, or have suffered a traumatic brain injury–that makes it difficult to read regular print.

Through its national network of cooperating libraries, NLS circulates books and magazines in braille or audio formats, delivered by postage-free mail or instantly downloadable. NLS provides playback equipment for audio books received in the mail, and there’s an app that makes listening to downloaded books on smart devices a cinch.

Better yet, it’s all free! And by law, Veterans–whether or not their visual impairment or disability is service-related–go to the front of the line at NLS.

In the hospital, “I started reading a lot–it was a way to kill time,” Szumowski recalls. One of the first NLS books he read was a time-killer for sure: Tolstoy’s War and Peace, which–in 1969–was available on a set of 43 16-rpm records. (Now it can be downloaded.)

In the five decades since he lost his sight, Szumowski has read thousands of books (“I stopped counting long ago at 2,000,” he says), many of them from NLS’s extensive collection. Just like a public library, NLS has tens of thousands of books of all kinds, from current best sellers to the classics, as well as an array of books of interest to people with disabilities. NLS has dozens of magazines in braille and audio too, including Sports Illustrated, Consumer Reports, American History, Southern Living, and Smithsonian.

And if you’re a musician, or want to learn to play an instrument, NLS has the world’s largest collection of braille music scores and braille and audio music instruction and appreciation materials.

NLS also produces guides on a variety of topics of interest to people who are blind or disabled. One of them, Resources for Disabled Veterans, was updated just last year and includes contact information for organizations that help Veterans with employment and rehabilitation, financial and legal matters, physical and psychological health, and more. It’s available to NLS patrons and the general public on our website, at www.loc.gov/nls/resources/general-resources-on-disabilities/resources-for-disabled-veterans/. NLS also has guides on topics such as travel and recreation for people who are visually impaired, accessible video games, and where to get Bibles and other sacred writings in audio, braille, and large print.

Many libraries in the NLS network sponsor events specifically for patrons who are blind or disabled, such as audio-described movie nights, book clubs, health fairs, “touch tours” of local museums, and classes on all kinds of technology topics–like how to customize your mobile phone or tablet, or how to use popular shopping apps.

And since 2015, NLS has partnered with the Bureau of Engraving and Printing to distribute iBill currency readers, free of charge, to any blind or visually impaired U.S. citizen or legal resident who requests one. You can find out more about that program at www.bep.gov/resources/meaningfulaccess.html.

Now that he’s retired, Szumowski tries to read two or three books each week. He’s also told his own story in a memoir titled Reach for More: A Journey from Loss to Love and Fulfillment. It will be added to the NLS collection later this year.

What impact has NLS had on his life? “It provides an opportunity for me to learn things I’d like to learn and travel to places through reading that I’d otherwise never get to see,” Szumowski says. “It’s also been a tremendous source of pleasure for me.”

If you have a visual or physical disability that keeps you from reading regular print, enrolling in NLS is easy. Just call 1-888-NLS-READ (1-888-657-7323) and follow the prompts to be connected with the NLS network library that serves your state. You can also find more information about NLS and how to enroll at www.loc.gov/thatallmayread.