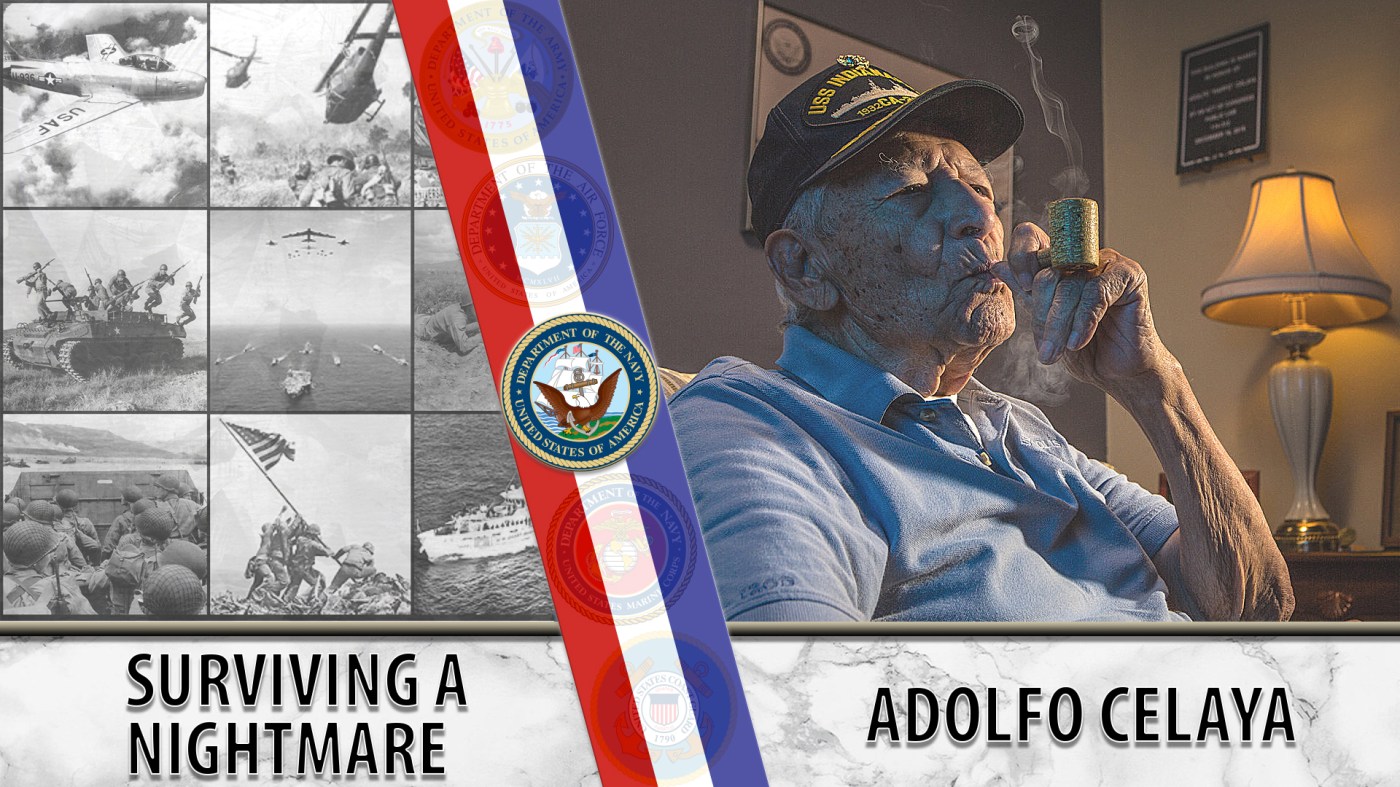 Navy WWII Veteran Adolfo Celaya was one of the few survivors of the USS Indianapolis. He later returned to high school and played for his school’s basketball team.

The 1975 American film thriller Jaws led to many viewers fearing the ocean. In the film, a giant man-eating great white shark attacks beachgoers at a New England summer resort town. It’s up to a local sheriff, a marine biologist and a fisherman to hunt the beast down.

One of the more unsettling scenes from the movie was fisherman Quint’s revelation that he survived the sinking of the USS Indianapolis. He and his fellow sailors ended up in the water, becoming prey for sharks as they drifted alone at sea for days until rescued. Quint described the frightening experience of a shark looking at you with its black, lifeless eyes, hearing the screams of other men and watching the ocean turn blood-red.

This story represented the real-life tragedy of those serving aboard the Navy cruiser during World War II. On July 30, 1945, two Japanese torpedoes struck the USS Indianapolis just days after delivering components of the atomic bomb later dropped on Hiroshima. Within 12 minutes, the flagship of the U.S. Navy’s 5th fleet sunk. Of the 1,196 people on board, around 900 made it into the water alive. After five days at sea, only 317 survived.

Adolfo “Harpo” Celaya is one of the few remaining survivors of the USS Indianapolis. The Smithsonian has called this event one of the worst shark attacks in human history.

Celaya enlisted in the Navy in 1944 when he was 17 and fought in both the Battle of Okinawa and the Battle of Iwo Jima. He reached the rank of fireman second class while recovering from the attack, and returned to high school after his discharge at 18.

He spent his days drinking at local bars to cope with his trauma. Things took a turn for the better when a Florence High School basketball coach encouraged him to join the basketball team while getting paid through the GI Bill.

Despite being considered the best basketball player in town, the principal demanded he not be put in the starting line up because of his Mexican heritage. But the following year, he led the Florence Gophers to the state playoffs, even as signs in the stands at his games read “No Mexicans” or “No dogs allowed.”

Sometimes he would speak Spanish during his games, such as calling out “Tire la pa’ ca!” when he wanted his English speaking teammates to pass the ball to him. At one point, the coach of an opposing team accused the Florence team of cheating, claiming that his use of Spanish gave them an unfair advantage.

But the Purple Heart recipient recalled struggling with PTSD during his games. He would sometimes envision the opposing team as his attackers out at sea. “Well, I had five guys from Douglas running after me, and it would look like sharks coming after me,” he said.

From surviving war to winning a high school basketball state championship, the 92-year-old can smile about it all now. “As a 17-year-old kid, you dream about those things, but I never thought it would happen.”

Details for this story are hyperlinked to original sources, including the Library of Congress’ Veterans History Project.