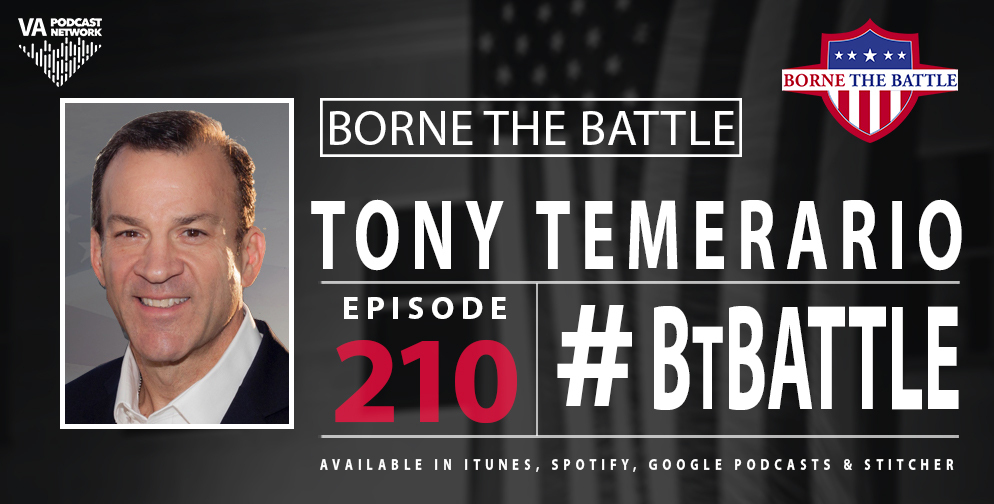 This week’s episode of Borne the Battle features Army Veteran Tony Temerario, who was also a 9/11 responder and a current AT&T executive.

Fire fighters and military personnel on the roof of the Pentagon unfurl a large American Flag during the Sept. 12, 2001, visit of President George W. Bush to the site of the previous day’s terrorist attack on the Pentagon. As the flag was draped over the wall, just south of the site where American Airlines Flight 77 impacted the building, the disaster workers gathered around the President began to sing God Bless America. DoD photo by R. D. Ward. (Released)

Temerario’s parents were both WWII Navy combat Veterans. They served in the Pacific and in Operation Neptune during the Normandy D-Day Invasion in 1944. Temerario grew up in the Washington, D.C., area and was so influenced by service that he joined the military, too. In the podcast, he talks candidly about his experiences in the military and on scene at the Pentagon after 9/11, including re-establishing communication networks for first responders and, later that night, the emotions of seeing the flag draped over the side of the Pentagon walls.

It wasn’t long after the attacks that Temerario deployed with his Army National Guard Special Forces Unit. His actions at the Pentagon and overseas earned him several Army and civilian honors, including an Army Meritorious Service Medal and three State of Maryland General Assembly Official Citations for Honor, Valor, and Bravery.

Now, Temerario is the Director/Client Executive for AT&T’s Mobility IoT platform. A result of the challenges he experienced on 9/11 at the Pentagon led to the creation of FirstNet, a public-private partnership with AT&T. FirstNet was developed as a nationwide, low-band frequency network that prioritizes voice and data to first responder networks. It offers priority connectivity for emergency voice and data services during catastrophic events without interference or blockage.

Outside of work, Temerario is an ambassador for Carry The Load, which “provides an active way for Americans to connect with the sacrifices made daily by military Veterans, active service members, first responders and their families.” As a Carry the Load ambassador, he is also an active member in its Patriot Program, Carry The Flag, which aims to inspire patriotism to a new generation of kids.

Army and Marine Veteran Guillermo Osorio is a podcast intern with VA’s Podcast Writing Team. He is a graduate of the University of Maryland Global Campus with a B.A. in Communications Studies.