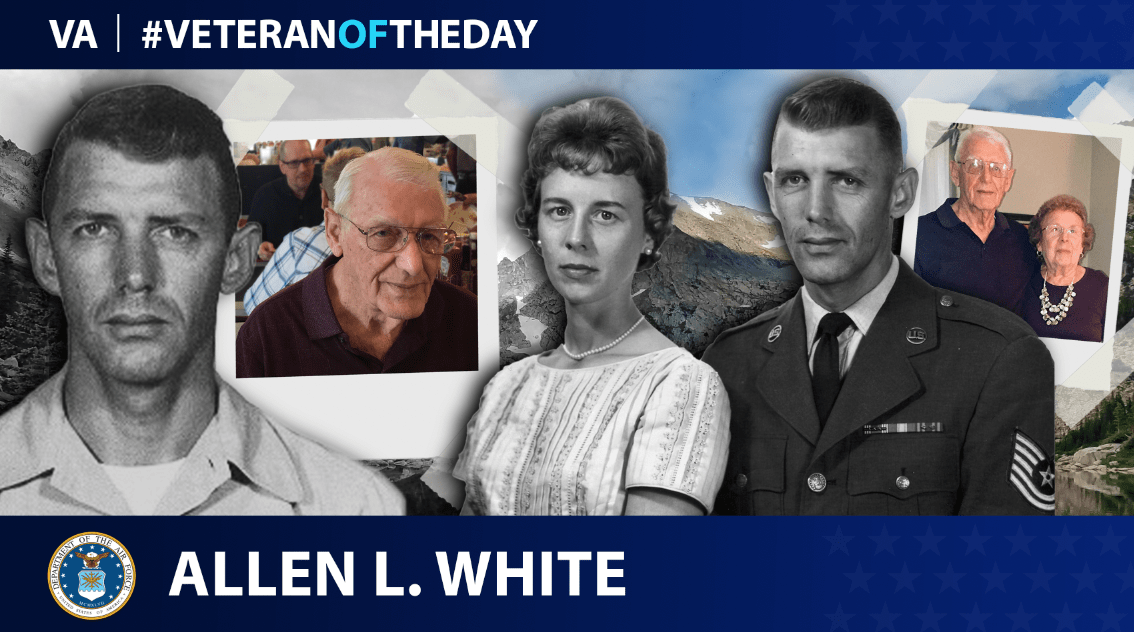 Today’s #VeteranOfTheDay is Air Force Veteran Allen L. White, who served during the Korean War and Vietnam War during a 25-year career.

Allen L. White was born in 1931 in Rochester, New York, and raised in the nearby town of Pittsford. Upon graduating high school, he attended the Rochester Institute of Technology until 1950. When it looked like the military might draft him for the Korean War, White and his friends enlisted in the Air Force.

White’s career in the Air Force commenced with basic training in Lackland Air Force Base in Texas. Afterward, he served at various Air Force bases throughout the country where he completed additional training. While stationed at Forbes Air Force Base in Kansas, White met his future wife, Mary Katherine. After his station in Kansas, he transferred to Hunter Army Airfield in Georgia to join the reactivation of the 308th Bomb Wing.

In 1953, White served with a B-47 Stratojet unit. He switched fields here, becoming an air operations specialist. Soon after this, White deployed to Sidi Slimane Air Base in Morocco.

White went to Tinker Air Force Base in Oklahoma in 1955, where he joined the 506th Strategic Fighter Wing. In 1957, he became a member of the Military Air Transport Service (MATS) control team at South Ruislip Air Station in the United Kingdom to help with the de-escalation of Strategic Air Command movements in the area. White later transferred in 1958 to Madrid, Spain, where he helped handle MATS movement for two years. He returned to the U.S. in 1960, where he went to Maxwell Air Force Base in Alabama, working in command and control and rear headquarters.

In 1965 during the Vietnam War, White served for one year with the 35th TAC Fighter Wing Command Post in Da Nang, Vietnam. After returning to the U.S., he resumed work at Maxwell Air Force Base until 1970, when he moved to Fort Ritchie in Maryland to support an underground Pentagon site.

White retired in 1974 with the rank of master sergeant after 25 years in the Air Force. He currently lives in Waynesboro, Pennsylvania, with his wife of 68 years, Mary. They have three children and one grandchild, Katie.