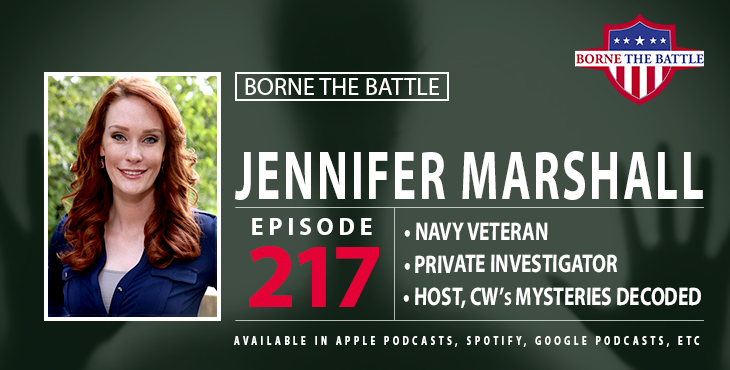 This is not your typical episode of Borne the Battle. It’s a Halloween Special with returning guest and Navy Veteran, Jennifer Marshall. Marshall is an actress and a trained private investigator. In “Mysteries Decoded,” an ongoing paranormal series on the CW television network, she gets to put those skills to work on paranormal activity, like vampires, Bigfoot, Area 51, The Mothman and many others.

In the podcast, Marshall shares some of her theories on Bigfoot, based on her interviews with academics and observations while spending time in British Columbia.

Marshall switches to talking about temporarily shutting the show down, due to the COVID-19 outbreak, and how being flexible in switching to Zoom interviews allowed her team to be creative in making episode updates.

Later, she shares her personal investigations into Area 51, as well as other alien evidence that marries up to new revelations from the government, in reference to recently confirmed naval UAP (AKA UFO) footage.

Marshall then reveals her laundry list of dream mystery investigations, including other paranormal mysteries over international waters; the Australian Bigfoot, Yowie; a Titanic conspiracy, and the haunted Waverly Sanitarium in the United Kingdom. Eventually, she would like produce a true crime program that delves into military true crime cases and mysteries.

Borne the Battle Veteran of the Day:

Guillermo Osorio is a VA Podcast Writing Intern and a graduate of the University of Maryland Global Campus with a B.A. in Communications Studies.