Borne the Battle #221: Air Force Veteran Mark Harper, President and CMO, We Are the Mighty 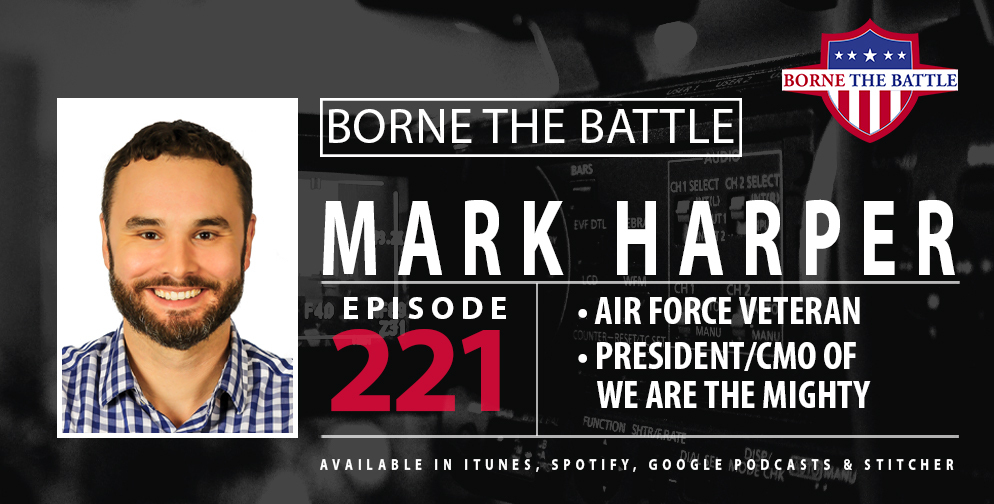 This week’s Borne the Battle features Air Force Veteran Mark Harper, who found his niche as a content creator for combat camera. After leaving service, he leveraged his military experience for a career in the entertainment industry. He now leads a media company that publishes military stories.

The son of a green beret, Harper earned his undergraduate degree and commission through Air Force ROTC at Rensselaer Polytechnic Institute in Troy, NY. The 9/11 attacks prompted his deployment to Iraq as part of a communication squadron. In 2004, his animations, cartoons and videos received recognition, and he was referred to and joined combat camera. For most of his Air Force career, Captain Harper was the video flight commander for the 1st Combat Camera Squadron.

In combat camera, Harper led combat-ready documentary teams that showed the world a glimpse into military operations, contingencies, exercises, weapons tests, and humanitarian relief operations. He used his position and leadership to teach Air Force commanders how useful media is for missions and how it can change and even save lives. Additionally, he led teams of trained visual information professionals in global deployments to provide the Department of Defense (DoD) footage of wartime and peacetime activities.

Due to a 2007 reduction of forces, Harper left the Air Force and headed to Los Angeles to look for work in Hollywood.

Although he entered the entertainment industry at an inopportune time, Harper persevered. He eventually found work at companies like Paramount and Technicolor before moving into entrepreneurship, where he co-founded Audeze LLC and landed $4 million in startup costs in a pitch to Atlantic Records.

After leaving Audeze, Harper met with David Gale, who offered him a position as a content producer for a new media company that focuses on telling the military’s story. Instead of accepting, he decided to give his own personal pitch on his skills, experience, and accomplishments to rebrand himself for a better job – and it worked. Gale offered Harper a co-founder title with We Are the Mighty.

We Are the Mighty is a multi-platform media brand dedicated exclusively to creating genuine and impactful content for the armed services community. As the company moves into 2021, Harper hopes to expand the company’s current intellectual property and move into longer form content.

Mentioned in this Episode:

Jabari Shakir is a podcast intern with VA’s Digital Media Engagement Team. He is a journalism undergraduate at Massachusetts College of Liberal Arts.