Borne the Battle #223: Tom and Jen Satterly, All Secure Foundation 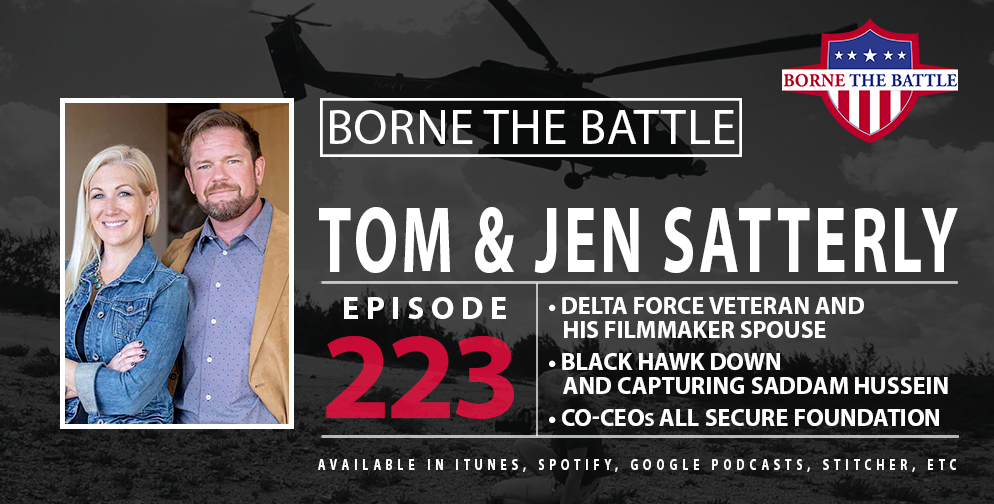 US Army and Delta Force Veteran Tom Satterly and his spouse Jen Satterly are the co-founders and co-CEOs of All Secure Foundation, a nonprofit that focuses on helping Special Operations soldiers, Veterans and their significant others who are struggling on the home front from the effects of war.

Jen is an award-winning photographer and filmmaker who spent three years embedded with an elite Special Operations training company as director of film and photography. She became a Certified Health Coach in the course of her research into Post Traumatic Stress (PTS) and Traumatic Brain Injury (TBI).

When Tom retired from military service, he felt like a burden to society. Early on in Tom and Jen’s relationship, he was on the verge of ending his life. Then he received a text from Jen. That text snapped him back to reality, saving his life.

Tom’s mental health struggles resulted in court-mandated therapy. In therapy, he discovered the root of his issues: Post Traumatic Stress. Relieved to have something to focus on treating, the Satterlys began a journey toward healing themselves, as well as other couples suffering from the effects of war.

The Satterlys’ experience with PTS pushed them to establish the All Secure Foundation (ASF) in 2017, which helps warrior couples heal from trauma caused by disconnection and war. They decided to bring their passion for service to the Special Operations community by supporting their fellow warrior families at home.

The ASF seeks to foster understanding of trauma and PTS as natural, biological responses to war that cannot be willed away. If the warrior is the only one who receives help, the home will still have issues; therefore, they offer support and treatment for spouses who suffer secondary PTS. The foundation offers retreats and therapy to aid warrior couples through learning, practice and community.

In this episode, the Satterlys discuss Tom’s unique military career, Jen’s filmmaking career, writing a book as an untrained writer, their journey with PTS, and the founding of the All Secure Foundation.

Mentioned in this episode:

Jana Jenkins is a podcast intern with VA’s Digital Media Engagement team. She is an undergraduate student at the College of Saint Benedict studying Communication.