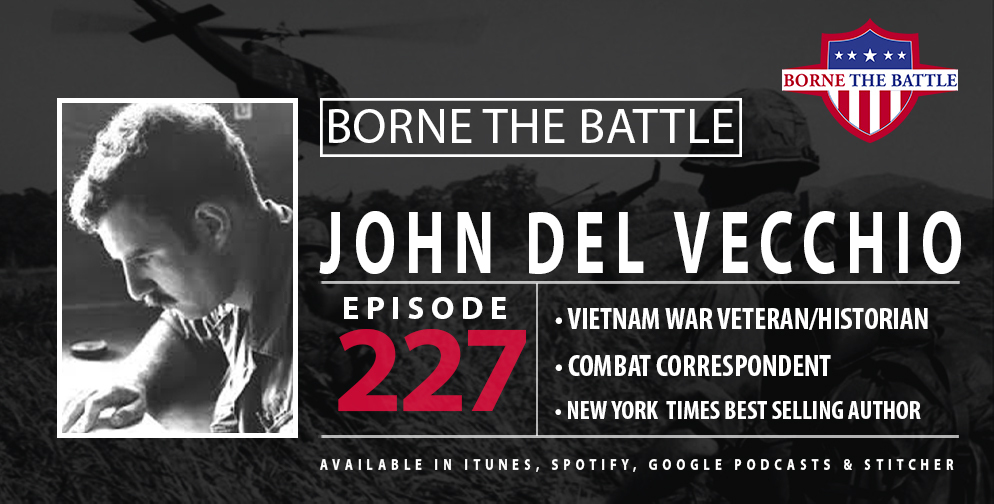 John Del Vecchio attended Lafayette College in the late 1960s, a time when tensions over U.S. involvement in the Vietnam War was high. Anti-war protests emerged all around him and popular media figures constantly spoke of the war in negative terms. He even had professors who refused to teach in protest of the war. Yet, Del Vecchio remained skeptical about how bad things really were in Vietnam. On Nov. 4, 1969, he got his chance to see the Vietnam War for himself.

In this episode of Borne the Battle, Del Vecchio shares how he went from being a combat correspondent to a very accomplished author. Some of the topics covered include:

Having experienced the Vietnam War firsthand, Del Vecchio has prioritized what he calls “setting the Vietnam War’s record straight.” In 1972, Del Vecchio began writing his first book, “13th Valley,” hoping to leave a factual account of the Vietnam War available for future historians and Veterans. The last thing he expected was to write one of the best books on the Vietnam War and to receive acclaim from Vietnam Veterans around the world.

When not fighting against Vietnam War misinformation, Del Vecchio likes to be one with nature. He is an avid hiker who enjoys discussing contemporary American culture alongside stunning photos of nature on his blog.

With a life full of unique and diverse experiences, Del Vecchio’s interview has something interesting for listeners from any walk of life.

Calvin Wong is an intern with VA’s Digital Media Engagement team. He studies History as an undergraduate at the University of California, Davis.