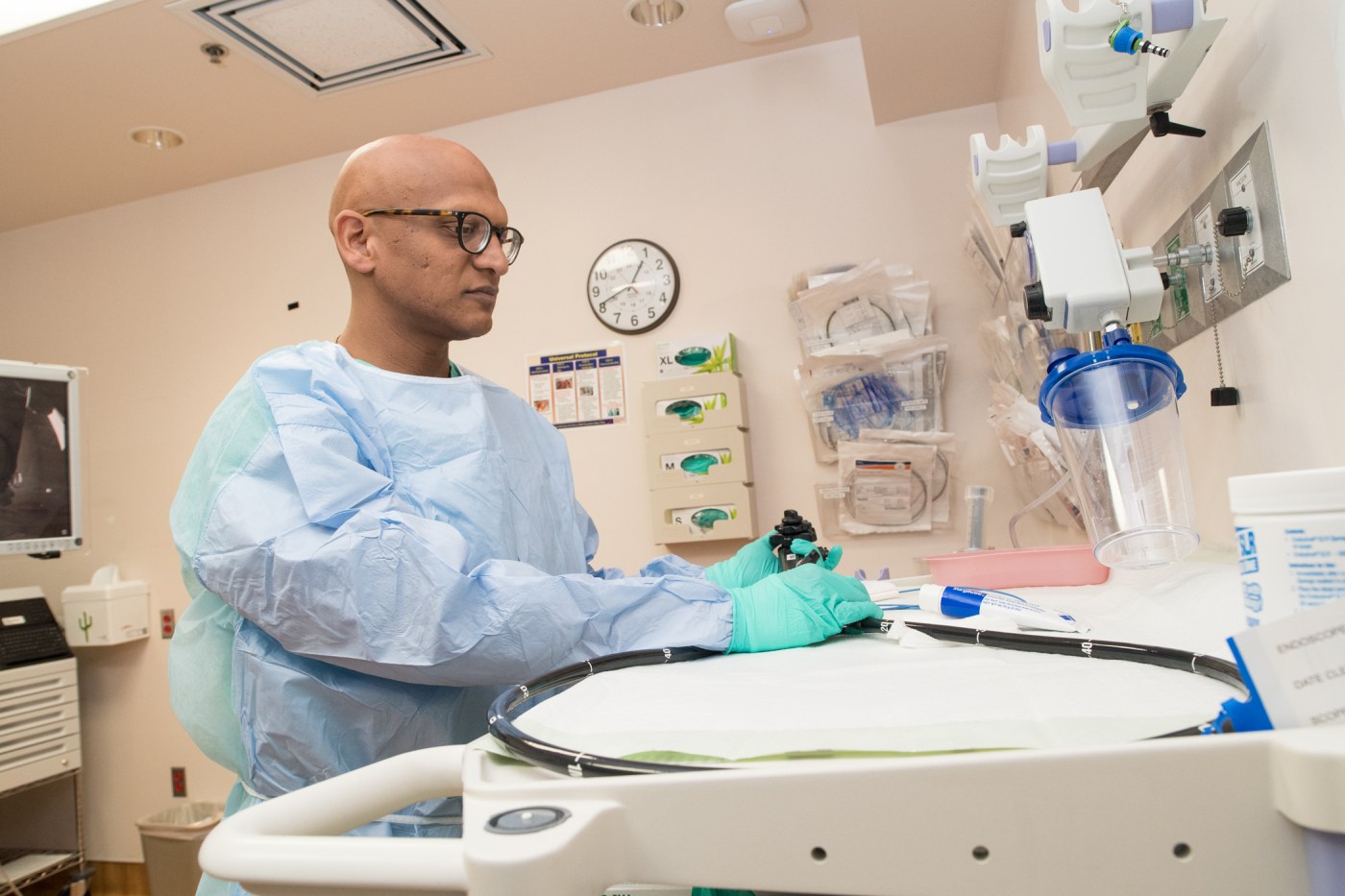 A new VA study finds that delays in undergoing colonoscopy following an abnormal stool test increase the risk of a colorectal cancer diagnosis and cancer-related death.

The results appeared online in the journal Gastroenterology in January 2021.

In a retrospective study of more than 200,000 Veterans, the researchers found that patients who received colonoscopy more than 13 months after an abnormal stool blood test were up to 1.3 times more likely to have colorectal cancer, compared with those who had colonoscopy up to three months after the stool test. Odds of an advanced stage of cancer at diagnosis were up to 1.7 times higher when colonoscopy was delayed beyond 16 months.

The findings also showed the risk of colorectal cancer-related death increased by up to 1.5 times when colonoscopy was delayed more than 19 months.

Dr. Folasade May, a gastroenterologist at the VA Greater Los Angeles Healthcare System, led the study.

The cohort included Veterans who had an abnormal fecal immunochemical test (FIT) or fecal occult blood test (FOBT). Both are common stool blood screening tests that, when abnormal, require a follow-up colonoscopy to evaluate for precancerous and cancerous colorectal growths known as polyps.

Dr. Folasade May, a gastroenterologist at the VA Greater Los Angeles Healthcare System, led the study. In light of the results, she and her team emphasize that improved colorectal cancer outcomes call for colonoscopy within one year of an abnormal stool test, which is when blood is detected after a sample is sent to a lab.

“These findings extend current knowledge about the clinical implications of time to follow-up after abnormal FIT-FOBT,” the researchers write. “Further work should include [efforts] that address barriers to [undergoing] colonoscopy after abnormal non-colonoscopic screening results and policies to encourage the routine monitoring of follow-up rates.”

Colorectal cancer one of most preventable forms of cancer

This is the first study in the United States, the researchers note, to examine the risk of death linked to delays in undergoing a colonoscopy following an abnormal stool blood test.

Excluding skin cancers, colorectal cancer is the third-most common cancer diagnosed in men and women in the U.S. It’s also one of the most preventable forms of cancer. Incidence and death related to colon cancer can be significantly reduced by the detection and removal of pre-cancerous polyps and the cancer itself.

“Currently, there is no national policy or standard for the clinically acceptable time interval between an abnormal FIT-FOBT result and diagnostic colonoscopy,” May and her colleagues write. “Time to colonoscopic follow-up varies widely in practice and across health care settings. A recommended interval that is too long can contribute to polyp progression and stage migration of colorectal cancer, risking the need for more aggressive and morbid treatment, as well as less favorable outcomes.”

Use of stool tests has increased during COVID

The investigators accessed electronic health record data of Veterans who had an abnormal stool test between 1999 and 2010, who had no history of colorectal cancer or inflammatory bowel disease, and who were between 50 and 75 years of age. The cohort, which was mostly male, averaged 61 years of age.

Many health care experts believe that stool tests, such as FIT, are as reliable as colonoscopy in screening for colorectal cancer. “If your doctor tells you a colonoscopy is better, that’s not accurate,” Dr. Alex Krist, chairman of the U.S. Preventive Services Task Force, an independent panel that reviews evidence and issues recommendations, told The New York Times. “The data show the tests are equally effective at saving lives.”

The use of stool tests has increased during the COVID-19 pandemic because of the convenience and safety of home testing and because patients may be reluctant to go to a health care facility for colonoscopy.

`They don’t believe the results’

Dr. Samir Gupta, chief of gastroenterology at the VA San Diego Healthcare System, co-authored the study. Many patients and some primary care providers do not understand the importance of having colonoscopy after an abnormal stool test, he says.

“Some patients and providers even explain these results incorrectly, attributing abnormal results to hemorrhoids, something that was eaten, or other problems,” Gupta says. “They don’t believe the results. The results of this study should raise awareness that delaying colonoscopy after an abnormal stool test can have major consequences, including increased risk for cancer diagnosis, late-stage cancer at diagnosis, and death from colorectal cancer. These findings can also help motivate patients and providers to make sure colonoscopies are completed after an abnormal test.”

The study findings will have even greater implications as more non-invasive tests for colorectal cancer screening come on the market, Gupta adds.

“With stool tests, such as FIT and FIT-DNA, already covered by most insurance companies and with promising new blood-based screening tests for colorectal cancer under study in large trials,” he says, “the challenge of ensuring complete screening, including initial completion and follow through to colonoscopy after an abnormal test, is likely to grow substantially.”

Click here to learn more about VA research on COVID-19.