Home / Employment, VA Careers / VIDEO: Get an inside look at working as a VA psychologist

VIDEO: Get an inside look at working as a VA psychologist 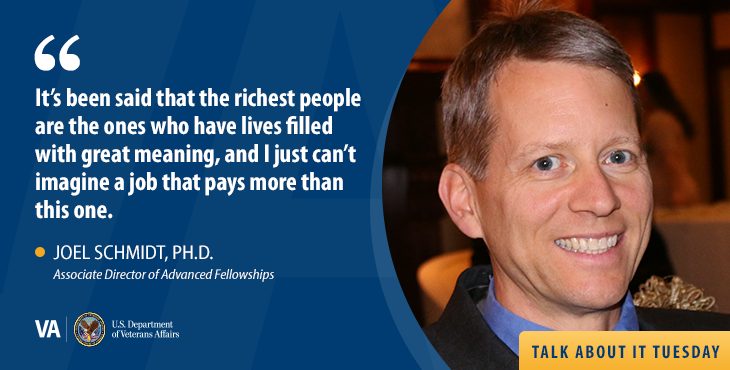 There are a lot of reasons to consider a career as a VA psychologist, but don’t take it from us.

Joel Schmidt, a VA psychologist of nearly three decades who currently serves as associate director of advanced fellowships in the VHA Office of Academic Affiliations, recently appeared to talk about VA psychology careers on Talk About It Tuesday, a live broadcast that airs each Tuesday at noon ET on LinkedIn.

As part of VHA’s 75th anniversary, we are celebrating these vital mental health professionals, one of the most critically needed health care occupations at VA.

First up on Schmidt’s talking points? The rewarding mission of caring for our nation’s brave heroes, a cause that you just can’t find anywhere else.

“It’s been said that the richest people are the ones who have lives filled with great meaning, and I just can’t imagine a job that pays more than this one,” Schmidt said.

Though he’s cared for hundreds, if not thousands, of Veterans, he still remembers one of his very first patients. At the end of their time working together, the Vietnam Veteran thanked Schmidt “in this very sincere way that just took my breath away.”

“It’s just incredibly rewarding to be in a room with somebody like that… this quiet hero who would never think of himself in that way,” Schmidt said.

With their broad training, psychologists are uniquely poised to serve at VA in many capacities, from mentoring and teaching to research and leadership.

“You’re doing a lot of different things, which is what a lot of people really enjoy. The skillset you get as a psychologist really helps to make that successful,” Schmidt said.

Schmidt began his career doing clinical work, including inpatient, outpatient, substance use and general mental health. He was quickly offered opportunities to develop programs and join task forces, and naturally evolved into a leader at VA.

“Every day is different. I always have new problems to solve and new challenges and new rewarding things to take on,” Schmidt said.

We’ve been on the leading edge of mental health care since the end of World War 2, Schmidt said. Though psychology was then in its infancy, we focused on hiring professionals in the developing field. Partnering with the American Psychological Association, we helped develop the psychology accreditation process that is used around the nation today.

Our emphasis on psychology and mental health hasn’t waned. Between 2006 and 2018, we doubled the number of psychologists we employ and are continuing to hire. We also run the largest training program for psychologists in the country, training more than 700 interns and 400 post-doctoral fellows each year.

This large team of mental health professionals are committed, dedicated and compassionate.

“I have had so much good luck in my years in VA at meeting brilliant, kind, sharing, cooperative people who have really helped me along and mentored me,” Schmidt said. “There’s been this pervasive culture of cooperation and sharing.”

If you’re looking for a career that offers plentiful rewards and a variety of opportunities, consider working as a VA psychologist.