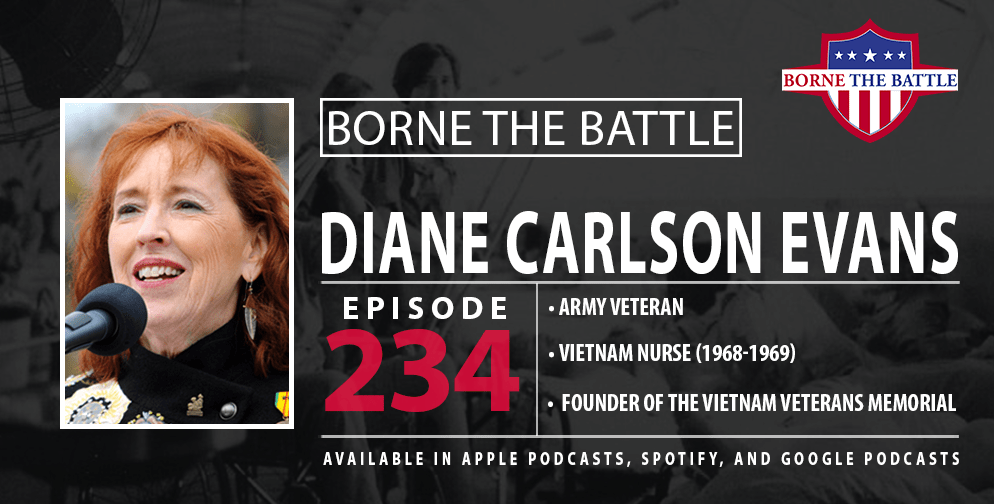 *Looking for answers to your COVID questions? The #VetResources email on 3/24 erroneously linked to this post. The correct link is https://news.va.gov/86196/covid-19-vaccine-questions-answered-need/. Edited 3/25/21.

Army Veteran Diane Carlson Evans, founder of the Vietnam Women’s Memorial Foundation, joined Borne the Battle to discuss her decision to become a nurse, time serving in Vietnam as a combat nurse, decision to re-enlist after working in a civilian hospital and her fight for a women’s memorial on the National Mall.

Growing up on a farm in Minnesota, Evans always knew she wanted to be a nurse. After her second oldest brother was drafted, she had no doubt that she would go to Vietnam herself. So she went to Minneapolis, found an Army Nurse Recruiter and asked how she, too, could go to Vietnam.

Evans enlisted and served in Vietnam from 1968-69 as a trauma nurse in the surgical and burn wards at Vung Tau and later as head nurse in a surgical unit at Pleiku. She treated wounded soldiers and civilians, many of whom came straight from the worst of the fighting.

When she came home, Evans worked in a civilian hospital for three weeks. She wasn’t allowed to do many of the procedures that had been part of her everyday duties in Vietnam and she felt stifled. She left the position when she realized she wasn’t suited to work with those who couldn’t understand her experience.

In 1984, Evans incorporated the Vietnam Women’s Memorial Project as a non-profit organization after visiting the Vietnam War Memorial and realizing that women weren’t visible. In fact, there weren’t any memorials for women Veterans in the nation’s capital and, when she brought it up, faced great opposition from those who felt the idea was misguided and unnecessary. It then became her goal to bring visibility to the service and sacrifice of the women who served in Vietnam.

After nearly 10 years of Congressional and federal hearings, the project gained enough support to receive approval for a statue. On November 11, 1993, the Vietnam Women’s Memorial was dedicated as part of the larger Vietnam War Memorial.

Photo of the Vietnam Women’s Memorial in Washington, DC. Photo courtesy of Kalacaw.

Today, the Vietnam Women’s Memorial Foundation continues to identify the women who served, document their needs, and facilitate research to address those needs and to educate visitors about the service of women during the Vietnam War.

In this episode, Evans shares:

Mentioned in this Episode:

Jana Jenkins is a podcast intern with VA’s Digital Media Engagement team. She is an undergraduate student at the College of Saint Benedict studying Communication.