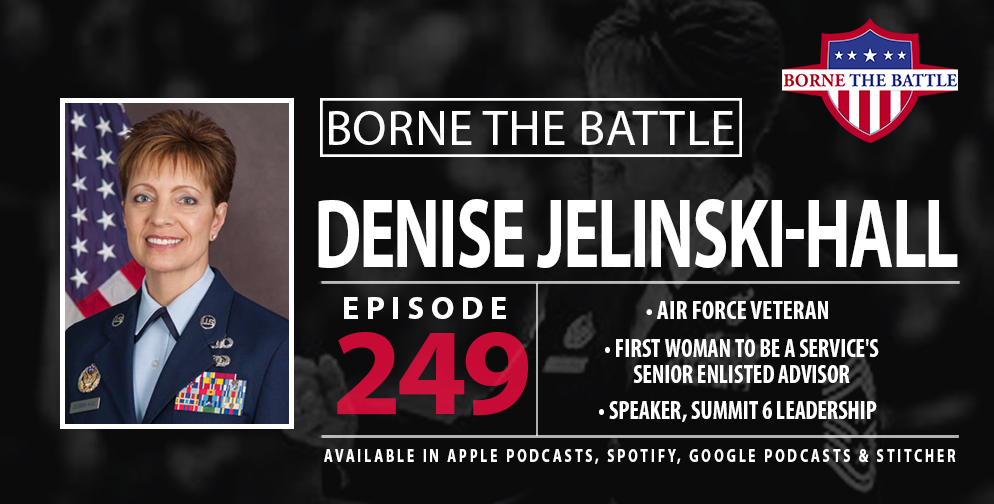 Denise Jelinski-Hall felt stuck in her small hometown of Little Falls, Minnesota, so she created a new future for herself by joining the Air Force. Years, later, Jelinski-Hall became the highest-ranking enlisted female – at the time – in United States military history.

On this episode of Borne the Battle, Air National Guard Veteran Denise Jelinski-Hall discusses her selection as Senior Enlisted Advisor to the Chief of the National Guard Bureau, the changing roles of women in the military, and how “gray-area service members” are still entitled to VA benefits.

Upon her retirement, Denise Jelinski-Hall participates in the swearing-in ceremony for her replacement, Chief Master Sgt. Mitch Brush, as Senior Enlisted Advisor to the Chief of the National Guard Bureau. Photo Courtesy of the Minnesota National Guard.

In addition to her military service, Jelinski-Hall volunteers with United Through Reading and the Military Child Education Coalition. United Through Reading connects military families through recorded stories. Family members can record themselves reading and the recordings provide story time with that absent family member. Jelinski-Hall served on the board of the Military Child Education Coalition, an organization that supports the schooling of military children through mentorship and other supportive resources.

Jelinski-Hall is currently a military advisor for Veterans United Home Loans, where she educates Veterans about VA home loans and home ownership. She also wrote an autobiography, “From the Prairie to the Pentagon,” and contributed to the leadership book “Breaching the Summit,” alongside five other former Senior Enlisted Advisors.

In this episode, Jelinski-Hall discusses writing her autobiography, how to respectfully not take ‘no’ for an answer, and other leadership and life tips.

Mentioned in this episode:

Jana Jenkins is a podcast intern with VA’s Digital Media Engagement team. She is a recent graduate of the College of Saint Benedict with a bachelor’s degree in Communication.