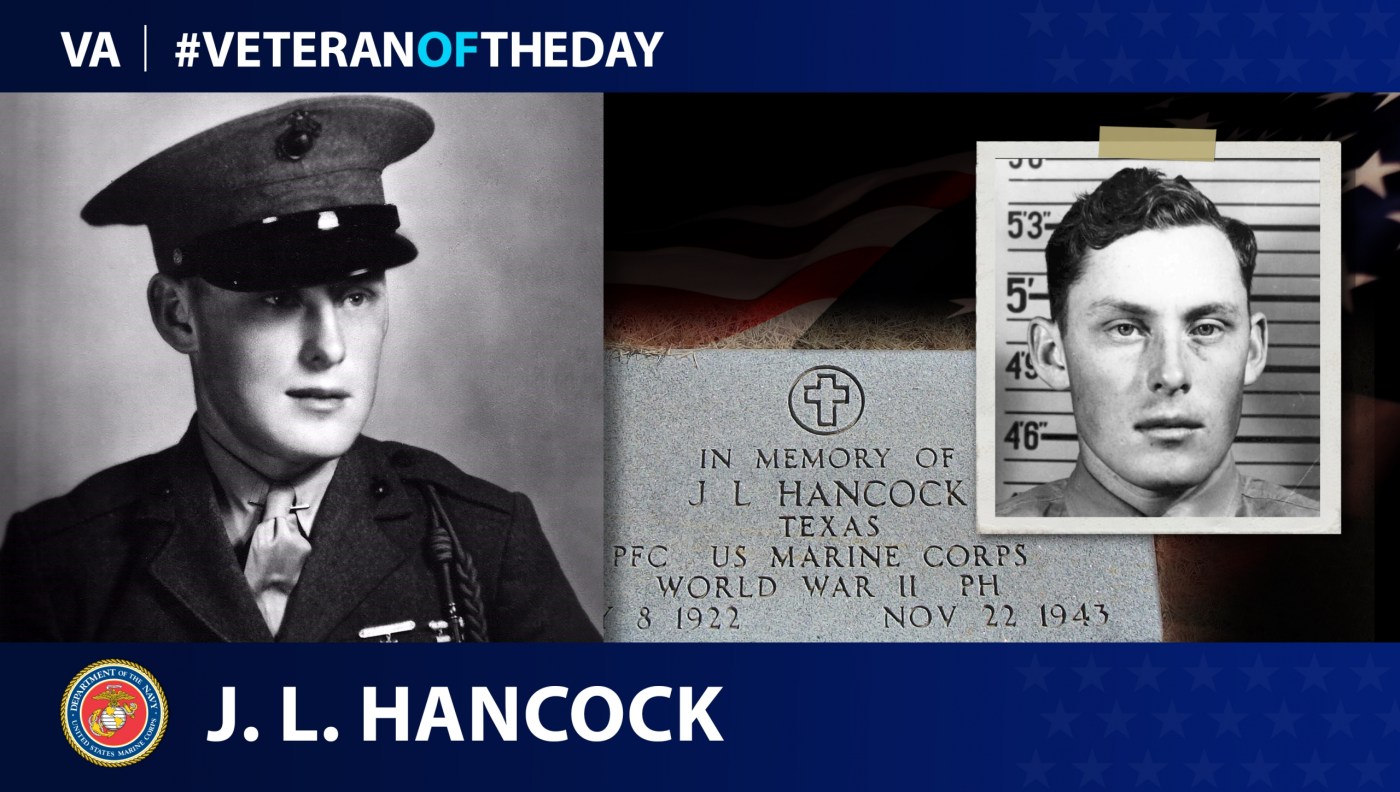 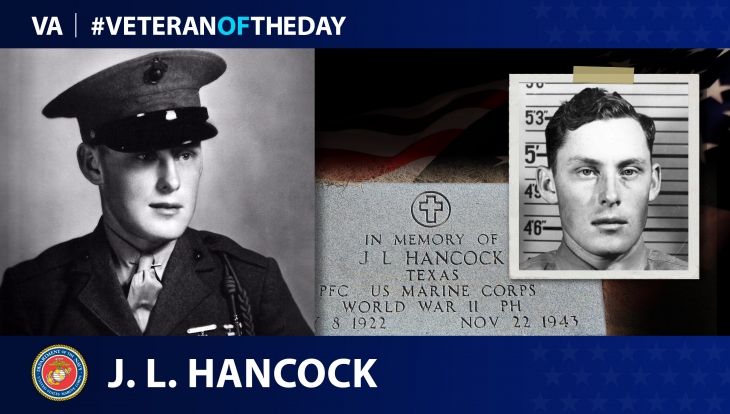 Born in May 1922, J.L. “Jay” Hancock grew up with his parents and four siblings in McLean, Texas. He graduated from McLean High School in 1940.

After the Pearl Harbor attack, 19-year-old Hancock enlisted in the Marine Corps on Feb. 17, 1942. He went to basic training at Camp Elliott in San Diego, California.

That fall, Hancock deployed to the South Pacific for advanced combat training and joined Company B, 1st Battalion, 6th Marines, 2nd Marine Division. His unit fought enemy forces at Guadalcanal in the Solomon Islands in late 1942. They occupied the island for a few months before returning to Wellington, New Zealand, for rest and relaxation. Hancock spent his first days of R&R being treated for malaria before recovering.

Hancock’s next assignment was in Tarawa, which the Japanese had occupied for two years. The Japanese had built an airstrip on Betio, an islet in Tarawa. Guarding the island were 4,500 Japanese troops, aided by 500 reinforced concrete pillboxes, machine gun nests and large artillery. As part of Operation Galvanic, the Marines received orders to secure the small, yet fortified island.

Marine troops invaded on Nov. 20, 1943, swimming over a mile to shore. The next day, Hancock’s regiment landed on the island and encountered strong resistance, resulting in heavy fighting.

On Nov. 22, 1943, while defending a group of men in a nearby foxhole, artillery shrapnel killed Hancock. Marines buried him alongside others who also fell during battle in Row D of Cemetery 33, one of the cemeteries on Betio. Their graves were marked and recorded.

The Battle of Tarawa was one of the bloodiest battles in the Pacific during World War II, resulting in the deaths of 1,026 Marines and sailors and wounding over 2,500 soldiers. Despite heavy causalities, the battle’s military success was a huge victory for the U.S. and solidified a platform to launch assaults on the Marshall and Caroline Islands to advance their Central Pacific Campaign against Japan.

In 1946 and 1947, the U.S. Army 604th Quartermaster Graves Registration Company failed to locate about half of the known casualties’ remains and deemed their bodies “unrecoverable.”

Hancock’s name is among those memorialized on the Walls of the Missing at the Manila American Cemetery in the Philippines. His parents accepted his awards including a Purple Heart, a Combat Action Ribbon, a World War II Victory Medal, an American Campaign Medal and a Presidential Unit Citation on his behalf.

In 2015, a non-profit organization, History Flight, began working with the Department of Defense to locate the remaining fallen soldiers from Tarawa. In March 2019, they located a burial trench west of Cemetery 33. The Defense Prisoner of War/Missing in Action Accounting Agency successfully identified the remains of Hancock Feb. 17, 2021, through DNA matches. On Aug. 4, 2021, Hancock was finally laid to rest in McLean, Texas, where his family had placed a memorial marker years prior.

At present, more than 81,700 Americans remain missing from World War II, the Korean War, the Vietnam War, the Cold War, the Gulf Wars and other conflicts.