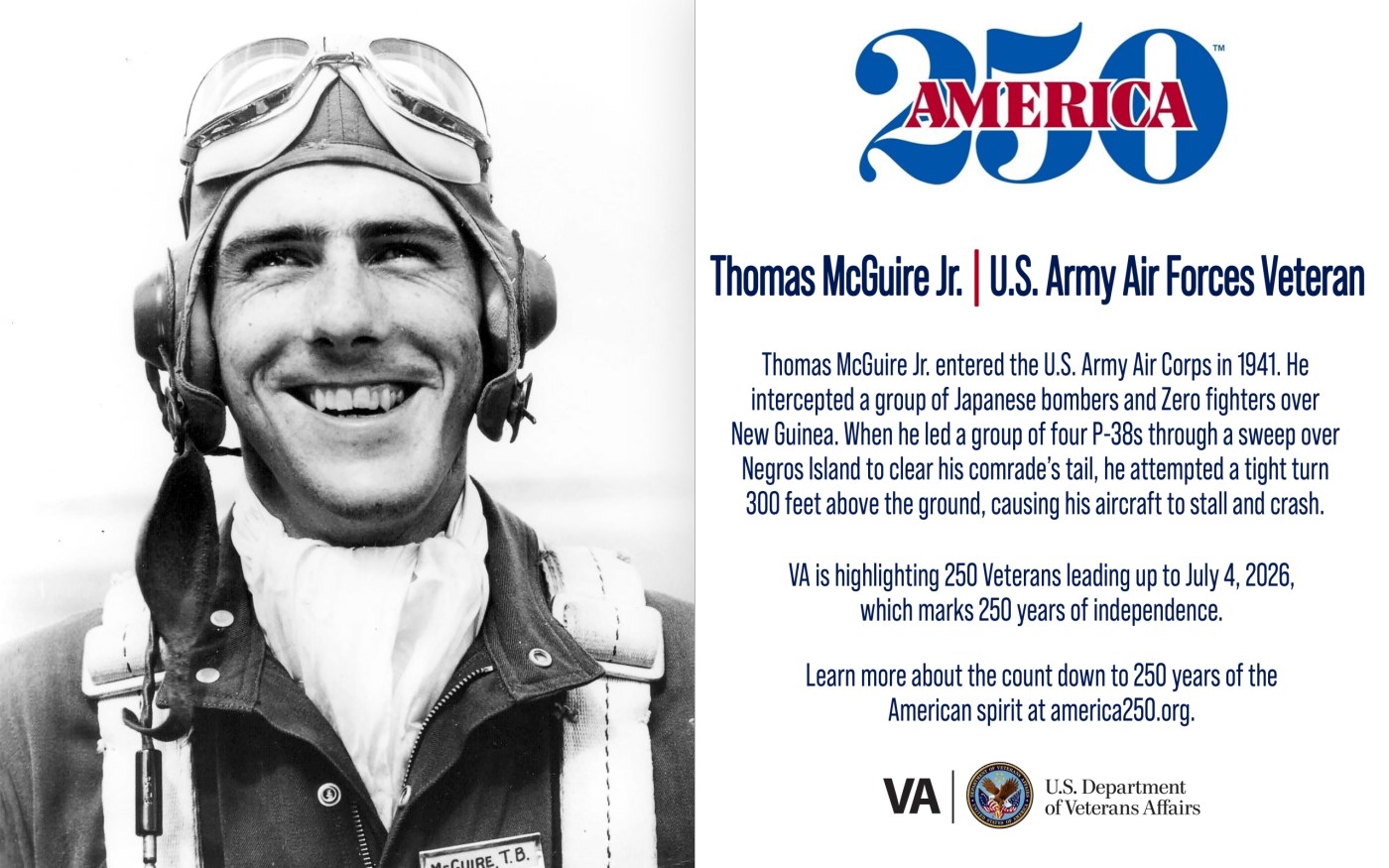 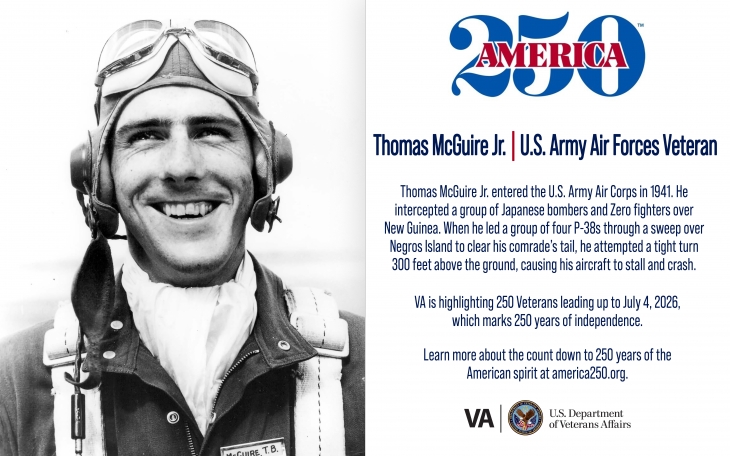 After graduating from high school in 1938, Thomas McGuire Jr. enrolled in the Georgia Institute of Technology to study aeronautical engineering. He later decided to apply for the U.S. Army Air Corps Aviation Cadet Program in July 1941. Following flight school at Corsicana, Texas, McGuire earned his pilot wings at Kelly Field, Texas, and in June 1942. He served with the 54th Fighter Group in the Aleutian Islands near Alaska, where he flew patrol flights.

In July 1943, McGuire transferred to the Pacific and joined the 431st Fighter Squadron as part of the 475th Fighter Group. On Aug. 18, 1943, McGuire served as part of a group flying top cover for bombers striking at Wewak, New Guinea, when they ran into enemy aircraft. During the ensuing battle, McGuire shot down three enemy aircraft and an additional two more the next day. The numbers he achieved during battle made him an ace pilot. By the end of August 1943, he had scored seven aerial victories, received a Silver Star and received three Distinguished Flying Crosses.

McGuire continued to lead missions and win many victories in battle. In October, he nearly lost his life on a mission over Oro Bay in which he downed three enemy aircraft but was forced to bail out of his own aircraft after it was severely damaged. For this mission, he received the Purple Heart and Silver Star. On Dec. 26, 1943, he led a flight that destroyed 10 dive bombers and three fighters. He received a fourth Distinguished Flying Cross for the mission.

After becoming the commander of the 431st Fighter Squadron in the spring of 1944, McGuire promoted to major. He continued to lead missions, coming close to matching Maj. Richard Bong’s record of 40 aerial victories. In December 1944, McGuire led a squadron on a two-day mission covering U.S. bombers attacking a Japanese airdrome in the Philippines.

According to his Medal of Honor citation, “In the ensuing action he repeatedly flew to the aid of embattled comrades, driving off enemy assaults while himself under attack and at times outnumbered three to one, and even after his guns jammed, continuing the fight by forcing a hostile plane into his wingman’s line of fire. Before he started back to his base, he had shot down three Zeros. The next day he again volunteered to lead escort fighters on a mission to strongly defended Clark Field…In rapid succession he shot down one aircraft, parried the attack of four enemy fighters, one of which he shot down, single-handedly engaged three more Japanese, destroying one, and then shot down still another, his 38th victory in aerial combat.”

In early January 1945, McGuire volunteered to lead a fighter sweep of four P-38s over the Japanese airstrip of Fabrica on Negros Island in the Philippines. During this mission, McGuire’s group encountered Japanese aircraft and engaged them in combat. McGuire’s airplane stalled and crashed on Negros, killing him in action.

McGuire was posthumously awarded the Medal of Honor in March 1946 for his actions in the December 1944 mission. His remains were returned to the U.S. in 1949, and he was buried with full honors at Arlington National Cemetery. McGuire received many honors, including the Distinguished Service Cross, three Silver Stars, six Distinguished Flying Crosses and 15 Air Medals.