The Immigrant Military Members and Veterans Initiative, and how VA supports immigrant Veterans 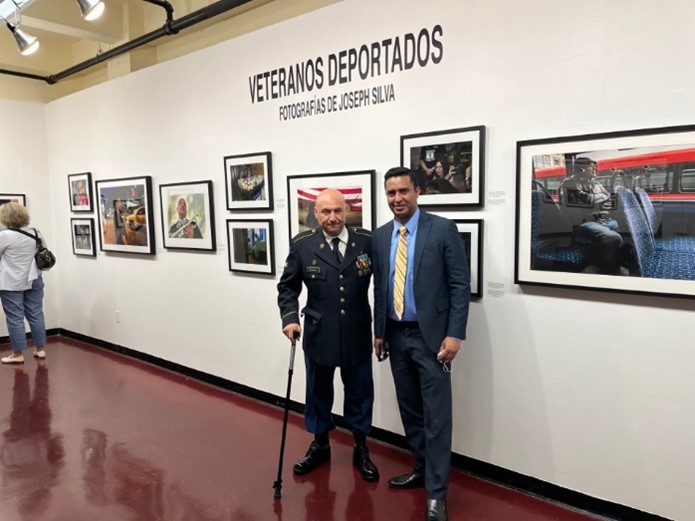 The Immigrant Military Members and Veterans Initiative (IMMVI) launched in July 2021 when VA partnered with the Department of Homeland Security to consolidate relevant federal resources for noncitizen service members, Veterans and their families, caregivers and survivors. The Initiative also launched a portal for Veterans who need assistance in applying to return to the United States and for accessing VA benefits to which they may be entitled.

When The Immigrant Military Members and Veterans Initiative launched, VA Secretary Denis McDonough said that “It’s our responsibility to serve all Veterans as well as they have served us – no matter who they are, where they are from, or the status of their citizenship. Keeping that promise means ensuring that noncitizen service members, Veterans and their families are guaranteed a place in the country they swore an oath – and in many cases fought – to defend. We at VA are proud to work alongside DHS as to make that happen.”

Since launch, our VA team has done just that.

Late last month, as the VA lead for IMMVI, I joined the DHS team to visit deported Veterans, stakeholders and recently repatriated Veterans to promote the new online tools that would help them. The trip included stops in California, Texas, and Tijuana, Mexico.

While in Tijuana, I met with deported Veterans in-person to highlight how they can obtain the VA benefits they earned through their American military service. In El Paso, Texas, we were hosted by the League of United Latin American Citizens, American GI Forum and Repatriate Our Patriots. Deported Veterans from around the world joined this discussion via Zoom. At the other locations, our meetings encouraged local bar association attorneys to provide pro-bono legal services in the immigration practice area to deported Veterans. And in Los Angeles and San Diego, we met with U.S. Rep. Nanette Diaz Barragán, Los Angeles County Supervisor Hilda L. Solis and San Diego County Supervisor Nathan Fletcher to highlight the importance of local collaboration.

Who is eligible for benefits?

All eligible Veterans are entitled to VA benefits regardless of their immigrant status. The same applies to those who live abroad.

Unfortunately, identifying these Veterans – especially deported Veterans – has been challenging. VA has worked closely with LULAC, Repatriate our Patriots, American GI Forum and the American Legion for assistance, and with DHS to identify Veterans who have been deported and those who have been repatriated.

Last year, VA collaborated with DHS to organize vaccination clinics at the San Ysidro and the Bridge of the Americas Ports of Entry to vaccinate deported Veterans, their families and caregivers. The VA medical centers in San Diego and El Paso provided support for the clinics, and the VBA team counseled those who attended on VA’s non-health benefits.

At the San Ysidro Port of Entry, I was joined by Dr. Rob Smith, the San Diego VA Medical Center director, for a tour of the Port of Entry. Later, in Mexico, we met with several deported Veterans and their families, and put them in touch with VBA staff for benefits assistance, as well as informing them what Initiative is doing to assist with their return home.

Meeting with deported Veterans and their families in Tijuana, Mexico.

This month, VA announced two agency actions to assist formerly incarcerated Veterans with reintegration as part of Second Chance Month. VA will expand the use of a Veterans Reentry Search Service, a free web-based tool that criminal justice partners and prison and jail staff can use to identify incarcerated Veterans. This will allow VA to identify and expand outreach to these Veterans, and then connect them to needed VA services. VA will also collaborate closely with the Social Security Administration and the Federal Bureau of Prisons to facilitate data exchange that will result in faster restoration of VA benefits after release from incarceration.

As a part of a congressional reporting requirement, VA is also conducting an internal review of its policies and practices to ensure that it is not engaging in any policies that put our Veterans or others at risk for deportations and, if any are identified, allows it to implement corrections. This includes a review of mutual support agreements with federal, state and local law enforcement agencies that may put our Veterans at risk for deportation.

Lastly, VA is working to close the gap on the front end to prevent future deportations. Our Veterans were deported because they did not naturalize, so VA is expanding targeted outreach efforts to promote naturalization and to reach transitioning non-citizen service members as they come into the VA system.

As a Veteran who naturalized while mobilizing to serve in Iraq, I know firsthand the value of the work that VA and our partners do to support our nation’s immigrant Veterans. Our work is not yet done, but our VA team continues to do all we can until all our brother and sister Veterans have returned home.

By Saif Khan is an Iraq War Veteran, and a special assistant and attorney for VA's Office of the General Counsel