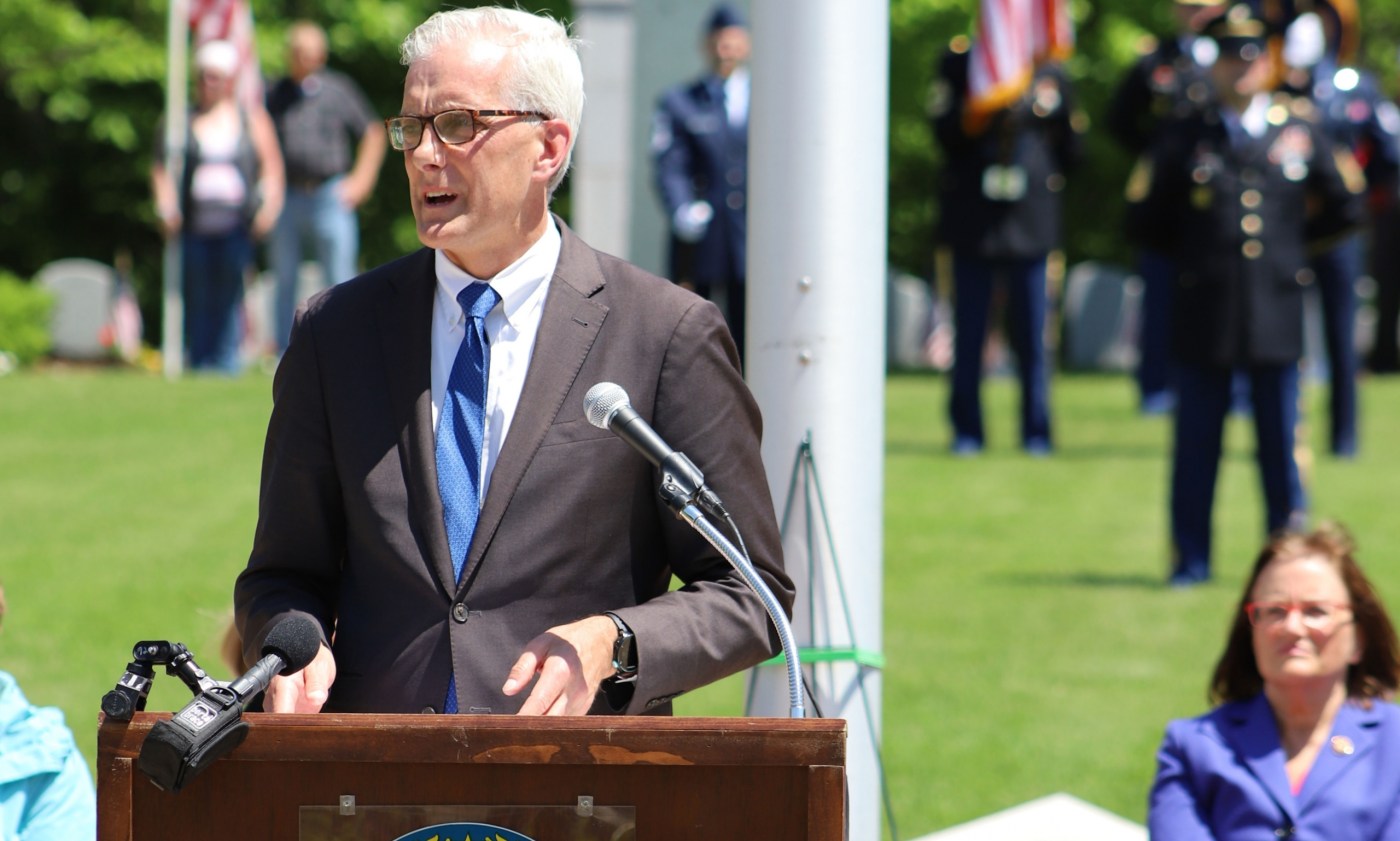 While visiting the Buck, New Hampshire State Veterans Cemetery yesterday, Secretary Denis R. McDonough recalled the story of a Marine that exemplifies what Memorial Day is all about.

You can read about Marine Corporal Michael Ouellette’s bravery and leadership under fire in the Secretary’s remarks below or hear his words spoken during the ceremony in the New Hampshire State Veterans Cemetery Facebook video.

Thank you, Shawn [Buck, NH State Veterans Cemetery Director], for that kind introduction. I would rave about what an amazing job you and your team do here, making this cemetery a beautiful resting place for those who served and their families – but, well, look around. I can’t say it any better than you all can see it.

My thanks as well to everyone who came out today and helped make this event possible: Governor Sununu; Adjutant General Mikolaities’; Senators Hassan and Shaheen; Representatives Kuster and Pappas; everyone from the Marine Corps League and the New Hampshire National Guard; the 39th Army Band; the amazing kids from Penacook Elementary… I could go on and on. Thank you for helping make this day special.

Most of all, thank you to the Veterans, service members, families, caregivers and survivors who have joined us on this Memorial Day.

We are, all of us, forever in your debt.

You know, I’ve been thinking a lot about what this day, this place, this moment – what it’s all about… what Memorial Day is all about. And I keep coming back to the story of one man: Corporal Michael Ouellette. I’d like to share his story with you now, if you don’t mind.

Mike – as his family calls him – was a proud son of Manchester, New Hampshire, and a Marine who deployed to Afghanistan as a part of Operation Enduring Freedom.

On May 22, 2009, Mike was leading his Marines on a foot patrol when an Improvised Explosive Device – or IED – exploded underneath him, badly severing his left leg and sending shrapnel through his body.

Then, somehow, the situation got even worse: the enemy moved in, launching a brutal attack on Mike and his squad.

But instead of doing what most anyone would do in that situation – getting out of there and getting medical assistance as soon as possible – Mike stayed put. He stayed in control. He tied on his own tourniquet. He called in air support. He continued to direct his Marines in battle. And he refused to be removed from the battlefield until after his men were off to safety.

After a long period of intense fighting, Mike’s squad finally thwarted the enemy attack – thanks largely to Mike’s leadership – and began to move out.

Only then did Mike allow himself to be loaded into a medical evacuation chopper. Not too much later – having saved the lives of all of his men but one – Mike died of his wounds. His last words as the chopper took him away were, “I’m proud of my Marines.”

Mike was just 28 years old, and he’s buried right here – over by that Gazebo.

And look, I tell Mike’s story today not only because it’s heroic – though it is, of course. I tell it because Mike’s story is emblematic of every Veteran and service member buried here and in places like this across America – all of whom should be recognized today.

Mike’s story is emblematic of so many other service members who have been killed in action – giving what President Lincoln called “the last full measure of devotion” – from the American Revolution to today.

It’s emblematic of those service members who are still missing in action, many years after their conflicts ended.

And it’s emblematic of those Veterans who served, sacrificed, and came home – then passed away years later, having earned a lasting resting place in a cemetery like this.

They are, all of them, heroes. They all have a story worth telling. And it’s on us to tell their stories, to honor their lives, to provide them a lasting resting place befitting their service, and to offer their families and loved ones our eternal support.

Now, of course, there’s nothing we can do to bring back the dead – or to make the loss we feel in their absence any less painful. But we got a chance to speak with Michael Ouellette’s family this week, and they really put into perspective what we can do on days like this.

We talked to Mike’s brother, Alan, who is here today with his wife, Lauren, and his son, James Michael. And we talked to Mike’s sister, Stephanie, who has dedicated her life to serving Veterans and grieving families since Mike passed away. And here’s what they said:

“Anyone who has truly loved someone knows that they may pass away, but they are never really gone. If we talk about them, and we share their lives with other people, they are always with us.”

“They are always with us.”

So, no, there’s nothing we can do bring back the dead. But, like Stephanie and Alan said so beautifully, we can keep those we love with us – always – by sharing their stories and their lives. By remembering them. And by doing what we can to serve them in death, just like they served us in life.

That’s our job as Americans – on Memorial Day, and every day. And I’m so proud to be here with you today to do it.

So, after we finish up here, I encourage you to walk around this cemetery; to learn more about the heroes who are buried here; to post a tribute to them online at the Veterans Legacy Memorial at VA.gov/remember; or to dedicate yourself to serving survivors, and Veterans, in ways big or small.

Because they deserve our very best, and we should never give them anything less. And because, by doing those small things, we can keep heroes like Corporal Michael Ouellette with us – always – in our hearts, and in our minds.

May God bless you – and our nation’s Veterans, service members, families, caregivers and survivors. And may God rest our fallen heroes.