NASDVA is the second-largest provider of services to Veterans 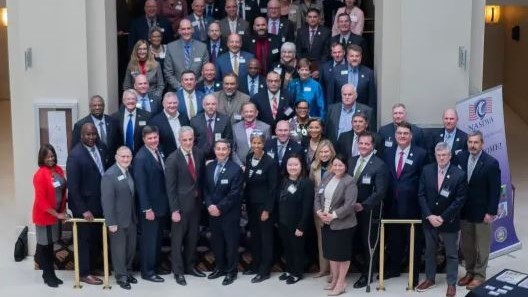 Did you know that state agencies devoted strictly to Veterans’ affairs work to provide critical benefits and services to those who have served?

Those agencies belong to the National Association of State Directors of Veterans Affairs (NASDVA), which represents all 50 states, Washington, D.C., and five U.S. territories: American Samoa, Guam, the Northern Mariana Islands, Puerto Rico, and the Virgin Islands. NASDVA is the second-largest provider of services to Veterans, contributing more than $8 billion annually in benefits to Veterans and their families.

`The bonds of honorable service’

State directors as leaders of government agencies are tasked by their governors, state boards and-or commissions to address Veterans’ needs regardless of age, gender, era of service, military branch or circumstance of service.

“We’re connected by the bonds of honorable service, and we’re united by our common goal to make a positive difference in the lives of all Veterans,” NASDVA Senior Vice President Wanda Wright told VA’s Veterans Experience Office.

NASDVA was established in 1946. In the aftermath of World War II, many Veterans earned state and federal benefits that required coordinated efforts to ensure receipt of these entitlements. Thus, states developed a department or agency specifically to manage Veterans’ affairs and carry out the responsibility for Veteran services and programming.

“NASDVA has been around a long time, and it helped establish after World War II many of the Veteran benefits that we have today,” said Wright, a decorated Air Force Veteran. “Our role continues to expand as we go forward [and] as VA continues to expand with all this new legislation coming forth.”

Each of NASDVA’s state agencies do it differently

Wright, the director of the Arizona Department of Veterans’ Services, notes that the type of programs and services NASDVA agencies offer depends mainly on laws passed by their respective state legislatures. Arizona, for instance, has the Veteran Tool Kit Program, which provides up to $750 in financial aid to unemployed Veterans to buy supplies needed to start work in any industry. The aid may be used for tools, uniforms, car repair or other items.

“So if they’re missing things to begin that first day at work, we can provide them bus passes, uniforms, that first nice outfit for their work,” Wright said. “They can show up at work feeling confident and secure that they’re in the right place with the right tools to get that job going.”

Arizona also runs the Be Connected program. The social service initiative offers thousands of resources for Veterans, service members and their families and caregivers to find help for everything from suicide prevention and substance abuse treatment, all the way to securing a place to keep their pet while undergoing medical assistance.

Veterans can find their state agencies for Veteran affairs and learn about their services and benefits by going to the NASDVA website. Those interested can also Google the state Veteran affairs office in their respective state.

Communications assistant on detail with the Veterans Experience Office