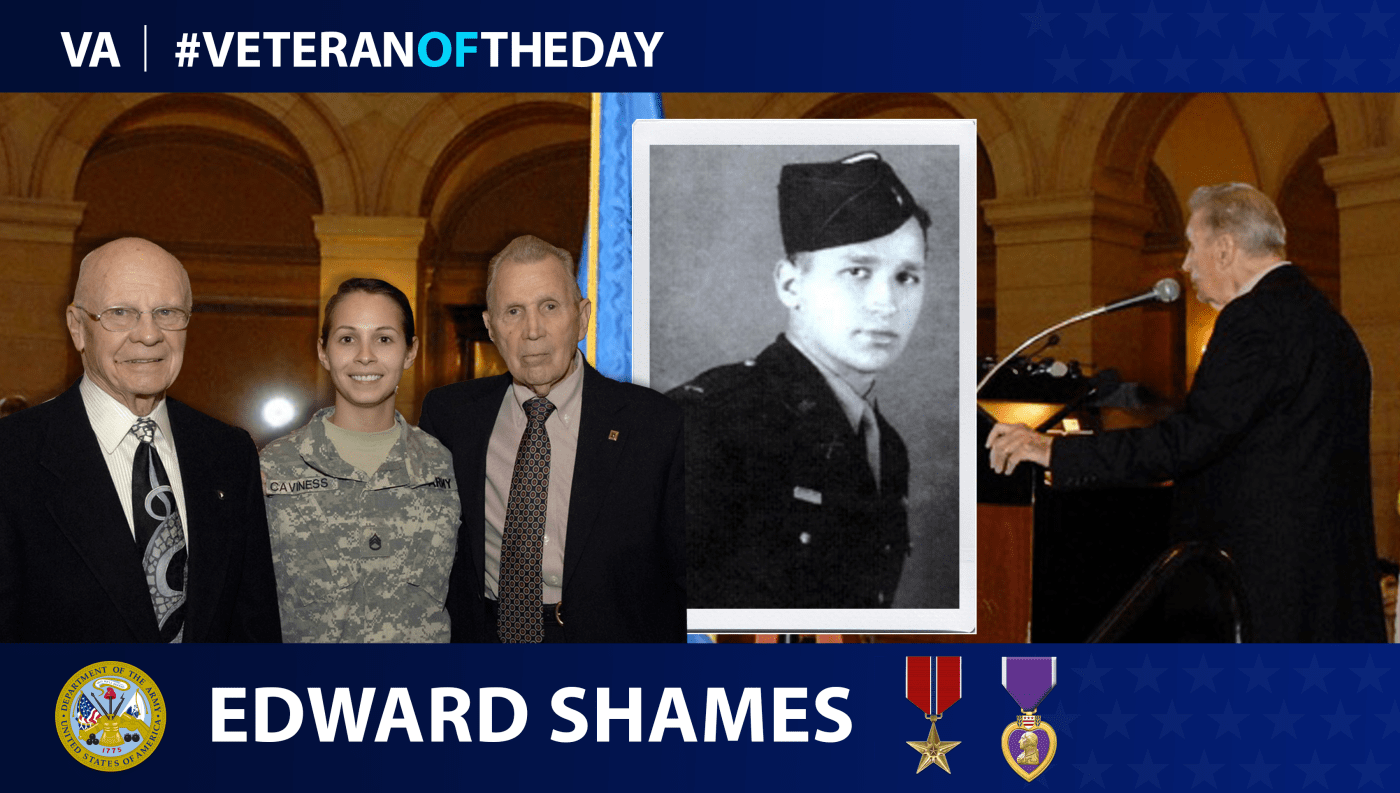 Today’s #VeteranOfTheDay is Army Veteran Edward David Shames, who served as a paratrooper during World War II and was a member of the famed Easy Company.

Edward David Shames was born in Norfolk, Virginia, in June 1922. He was the youngest of four siblings, and were the children of Russian immigrants; Shames’ father, a grocer, died in 1927, when the boy was just five years old.

Shames joined the Army in 1942 during World War II and volunteered for service as a paratrooper. He entered the Army at Fort Lee in Virginia before being sent to Camp Toccoa in Georgia for basic training for paratroopers. Later, he was assigned to I Company, 3rd Battalion, 506th Parachute Infantry Regiment, 101st Airborne Division (the “Screaming Eagles”). Following additional training at Fort Benning in Georgia and Camp Mackall in North Carolina, he deployed to England in 1943. He was promoted to staff sergeant and helped prepare other troops in the 3rd Battalion for the Allied invasion of Normandy the following year.

Shames’ first combat drop took place on D-Day, June 6, 1944, as part of Operation Overlord. He and the others in his unit became lost after landing behind enemy lines in France.

After regrouping with his unit, Shames asked a local farmer for directions. The two men could not understand each other—the farmer did not speak English, and Shames did not speak French—but with the aid of a map, he determined that he and his men had landed in the town of Carentan, a few miles from their intended destination. Upon arriving there, he was awarded a battlefield commission to second lieutenant for his resourcefulness. It was his 22nd birthday.

After his commission, Shames transferred to E Company (“Easy Company”). As a member of Easy Company, he took part in Operation Market Garden, Operation Pegasus and the Battle of the Bulge. He was also the first member of the 101st Airborne Division to enter the Dachau concentration camp in Germany, days after its liberation.

“The stench and horror of that place will live with me as long as I live,” Shames wrote. “Now, 70 years later, I’d like to tell you more, but it’s buried so deep in my soul that I don’t think the rest of the story can ever come out.”

After Germany surrendered, Easy Company reached Eagle’s Nest, Adolf Hitler’s private retreat in the German mountains. Shames located several bottles of cognac labeled “for the Fuhrer’s use only.” He took two bottles for himself—one was a gift for his regiment commander, and the other he used to toast his oldest son’s bar mitzvah.

After the war, Shames worked for the National Security Agency and also served in the Army Reserve, later retiring from the military at the rank of colonel. He was the recipient of a Bronze Star and three Purple Heart medals.

In 1992, historian Stephen Ambrose published the book “Band of Brothers,” which detailed Easy Company’s exploits during the war. The book was later adapted into a television series for HBO, in which Shames was portrayed by actor Joseph May.