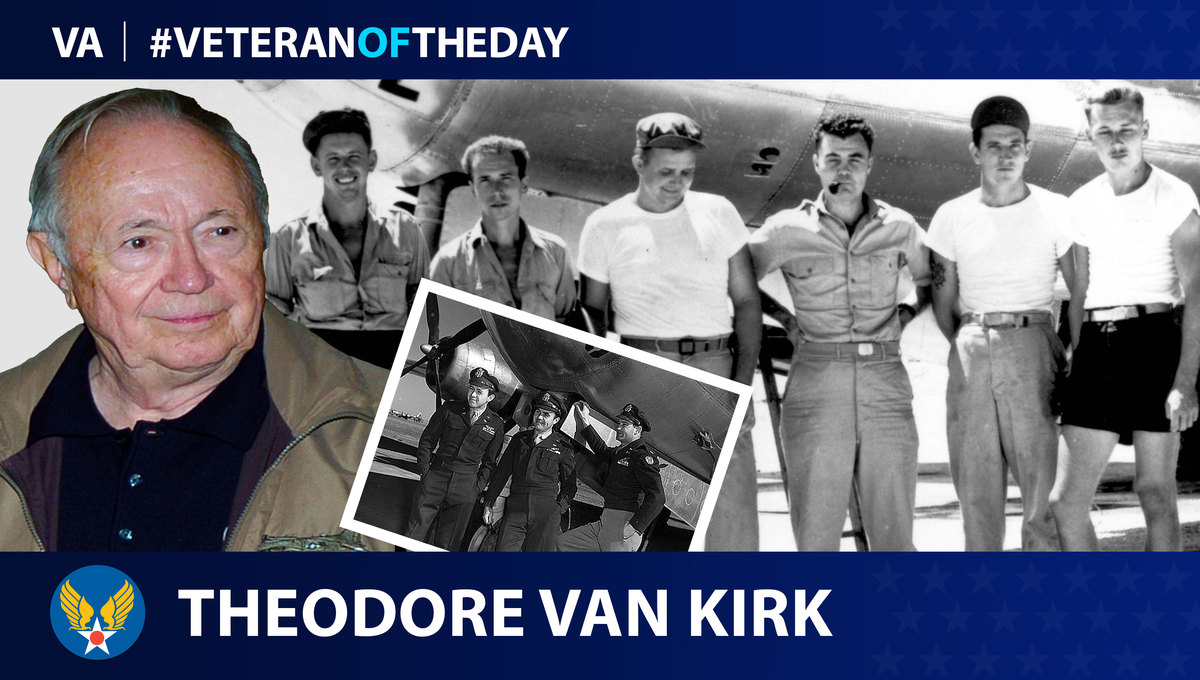 Theodore “Dutch” Van Kirk was born in February 1921 in Northumberland, Pennsylvania. Growing up, he helped his father with his coal business, moving coal flats up and down the Susquehanna River. When it became clear to Van Kirk that the U.S. would be entering World War II, however, he decided that he “would rather fly than walk around in the mud.” He thus left college after a year and joined the military, leaving for Sikeston, Missouri, to attend primary flying school.

During the last days of flying school, Van Kirk failed his flying exam. Though he consequently planned to join the Royal Air Force, a captain advised him to instead attend navigation school. Heeding this advice, he completed his training shortly after the attack on Pearl Harbor and was stationed in Sarasota, Florida, with the 97th Bomb Group before leaving for England. While stationed there, he flew Gen. Mark Clark to Gibraltar during the moderately successful attempt to persuade the French—who were still hostile to the Americans—to refrain from resisting the U.S. Invasion of North Africa. Van Kirk later flew Gen. Eisenhower to Gibraltar to lead this invasion and then again flew Gen. Clark to Algiers. While in North Africa, he also took part in the bombing of Bizerte, Tunisia.

Back in the U.S., Van Kirk was stationed in Monroe, Louisiana, as a squadron commander. While there, he received a request from Col. Paul Tibbets, with whom Van Kirk had served in England, to be group navigator for the 509th Composite Group, which Tibbets commanded and was formed to execute the atomic bombing of Japan. Training for this mission at Wendover Airfield, Utah, the primary concern for Van Kirk and his fellow service members was “not […] Japanese defenses” but rather “the [nuclear] bomb blowing up the airplane.” Aiming to be nine miles away by the time of the explosion, they planned to substitute the B-29 aircraft that they regularly used with B-29s lacking devices such as the turrets, allowing them to fly away at greater speeds. In addition to addressing getaway concerns, the crew also trained in Batista Field, Cuba, prior to the mission.

On August 6, 1945, Van Kirk helped ensure the timely arrival of the Enola Gay, the B-29 that dropped the atomic bomb, to its target. Describing the execution and outcome of the mission, Van Kirk stated that it was “very easy […] everything went exactly according to plan.” Despite the destruction caused, Van Kirk explains that “the bomb really saved lives because the destruction that would’ve been caused in Japan otherwise would’ve been tremendous.”

After his service in World War II, Van Kirk was awarded the Silver Star, Distinguished Flying Cross and 15 Air Medals. He retired from the military as a major and enrolled in Bucknell University in Pennsylvania, earning both a Bachelor’s Degree and a Master’s Degree in Chemical Engineering. He then worked for DuPont, a chemical company.

Van Kirk was twice married, first married to Mary Jane Young, who died in 1975, and then to Imogene Cumbie Guest, who died in 2012. He also had two daughters: Vicki Triplett and Joanne Gotelli; two sons: Thomas and Larry; seven grandchildren and two great-grandchildren.