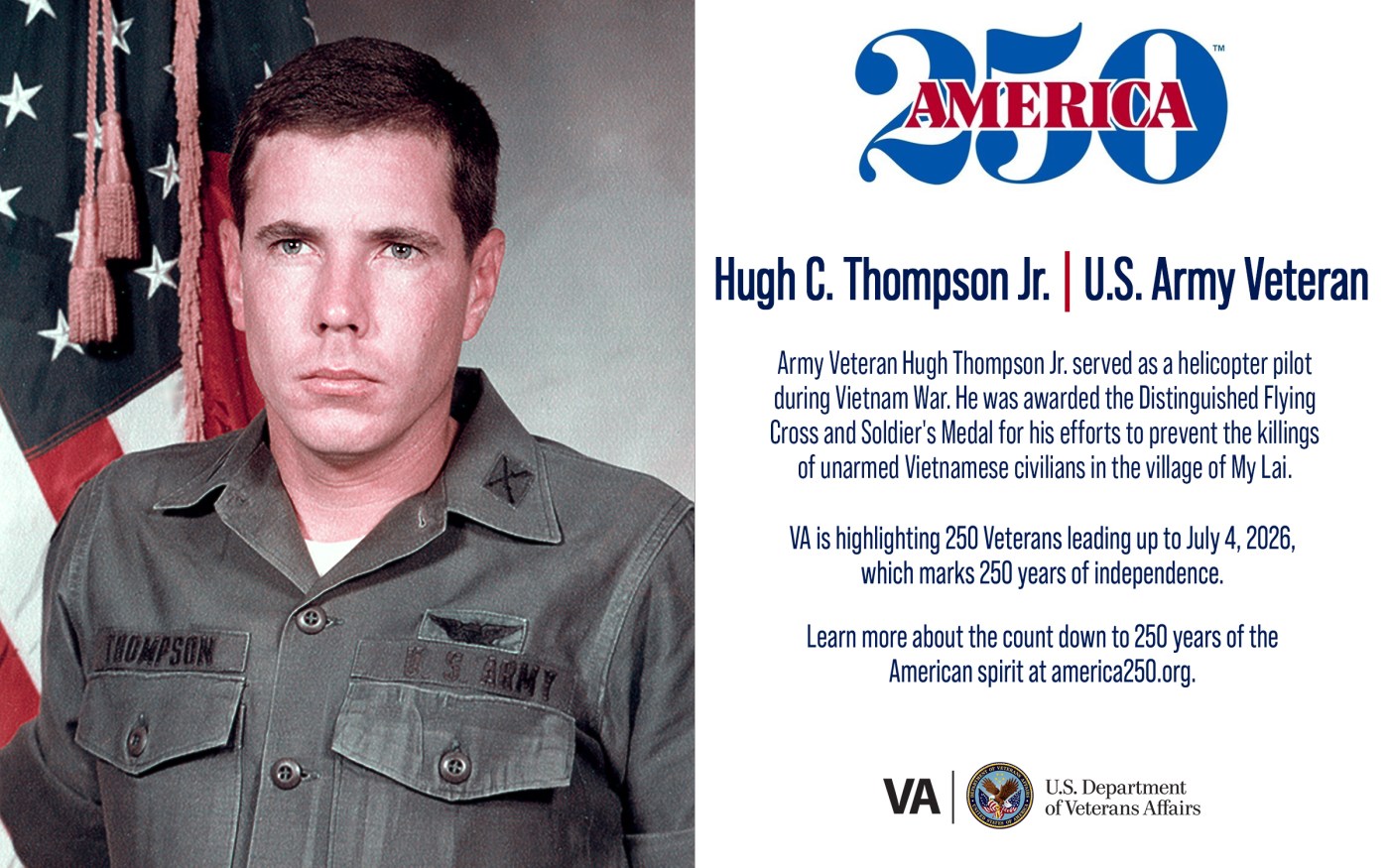 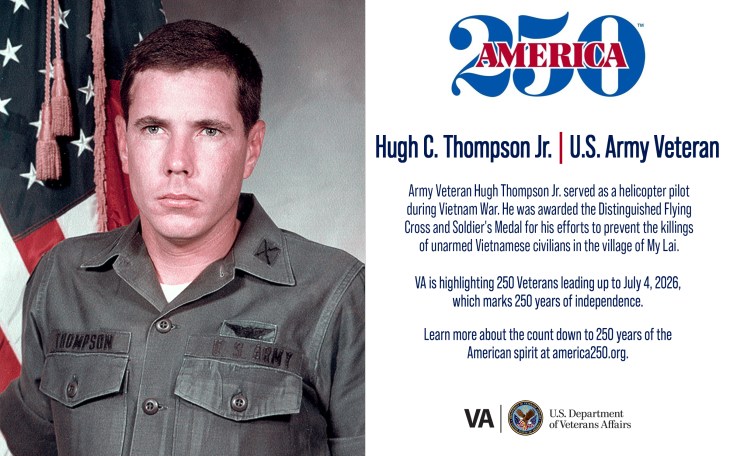 This week’s America250 salute is Army Veteran Hugh Thompson Jr., who saved Vietnamese civilians in the village of My Lai. He was awarded a Distinguished Flying Cross, Purple Heart and Soldier’s Medal.

Hugh Clowers Thompson Jr. was born in 1943 in Atlanta. He was a descendant of the Cherokee Native Americans from his father’s side. His father, a Navy Veteran, served in World War II, and his younger brother served in the U.S. Air Force. After graduating from Stone Mountain High School in 1961, Thompson joined the Navy and spent three years in the Seabee construction unit at Naval Air Station, Atlanta. Following an honorable discharge from the Navy, he started a new career as a funeral director. When the Vietnam War began, he decided to serve his country once again. He enlisted in the U.S. Army in 1966, completed the Warrant Officer Flight Program and learned how to fly a helicopter. In 1967, he deployed to Vietnam, where he was assigned to the 161st Aviation Company and flew a Hiller OH-23 Raven helicopter.

On March 16, 1968, Thompson and his crew members, Spc. Glenn Andreotta and Spc. Lawrence Colburn, were conducting a routine reconnaissance mission. When they saw U.S. soldiers shooting at unarmed civilians, they intervened. Thompson later recalled thinking, “I was pretty upset. What was going on wasn’t right.”

Thompson landed the helicopter in the area between advancing U.S. soldiers and Vietnamese civilians. He convinced the soldiers to stand down while he gathered a small group of women, children and elderly and escorted them to safety with the help of other UH-1 Huey pilots. However, about 500 Vietnamese civilians had already lost their lives.

Upon returning to base, Thompson reported what he witnessed, and the Army issued a cease-fire order preventing any further attacks on civilians. He was awarded a Distinguished Flying Cross for his actions but threw the citation away because it presented a fabricated version of events that occurred at My Lai. He continued to fly reconnaissance missions until his helicopter was shot down and crashed. He broke his back and had to be evacuated to a hospital in Japan. He returned to the United States in 1968.

For many years, Thompson faced criticism and ostracism for standing up against fellow American soldiers. He was accused of committing unpatriotic acts, especially after he testified against soldiers shooting unarmed civilians.

After he left Vietnam, Thompson worked as an instructor pilot in Fort Rucker, Alabama. Before he retired, he was assigned to Fort Jackson, South Carolina; South Korea; Fort Ord, California; Fort Hood, Texas; and Hawaii. He retired from the Army in 1983.

Thompson spent the following years working as a helicopter pilot in the Gulf of Mexico. He also worked as a counselor in the Louisiana Department of Veterans Affairs until 2005.

For his actions during the Vietnam War and efforts to save Vietnamese civilians, Thompson was awarded a Soldier’s Medal. The citation read: “Warrant Officer Thompson’s heroism exemplifies the highest standards of personal courage and ethical conduct, reflecting distinct credit on him, and the United States Army.” The actions of Thompson and fellow crew members have been used by the U.S. and European military as an example of ethics in times of war. Thompson received the award in 1998, 30 years after the My Lai massacre. During the Soldier’s Medal ceremony, his actions were recognized by individuals such as Army Maj. Gen. Michael Ackerman, who said that Thompson and his crewmates “set the standard for all soldiers to follow.” To this day, residents of My Lai keep the memory of Thompson alive. His name and the names of My Lai victims are displayed in a small, local museum.

The film industry recognized Thompson’s actions during the Vietnam War. He and Colburn were interviewed for the movie “Four Hours in My Lai” (awarded British Academy Award and International Emmy) and the book of the same title. He became a public figure and conducted speeches about wartime ethics throughout the United States and abroad. He was also awarded an honorary doctorate at Connecticut College in New London, Connecticut, and an honorary degree from Emory University in Atlanta. In 1999, he and Colburn received the Peace Abbey Courage of Conscience Award “for [their] extraordinary moral courage while stopping the My Lai massacre in Vietnam and saving the lives of dozens of civilian Vietnamese citizens.”

Thompson died from cancer in 2006. He is buried at Lafayette Memorial Park in Lafayette, Louisiana. Four years later, the Hugh Thompson Foundation was established in his honor.