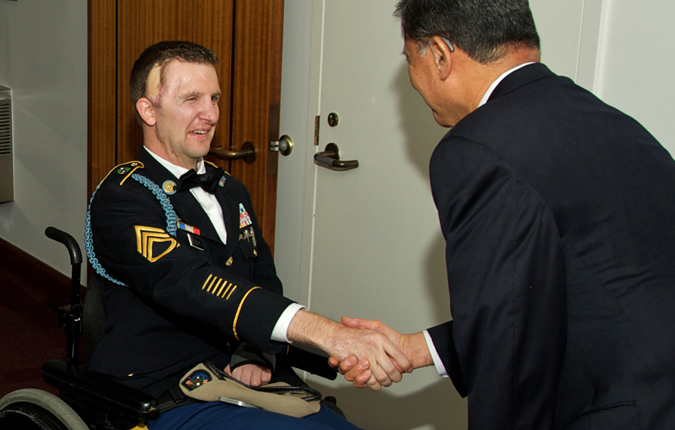 Last night, after years of pain and rehabilitation, Sgt. 1st Class Cory Remsburg sat with the first lady as President Obama delivered the State of the Union address in Washington, D.C. His father and caretaker, Craig, was next to him in the House gallery when the president began to talk about Cory’s injuries and long road to recovery.

“Cory is here tonight.  And like the Army he loves, like the America he serves, Sgt. 1st Class Cory Remsburg never gives up, and he does not quit,” said President Obama.

What followed was a moment that united all in attendance and Americans watching at home. As Cory stood up from his seat with the help of his father, the House chamber erupted with applause. The smile, thumbs-up and a wave from the soldier to the commander in chief was not only endearing – it was a shining glimpse into how far Cory had come.

“This is a once in a lifetime opportunity for him,” said Craig earlier on Tuesday as he and Cory visited VA headquarters to meet with Secretary Eric Shinseki. “There is a lot going on in America today, and if Cory’s story can add some inspiration to people’s lives … that’s what it’s all about.”

Watch last night’s State of the Union address and the standing ovation Sgt. 1st Class Cory Remsburg received from everyone in attendance at the 59:37 mark.

Cory was already a Veteran of 10 deployments when a roadside bomb drastically altered his life. The U.S. Army Ranger was on a routine patrol on the outskirts of Kandahar, Afghanistan, when the blast from an improvised explosive device lifted him off the dusty road and threw him into a nearby canal where his fellow Rangers would later find him.

The right side of his skull sustained serious injuries and it wasn’t clear if Cory would make the medical evacuation, but he continued to fight for his life as he received emergency care continuously from the battlefield to medical facilities in the United States. He might have been down, but he wasn’t out.

Cory said it was important to meet with Secretary Shinseki while in D.C. to express his feelings about the care he received during his recovery – care that, according to Craig, made all the difference for his son.

The medical attention Cory received, chronicled by USA Today’s Gregg Zoroya in 2010, involved attempts at “jump-starting” his brain while he was comatose. The medical staff at the Tampa VA Medical Center tried everything they could to stimulate the Ranger into waking up. Through the emerging consciousness program they gave him commands, physical therapy and even played episodes of Scrubs on T.V.

The medical team’s unwavering efforts paid off, as Cory awoke three months later becoming part of VA’s 70% success rate of wounded warriors who fought back to consciousness.  And that’s when the work began to help Cory regain his mobility and speech.

“Untouchable support and care,” Cory said of his stay at the Tampa VA Medical Center in Florida. “I’ve only been in Phoenix [VAMC] since April, but so far so good.”

Although he is wheelchair-bound and has trouble speaking, on account of the injuries he sustained, Cory is hopeful for the future. His long-term goals are to continue his rehabilitation and regain independence; and he seems to be well on his way to accomplishing these goals. Just two weeks before coming to D.C., he was training in Honolulu with his recumbent bicycle – now riding up to 16 miles at a time.

But getting better and becoming more self-sufficient are only part of his new mission in life. He also wants to make a difference in the lives of other wounded warriors by showing them that it is possible to rise above overwhelming odds.

“To those [wounded warriors] in the future – thank you,” he said with a smile. “To those in the present – follow me.”