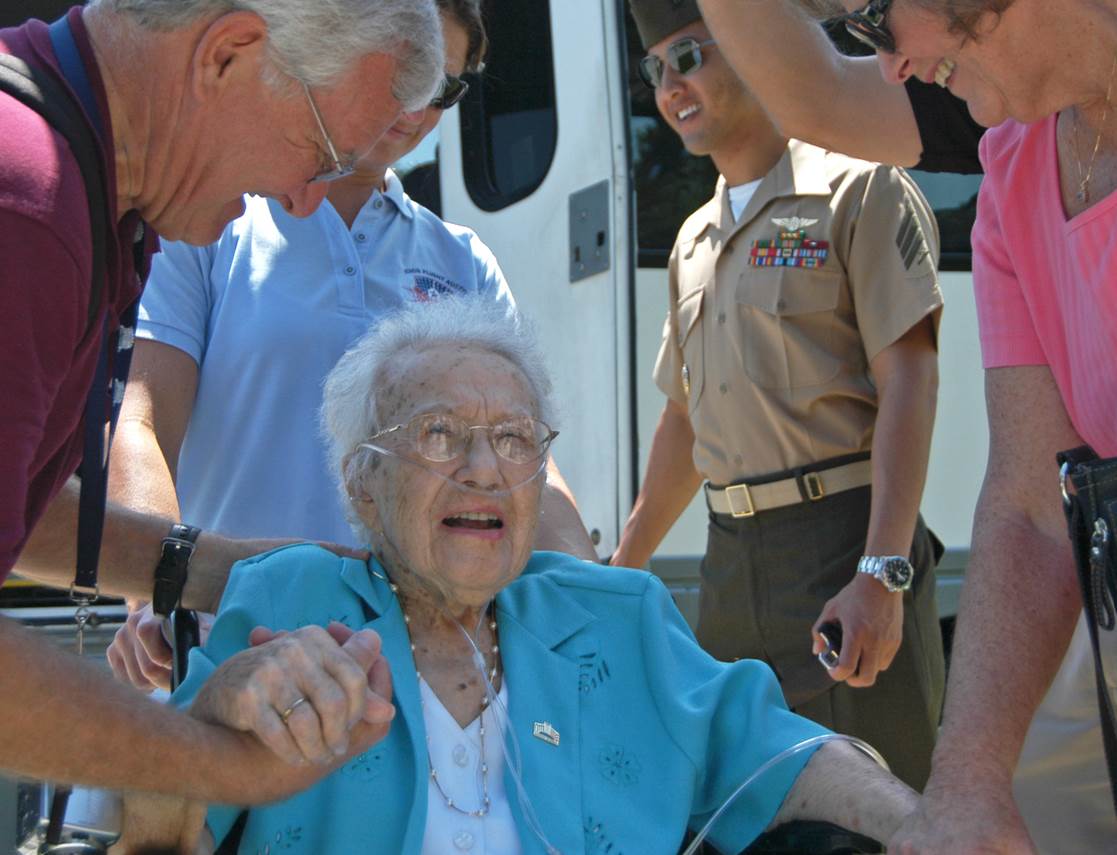 Lucy Coffey’s dream of visiting Washington, D.C. came true this weekend. The 108-year-old San Antonio native arrived with an Honor Flight from Austin Friday night. Her goal was to see, one last time, the memorials dedicated to her generation’s service and sacrifice during World War II.

As a rising junior at the United States Military Academy at West Point, I was immensely honored and excited to cover Lucy’s visit to D.C. After all, we future generations of soldiers learn the most about the military by hearing the stories of our Veterans.

It was a beautiful, sunny Saturday afternoon when I met Lucy at the Women in Military Service for America Memorial. She arrived with family members and an entourage of volunteers from the Bexar County Veterans Service Office who assisted her withevery move. A stroke about a year ago limited her mobility and the oxygen tube she used hindered her ability to speak, but she still gave me an enthusiastic nod when I asked if she was enjoying her visit.

Quickly escorted into the memorial, the frail yet energetic Veteran attended a private tour and a small ceremony and received tokens of appreciation from members of the Women’s Memorial Foundation. As I looked over the different sections of the memorial, I couldn’t help but wonder what it must have been like for a woman to be in the service during her time.

In 1943, Lucy was living in Dallas when she answered the call to join the Women’s Army Auxiliary Corps in the middle of World War II. In a time when female servicemembers were perceived differently than today, the petite South Texan served with distinction. She was present during the Luzcon campaign and was later awarded the Philippine Liberation Ribbon with a bronze star.

Lucy was discharged from the WAAC on Nov. 11, 1945, as a sergeant; however, the Army accountant and statistician stayed in Japan well past her honorable discharge. She was later transferred to the Kelly Air Force Base in San Antonio, where she retired 13years later.

Like Lucy, I’m entering my military career during a transitional period for females in the armed services. While generations of women have joined the military, the opening of combat arms for females in 2016 has created its own controversy. Looking at Lucy I knew that if it weren’t for her and the other women who took the initiative to join the WAAC and step up to the challenge, women today might not even be able to contest the notion that they don’t belong in combat units.

It’s female Veterans, like Lucy, who give me the confidence to say women can excel in combat arms and perform on par with their male counterparts if they choose that path. Female soldiers have shocked society once before. Who’s to say they won’t do it again?

Lena Jordi Cruzval is visiting the VA as an intern. Lena, a “Puertorriqueña” born and raised in Puerto Rico,  received an appointment  to the Unites States Military Academy on Feb. 14, 2012, straight out of high school. She is currently a rising junior at the Academy and is majoring in Comparative Politics with a focus on Latin America. In addition, she is on the Equestrian Team where she has earned three awards: the DeVito award, CPT (Ret.) Jack Fritz Award, and LTC (Ret.) Robert S. Ballagh Memorial Trophy. Lena is fluent in Spanish and French. She loves to travel and has had the opportunity to visit parts of North and South America, Europe, Africa, and Antarctica.